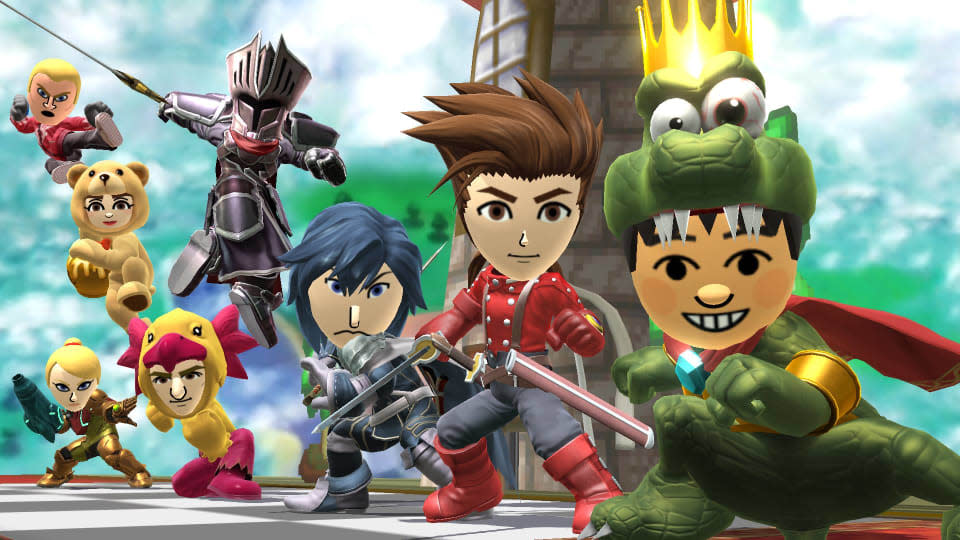 Nintendo isn't done with the 3DS and Wii U versions of Super Smash Bros. just yet. The company has released an update today which adds tournament modes and the ability to post video replays to YouTube. Both features were teased just before E3, but we weren't expecting a slew of new character outfits and stages to go along with them. Nintendo is offering the Hyrule Castle and Peach's Castle arenas from the original Super Smash Bros. on N64, priced at $1.99 per platform or $2.99 across both. They're joined by a deluge of Mii fighter costumes, including King K. Rool from Donkey Kong, Chrom from Fire Emblem: Awakening and Lloyd Irving from Tales of Symphonia. All eight are available for $0.75 or $1.15 across both 3DS and Wii U. Alternatively, you can get everything as a bundle for $9.98 or $15.18 on both Nintendo systems. One last thing: there's a K.K. Slider Mii Fighter costume from Animal Crossing too. It's free to download and looks darn cute.

In this article: DonkeyKong, FireEmblem, nintendo, SmashBros, smashbros., SuperSmashBros, supersmashbrosforwiiu, talesofsymphona
All products recommended by Engadget are selected by our editorial team, independent of our parent company. Some of our stories include affiliate links. If you buy something through one of these links, we may earn an affiliate commission.