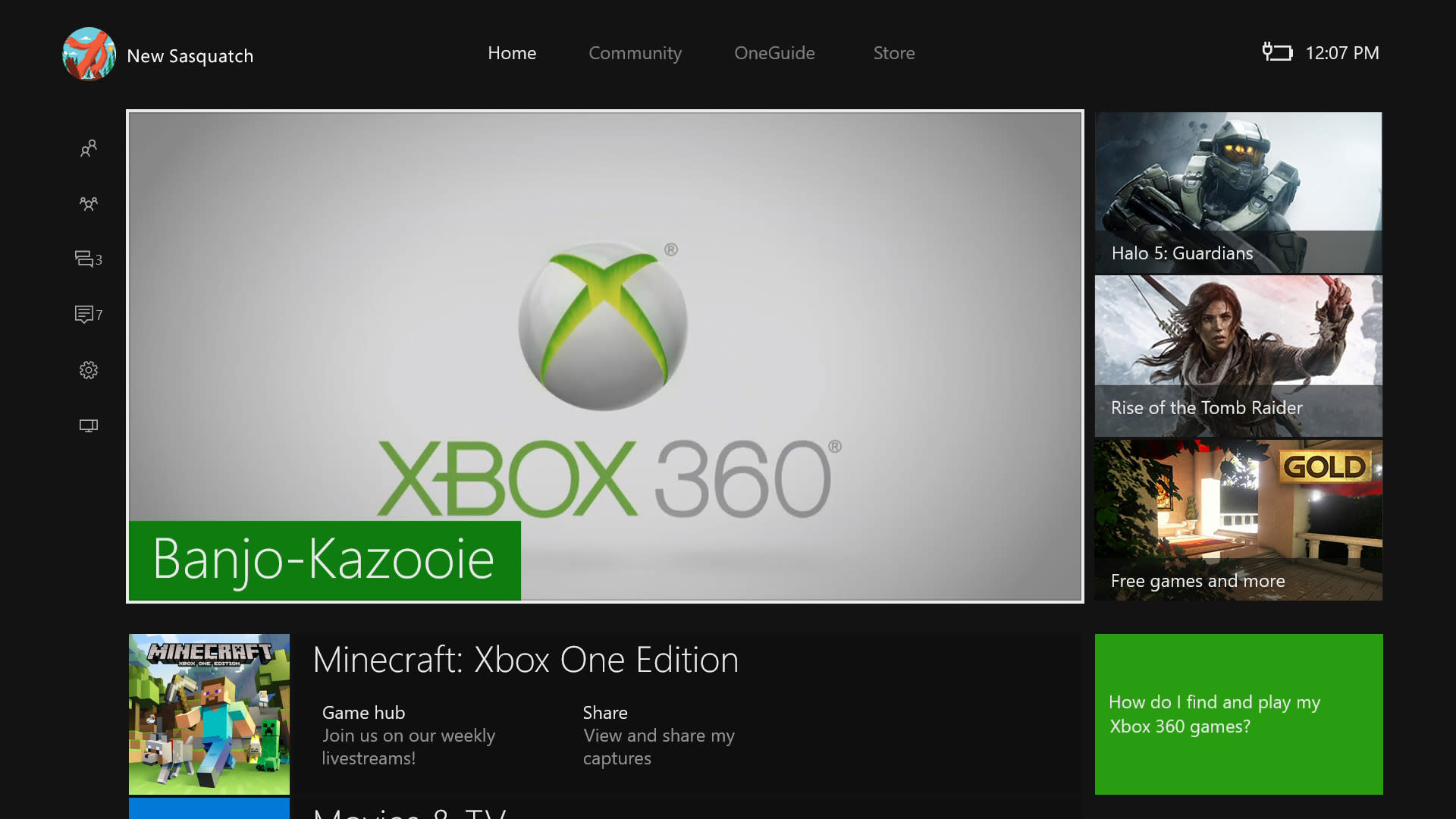 After months of teasing, beta testing and announcements, the Xbox One's big update for Windows 10, an all-new UI and backwards compatibility with some Xbox 360 games will arrive tomorrow. According to Major Nelson, the new software will start rolling out at 3AM ET, although we wouldn't advise waiting up for it for a couple of reasons. First, it's a staged rollout, so you may not get it right away. Second, the ability to play Xbox 360 games (here's the list) won't switch on until 3PM ET, so you've got some time to get ready. Finally, assuming your Xbox is setup for "Instant-on" it should automatically grab the update and install it without you needing to do anything at all. The new Xbox One dashboard has a completely refreshed layout, but there's a lot of info available to help you get used to it.

I've been beta testing it for a few weeks and while it takes some getting used to, the good news is it seems to run faster than the software it replaces. The removal of Kinect gestures from system menus is no big loss, although there have been issues with some games. Hopefully all of those have been resolved through the beta process -- my main advice is to learn the shortcuts (like pressing right trigger to jump to Games & Apps on the home screen).

The New Xbox One Experience—the fastest and most social Xbox experience ever, including the ability to play Xbox 360 games on Xbox One.

Play a growing number of digital and disc-based Xbox 360 games on Xbox One natively, with next-generation features such as screenshots, broadcasting, and Game DVR. Access your previously saved files, game add-ons, and achievements.
Xbox Live Gold members can do multiplayer gaming with friends no matter what console they're on.

With the integration of Windows 10 into the New Xbox One Experience, you can access many popular gaming features up to 50% faster than before.
Instantly start a party, see what your friends are playing, and get updates to your recently played games from Home with no wait time.

Guide: Quickly access essentials with one button press to bring up the new guide. View your friends list, quickly start a party, get to settings, see system notifications, view your messages, and more using the guide, without ever leaving your game.
Community: In the new Community area, see what's trending on Xbox Live and interact with the Xbox Live community by liking, commenting on, and sharing your favorite content. Quickly access the latest updates from friends and game developers through the Activity feed in Community.

Home: Share your screenshots and game clips more easily with the Xbox Live community, and see whether your friends are playing the same games from Home. Scroll up and down to get to your games and apps collection.
OneGuide: See what's trending on live TV in the Xbox Live community in OneGuide. Browse for live TV listings with picture-in-picture, so you don't miss what's happening in your show. With app channels, quickly find something to watch from your favorite video apps—all in one place.
Store: The Store expands to four easy-to-explore areas—Games, Movies & TV, Apps, and Music. The new vertical gallery view brings more listings at a glance. Browse through intuitive categories like Featured Staff picks, New Releases, Top Played, Top Rated, Coming Soon, and Recommendations to discover new games and other content.

Get one-click access to Game Hubs directly from Home to view or launch the last game you played, go to the Store for details about other games, or see what your friends are playing right now on Xbox Live. You can also access news and updates directly from the community and the developers, plus compare gamerscore, achievements, and other game stats with your friends.

In this article: BackwardsCompatibility, hdpostcross, kinect, microsoft, NXOE, update, video, Windows10, Xbox360, XboxOne
All products recommended by Engadget are selected by our editorial team, independent of our parent company. Some of our stories include affiliate links. If you buy something through one of these links, we may earn an affiliate commission.