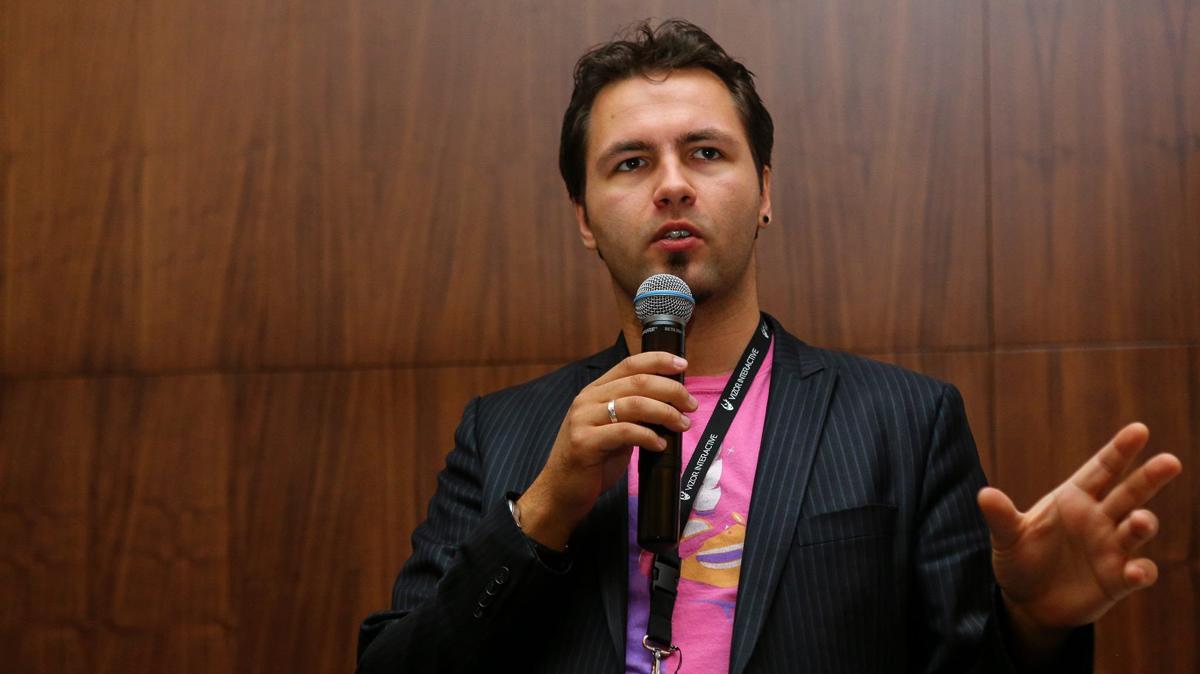 It sounds like a classic Silicon Valley success story: A young, inexperienced entrepreneur drops out of school to pursue his dreams and ends up founding an influential, innovative company. Except, Alex Nichiporchik isn't from California; he's from Latvia. And he didn't drop out of college to follow his passion -- he dropped out of high school. Nichiporchik is the CEO and co-founder of tinyBuild GAMES, the studio behind No Time to Explain and SpeedRunners, and he's leading the indie charge into eSports. Professional gaming is new territory for small studios, which means Nichiporchik has made a lot of it up along the way, from hosting low-quality live streams to producing tournaments with the Electronic Sports League. "We didn't know what we were doing," he says, but "it took off" anyway.

"There's a ton of interest in the investor scene," says Nichiporchik. "It seems like eSports is about to become the social gaming of 2006 or the mobile gaming of 2008."

TinyBuild is in the perfect position to see that interest. This week, the studio announced a cash-prize, European SpeedRunners tournament to be held in collaboration with the ESL over the next three months. It's called the "Go4SpeedRunners Series" and it kicks off in December, with weekly tournaments and a monthly final. It's free to enter the Series and every week, one winner receives 50 EUR; each month after the final match, the top two players split a prize pool of 200 EUR. If this European tournament does well, tinyBuild promises to expand the idea into more territories.

That's still a big "if." Nichiporchik is optimistic that the SpeedRunners community will help make the European series a success, but these tournaments are extremely complicated to set up. And he would know -- he tried to establish a similar pro-gaming series more than 10 years ago, when he should have been in high school. Nichiporchik was a professional Warcraft 3 player in the early 2000s. He says he "didn't make that much money," but he had enough cash to drop out of high school and pursue a career in writing about video games. He also attempted to establish a tournament for Counter-Strike players (he says he "unsuccessfully" played that game in the pro scene). Nichiporchik helped set up something like an online poker room, where all of the players in a match threw in some cash and the winner took all. That was shut down because it was considered gambling -- even though he probably could have disputed that claim.

"We were kids," he says. "We didn't have the resources to set it up properly or to fight it. Now, looking back over 10 years ago, I'm really happy that that is something I had experience with from the other side."

SpeedRunners wasn't conceived as an eSports game. tinyBuild accidentally realized its pro potential when the studio failed to produce an engaging livestream in 2013.

Nichiporchik picked up a job producing Xbox 360 Arcade games before Microsoft's service actually launched, and he eventually ended up working with web-based games. During the Flash era of Super Meat Boy and Newgrounds, Nichiporchik ran across a game called No Time to Explain. He reached out to the developers and asked if they wanted to make it a full, non-web-based title -- there was even this new service that would allow random people to help fund their game. It was called Kickstarter.

No Time to Explain raised $26,000 on Kickstarter in 2011, hitting its funding goal in less than 24 hours (with the help of Minecraft creator, Notch). This was the birth of tinyBuild GAMES and, eventually, SpeedRunners, one of the first indie eSports games in existence.

SpeedRunners wasn't conceived as an eSports game. In fact, tinyBuild accidentally realized its pro potential when the studio failed to produce an engaging livestream in 2013. At the time, it was trendy for developers to stream their game-creation processes and take questions live on Twitch. "We tried that and we kind of sucked at it," Nichiporchik says. So, the team decided to try something different.

The SpeedRunners forums happened to be blowing up with a rivalry between two top players. "They got so good that no one wanted to play against them," Nichiporchik says. One of them was a UK player named Taters McShit and he remains "hands-down the best player" that tinyBuild has ever seen. TinyBuild established the King of Speed tournament so the two players could settle their standoff "Game of Thrones-style," Nichiporchik says.

"We had 200 people tuning in and the chat going wild," he describes. "It made for some fantastic videos, probably some of the best gameplay footage we've had from SpeedRunners."

TinyBuild started hosting King of Speed tournaments regularly -- and that's when the light bulb went off. Nichiporchik and the tinyBuild team had noticed that SpeedRunners attracted large, cheering crowds whenever they showed it off at conventions, but it wasn't until King of Speed that they connected the dots: SpeedRunners was a perfect spectator title and could make for a great eSports-style game.

In those initial, unofficial tournaments, he says the stream's sound quality was awful and there was virtually no production budget. TinyBuild was winging it -- and it was working. Nichiporchik was able to line up deals with the ESL and Gfinity, a large UK eSports league. They hosted events with popular YouTube streamers like PewDiePie, Markiplier, CinnamonToastKen and Dodger, and they even got PewDiePie to play live online against Taters McShit in a partnership with Gfinity. That was SpeedRunners' biggest sales day to date.

Now, tinyBuild has partnerships with the ESL, Gfinity, Alienware and PDP, among other companies. With the Go4SpeedRunners tournament, it's the beginning of a new era for tinyBuild and potentially for independent games in general, if other studios can also wade their way through the complicated path to pro status.

"It has worked, but there's just so much we had to do," Nichiporchik says. "There's a lot of overhead involved that a lot of people may not realize."

The major barriers to entry are community management, lining up business deals and contracts, and overcoming technical challenges. "If you have something that, in two milliseconds, there's an action and a reaction of the player, there's just not enough time to synchronize between the two clients" over Wi-Fi, Nichiporchik says.

Nichiporchik has advice for smaller studios that want to dive into eSports: Make a game that's accessible, but deceptively deep.

"We have to become magicians to compensate for certain things," he continues. "These are the kinds of things most developers do not think about until you encounter that issue."

Nichiporchik, for his part, spent his first year on SpeedRunners simply making sure people were playing the game. His job was to fend off "the curse of indie multiplayer" -- the idea that if no one actually logs on to play an online game, it's dead. TinyBuild's financing stems mostly from sales of its games, namely SpeedRunners for now. Deals with companies like ESL and Gfinity help, and Nichiporchik is always on the lookout for new opportunities. TinyBuild may even make SpeedRunners free in the future, with microtransactions similar to those in Counter-Strike: Global Offensive.

He offers advice for smaller studios that want to dive into eSports: Make a game that's accessible, but deceptively deep. The average player should be able to understand the mechanics at a glance, but actual gameplay should keep a pro practicing for 2,000 hours or more.

As Nichiporchik puts it, "Any kind of game that is one of those crowd-pleasers at PAX, that has a really good chance."

Image credits: tinyBuild GAMES / Alex Nichiporchik
In this article: AlexNichiporchik, esports, hdpostcross, Indie, NoTimeToExplain, ProfessionalGaming, speedrunners, tinybuild, tinyBuildGames
All products recommended by Engadget are selected by our editorial team, independent of our parent company. Some of our stories include affiliate links. If you buy something through one of these links, we may earn an affiliate commission.