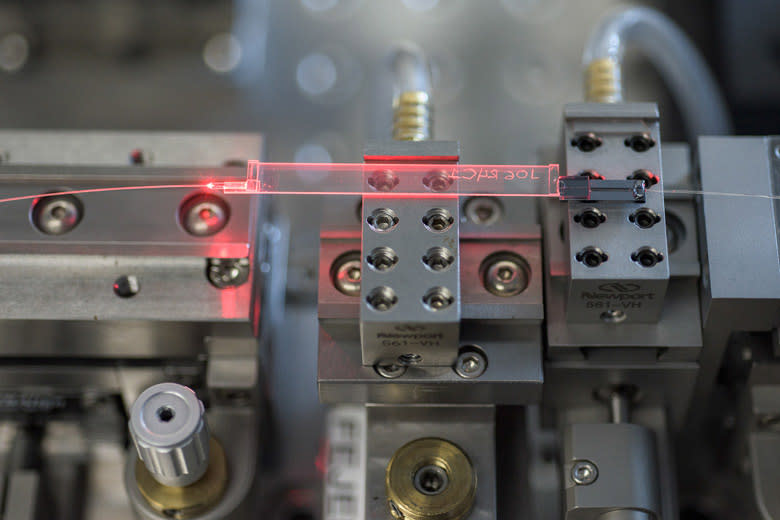 Researchers at Stanford University announced Tuesday that they had successfully leveraged the "spooky" interaction of entangled electrons to send a message between them over a span of 1.2 miles. This is by far the longest distance that scientists have managed to send entangled particles and provides the strongest evidence to date that quantum computing can have practical applications.

Quantum computers exploit the phenomenon known as quantum entanglement, what Einstein famously referred to as "spooky action over distance", wherein two particles are connected regardless of the distance between them. That is, as in this case, if two electrons are entangled, the direction of their spin will always be the same. If one electron is spinning clockwise, the other will be too. If one reverses the direction of its spin, the other will as well. Doesn't matter if they're on the opposite sides of a molecule or on opposite sides of the galaxy, the two particles and their behaviors are inextricably linked.

"Electron spin is the basic unit of a quantum computer," Stanford physicist Leo Yu said in a statement. "This work can pave the way for future quantum networks that can send highly secure data around the world." The problem is that electrons are confined to atoms. And in order to get two electrons to entangle over long distances (and allow their quantum computer networks to communicate with one another) they need photons to act as the messengers.

This is accomplished by "pairing" the photon and electron, a process called "quantum correlation". But that runs into another issue: photons love to change the direction of their spin while travelling through fiber optic lines. So while you can get the first electron and the photon to correlate pretty easily, keeping the photon on task as it travels to the second electron is way more difficult. To overcome this, the Stanford team created "time-stamps" for the photons that act as reference points for the photons, allowing them to confirm that they arrived with the same spin orientation that they left with.

Using this method, the team successfully entangled a pair of electrons over 2 kilometers of fiber optic line. Their research has been published in the journal Nature Communications.

In this article: electrons, FiberOptic, internet, lasers, quantumcomputing, science, spookyaction, Stanford
All products recommended by Engadget are selected by our editorial team, independent of our parent company. Some of our stories include affiliate links. If you buy something through one of these links, we may earn an affiliate commission.