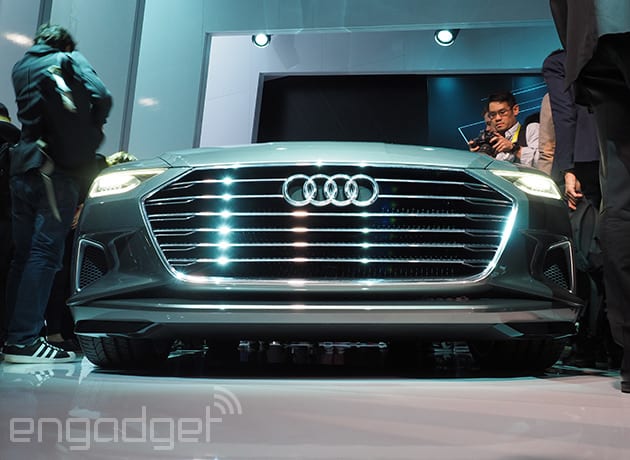 Audi's press event this morning began more like a best-of tour or a walk down memory lane covering every year Audi has been at CES. This year's showing then rolled on to focus on its Prologue concept car, which appeared dramatically onstage at the touch of an as-yet-unannounced LG smartwatch. Audi's Ulrich Hackenberg then went on to discuss the A7 piloted-driving car that drove itself from San Francisco to this show; that's more than 550 miles. If you were around for Audi's event last year, you'll likely remember the Audi tablet, which was announced, but never really shown or detailed in any meaningful way. That tablet will finally make a real appearance in the 2016 Q7 and enable passengers to control car functions and infotainment while driving. We'll have more details on everything Audi has to show soon, so in the interim, have a peek at the gallery for a few more shots.

16
In this article: audi, CES, ces2015, hands-on, prologue
All products recommended by Engadget are selected by our editorial team, independent of our parent company. Some of our stories include affiliate links. If you buy something through one of these links, we may earn an affiliate commission.