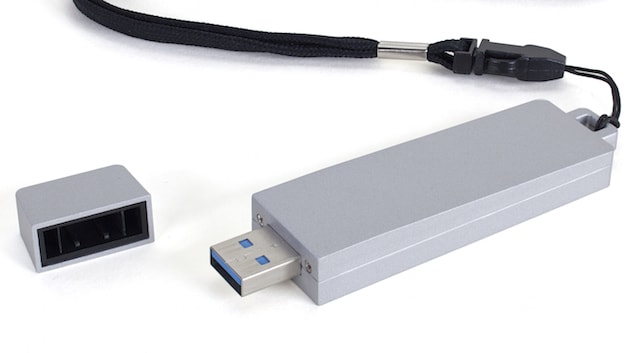 While flash "thumb drives" are convenient, cheap and come in a variety of capacities, they don't exactly thrill users with their speed. Other World Computing yesterday announced the Envoy Pro mini, a USB 3.0 SuperSpeed SSD drive in the form factor of one of the ubiquitous flash drives.

The drive, which won the Storage Visions 2015 Visionary Product Award for Mobile Consumer Storage, is packed in a sturdy aluminum enclosure and can be used for storing and transferring data or backing up your Mac.

Unlike a traditional USB 3.0 flash drive, you could also probably get away with installing an OS X beta onto the Envoy Pro mini for test purposes since it should be much faster. OWC says that the drive "achieves sustained transfer speeds up to 433 MB/s".

The Envoy Pro mini will be shipping in January in two sizes: 120GB (US$119) and 240GB ($199). OWC also announced that the drive will be available soon in a 480GB capacity with price to be determined.

In this article: accessories, CES 2015, Envoy Pro mini, Mac, Other World Computing, OWC, SSD, thumb drive
All products recommended by Engadget are selected by our editorial team, independent of our parent company. Some of our stories include affiliate links. If you buy something through one of these links, we may earn an affiliate commission.