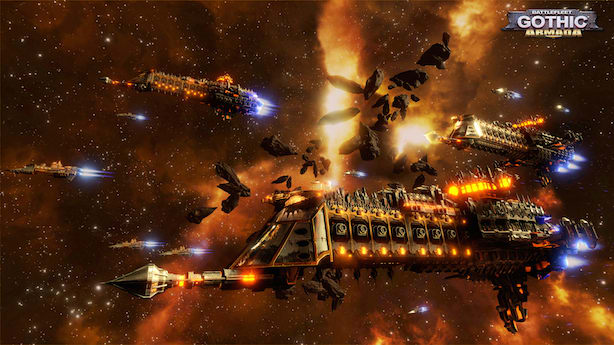 Players will command fleets comprised of ships from Imperial, Chaos, Eldar and Ork forces. Leaders can also customize the weaponry, defense and support sub-systems of ships within their fleet, altering their performance and battle-specific special abilities. Experience and promotions will also be awarded to ships as they survive bouts of war.

Armada isn't Tindalos Interactive's first crack at the RTS genre; the studio shared a glimpse of its futuristic, fight-over-precious-resources RTS Etherium early last year. We're still waiting to see how that turns out though – Etherium is currently scheduled to launch its assault on PC sometime in 2015.
[Image: Focus Home Interactive]

4
Via: Polygon
Source: Focus Home Interactive
In this article: battlefleet-gothic-armada, focus-home-interactive, Real-Time-Strategy, rts, tindalos-interactive, Warhammer-40K
All products recommended by Engadget are selected by our editorial team, independent of our parent company. Some of our stories include affiliate links. If you buy something through one of these links, we may earn an affiliate commission.