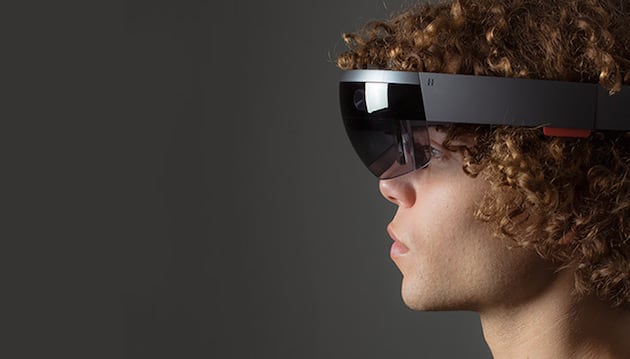 Without a doubt, the biggest surprise from today's Windows 10 keynote at Microsoft's Redmond campus was the outfit unveiling its HoloLens headset. Dubbed as the "first fully untethered, holographic computer" the device and its capabilities looked pretty neat -- if a little fantastical -- onstage when Alex Kipman showed it off. But for all his talk about breaking down the walls between technology and people, there are a surprising amount of them around exactly what the device is packing under the hood. We asked every person at the event that we could (developers, public relations folks, engineers) about the specs of the dev kit we tried, and were shot down at every turn. No one would give a single, concrete detail. So let's break down what was said during the stage demo (embedded below) and what Microsoft has released via the HoloLens website instead, shall we?

Kipman promised "see-through holographic, HD lenses" today. Whether that's full HD, as in 1080p, or the lower (but still technically HD) 720p resolution is up in the air, but it's a fair bet they weren't running at 4K like the Surface Hub. Why's that? Well, 4K is a pretty big tech buzzword at the moment, and it didn't cross Kipman's lips once during his presentation.

Surprise, the vagueness keeps rolling on this front too! There are at least four cameras or sensors on the front of the HoloLens prototype (you can see 'em in the GIF below). Beyond them being "advanced," it's anyone's guess what they do or what they're totally capable of, but looking at the Kinect 2.0 might give us a better idea of what's going on behind the scenes. That gizmo rocks a depth camera, infrared sensor, a 1080p color camera and was released over a year ago. Based on computing advances since then (and Moore's Law), it's perfectly reasonable to assume that whenever the headset does come out, it'll be much more powerful and capable than the Kinect 2.0 is.

Because HoloLens is processing terabytes of data in real time, it needs more than your typical central and graphics processing units, according to Kipman. That's why Microsoft invented a holographic processing unit that's able to understand gestures, voice and spatially map the environment you're in, all without markers, cameras, phones, PCs or wires -- necessities for the likes of Oculus Rift and Gear VR. Granted, when we were able to spend time with a development kit, it was very much none of those things; you're required to wear a small, heat-generating computer around your neck, for instance. As our Senior Editor Ben Gilbert eloquently says in his hands-on piece, it's "like what Flavor Flav would do with a computer." This dev kit wasn't shown onstage because, well, it wouldn't have been nearly as impressive to see exposed wires, circuitry and a silicon weight around someone's neck.

It took the folks at Oculus three revisions to get to the point where its virtual reality headsets had built-in sound, and it's one of the key differentiators between the Crescent Bay and DK2 prototypes. HoloLens has built-in spatial audio as well, so, in Kipman's words, you can hear holograms even if they're behind you. How that actually will play out is going to depend on each experience, and based on Ben's impressions, what he got a chance to test out didn't merit mentioning.

The likely reason that no specs have surfaced yet is because the tech is still in early days and the hardware is likely very far from its final form. Wondering why there's only so much here? Because Microsoft refused to tell us, or anyone else, more than what you see here. The firm learned from its last gaffe in that area and doesn't want to build any false expectations or draw comparisons between HoloLens and other products until it has something concrete in place. Good on them for that! But until then, we're left guessing what will help us experience "more reality than ever before."

In this article: hdpostcross, hologram, hololens, microsoft, specs, windows10event2015, windowsholographic
All products recommended by Engadget are selected by our editorial team, independent of our parent company. Some of our stories include affiliate links. If you buy something through one of these links, we may earn an affiliate commission.