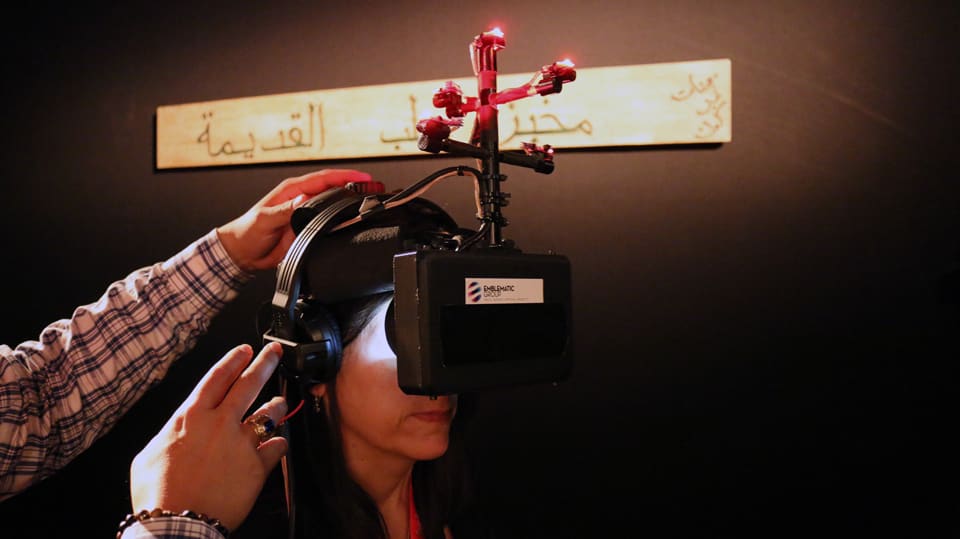 Let that stand as your introduction to Nonny de la Peña, the woman pioneering a new form of journalism that aims to place viewers within news stories via virtual reality. That vision has culminated in Emblematic Group, her content- and VR hardware-focused company that she runs along with her brother in Los Angeles. 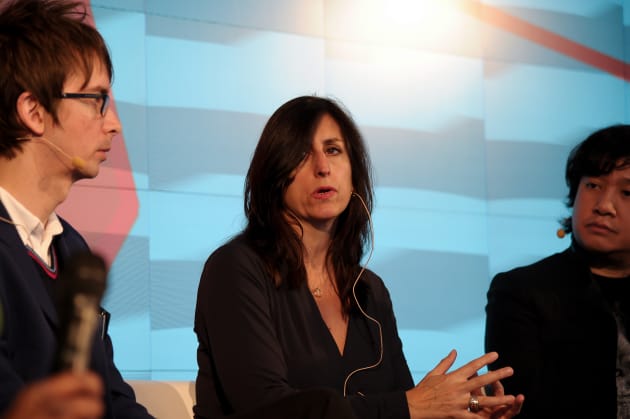 De la Peña's resume runs the gamut, including work on documentary films, television dramas and a longtime stint as a correspondent for Newsweek. But her name almost always surfaces in connection with the boy billionaire, Oculus VR founder Palmer Luckey, who served as her intern and provided a prototype Oculus Rift when she debuted Hunger in LA at the Sundance Film Festival in 2012. That first VR piece was displayed at New Frontier, an exhibit within the festival that focuses on works that meld technology, art and filmmaking. Hunger served as an entry point to De la Peña's brand of immersive journalism as it dealt with the true story of a diabetic's collapse due to starvation while waiting in line at a food bank in Los Angeles.

"I was really kind of a nightmare because I was so nervous, right?" De la Peña admits, speaking of her VR debut. "It was the first one. I was so scared to go in the world. And then the opening night, when the first people to take off the goggles started crying, I think it blew all of our minds. ... And then nine months later came the Kickstarter for Oculus. And last spring when Palmer ... when they sold the company to Facebook, I texted him, "Thank you so much." Because look. [Gesturing to the New Frontier exhibit around her.] Look at this place now. Look at what's happening here. It's so fabulous!"

De la Peña's right to be so giddy, to take a certain pride in the explosion of VR projects (11 in total) dominating New Frontier. Many of the artists exhibiting this year, like Chris Milk with Evolution of Verse, Rose Troche with Perspective and Danfung Dennis' Zero Point, drew inspiration from seeing her original work and linked up with other like-minded creatives to begin exploring the VR space.

"This is such a visceral empathy generator. It can make people feel in a way that nothing, no other platform I've ever worked in can."

But the fanfare and accolades flowing De la Peña's way are only a recent development. It wasn't always like this. The warm embrace was once a stiff, cold shoulder. "Back in 2012 when I launched Hunger in LA, I was still considered such a weirdo," she explains. "I had colleagues literally pointing their finger at me and saying, 'You can't do that. That doesn't work. It's not ethical. It's too subjective.' And I got so much criticism. It was really difficult."

De la Peña chalks up much of that early anxiety and resistance to the medium's newness, as well as the transformations surrounding traditional notions of journalism. She concedes it was a scary time for old-guard journos that felt like "their lives were being threatened by digital technologies." The introduction of an additional technological layer, virtual reality, certainly didn't ease those fears either. 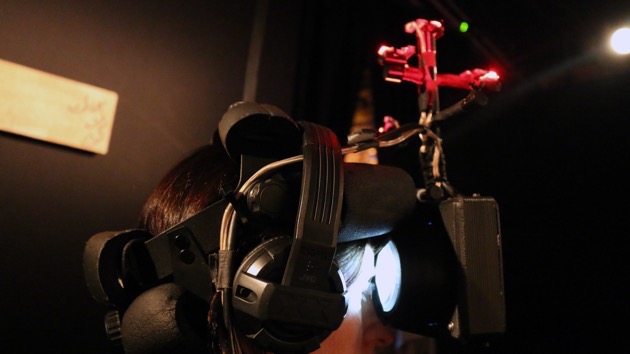 The tides have since turned for De la Peña who was once jobless when she spent $700 of her own money to fund Hunger. Now, her work is being funded by the likes of the University of Southern California (where she's studying for her doctorate), Tribeca Film Institute, Google, Associated Press and the World Economic forum, which commissioned this year's exhibit, Project Syria.

A fully immersive sociopolitical work that utilizes computer-generated graphics, as opposed to live action with human actors, Syria places Sundance attendees within the aforementioned Arab country where the experience moves through three distinct moments: a calm street scene, a sudden bombing and a camp for refugee children. It's a testament to the alternate hardware approach De la Peña's taken with her VR hardware that Syria really allows the viewer to feel transported into another reality.

"Last spring when Palmer ... when they sold [Oculus] to Facebook, I texted him, 'Thank you so much.' Because look. Look at this place now. Look at what's happening here. It's so fabulous!"

"I love Oculus, but it's a sit-down experience. They don't really want you walking around," says De la Peña. "And I can spend $3,000 on my goggles instead of $300 right now. Right? I can get higher-end components to make it crisper and get a wider field of view. And I can set up my own tracking system. This is a phase-based tracking system, which I have to tell you, is still one of the best in the world. You know what? It's really good." 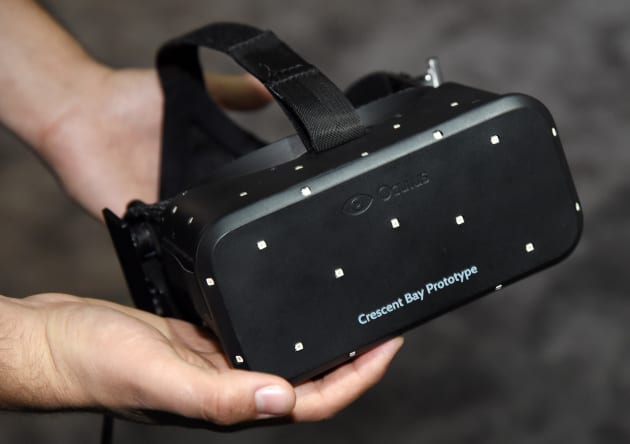 That boast is not without merit, either. Motion sickness is one of the most persistent hurdles to making VR a mass-market consumer technology. It's why Facebook's acquisition of Oculus makes sense -- billions of dollars in research are required to overcome the medium's Achilles' heel and make the experience a seamless one for all users.

It's also the one major con to VR that I consistently encounter. Unlike some of my colleagues that regularly cover the VR space, I seem to be part of that small, but nonetheless important minority that's prone to motion sickness. Indeed, when I experienced Perspective, another VR work at New Frontier, I had to close my eyes and take several deep breaths to keep from throwing up. That did not happen with Project Syria and De la Peña's gear.

"I had colleagues literally pointing their finger at me and saying, 'You can't do that. That doesn't work. It's not ethical. It's too subjective.'"

"In general, I think we report less levels of nausea. I know we do, because I collect data. ... I collect data also beyond my anecdotal, my observations. I actually collect information data to inform how to make better pieces," says De la Peña.

That's not to say De la Peña's being dismissive of the Oculus approach. She likens the two companies' differing solutions as being akin to "TV vs. movie theatre." She also concedes that it likely won't be her company Emblematic Group that delivers the VR industry's coup de grâce when it comes to tracking tech and a motion sickness solution. "Honestly, I presume somebody else is going to solve the headgear problem before we are," she says. "I mean, that's not what my number one goal has been because there's so many billions of dollars [thrown] at this and huge people." 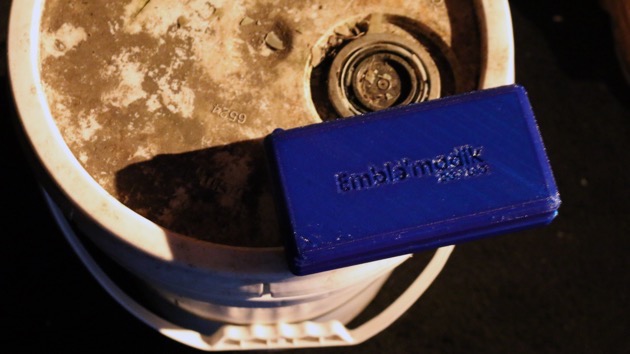 There is a bigger picture in mind for Emblematic Group, though. De la Peña's vision for the fledgling startup company she's founded with her brother (the man responsible for creating the vast majority of her hardware) is nothing if not ambitious. With a deep background in media, she's confident Emblematic can become a content juggernaut covering everything from entertainment stories to tech stories to general news and human rights pieces. At present, she's even deep in development with a major Hollywood director on an unspecified fiction project, in addition to working with The Guardian, BBC and Al-Jazeera.

In a sense, it's almost as if De la Peña envisions Emblematic becoming a sort of virtual reality news network -- think: the CNN of VR. When I asked if she had any interest in hiring on and training journalists in this new form of immersive journalism, De la Peña's eyes sparkled with that glint visionaries often have. "That would be a dream come true. It would be a dream come true to do that."

"We understand content here. But the crazy thing is we've turned out to understand a bit of hardware too," says De la Peña. She is, of course, referring to the VR headset that she and her brother specced up and 3D printed out of their mother's garage. The end goal being that, with the proper, deep-pocketed funding, Emblematic can tackle the higher-end consumer VR market. "Oculus is wonderful for everybody," she says. "And maybe we'd be the high-end folks. Because I think that's what we do best."

In the near-term, however, Emblematic is gearing up to release an affordable VR viewer. Think of it as Emblematic's competitor to Google Cardboard. Zig Zag, as she and her brother have deemed it, is a collapsible VR viewer that, when closed, resembles a hard, plastic eyeglass case. De la Peña showed it off to me during our interview and admitted that it was "hot off the 3D printer this week." 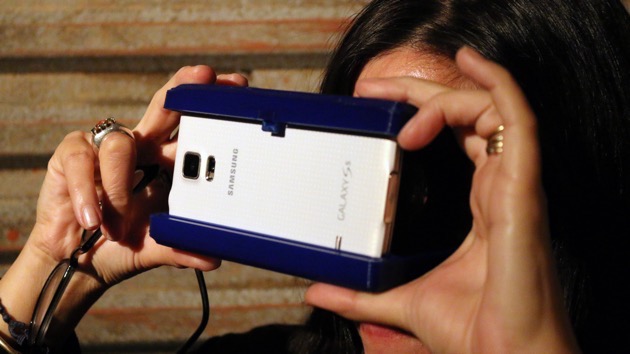 Zig Zag works much like Gear VR and Cardboard in that it requires the use of an Android phone to power the experience. The actual "hardware," however, apart from its lenses, which she independently sources, contains no moving parts or processor; it relies entirely on the smartphone to power the experience. And, unlike Google's flimsy Cardboard, it's durable. "It's not going to break or bend," she says.

Ultimately, De la Peña would like to distribute Zig Zag through Emblematic's site, but she's also considering a Kickstarter campaign and is in talks with an unnamed partner that's interested in ordering 10,000 units. She's confident that Emblematic can offer Zig Zag for a relatively inexpensive price.

"It's really nice not to feel vulnerable anymore. I think Keri Putnam, the head of the festival here, put it best when she said to me, 'You don't have to justify yourself anymore.'"

While De la Peña is focused on the high end, she sees opportunities for devices like Zig Zag to work in conjunction with the 3D-imaging tech in Google's Project Tango. That technology is where De la Peña sees VR inevitably headed on the consumer end. "Right now, we're looking at 360-[degree] video as very realistic stuff and I'm still doing a lot of CGI stuff," De la Peña says. "They're gonna merge. And we're already merging it now. You're going to use your Project Tango on your phone and you're gonna just res-up a scene you just [scanned]. And it's gonna turn into a 3D model right away that people can see. That is for sure the future."

The novelty of the medium may have initially aroused disdain from her peers, but De la Peña doesn't think the world at large will throw up the same level of resistance to VR. She points to her young children as examples of digital natives that don't fear technology. They've already become accustomed to living in virtual gaming worlds like that of Minecraft. And, besides, she insists the technology's already matured enough to the point where it's no longer considered a moonshot; it's already practical for consumer use.

"I don't know why people get so terrified by technology. ... Look, I'm the one that could tell you. I would know. I would know. I took so many hits," she says. "The criticism I've gotten over the years, you have no idea. It's really nice not to feel vulnerable anymore. I think Keri Putnam, the head of the festival here, put it best when she said to me, 'You don't have to justify yourself anymore.' And that is the truth. That's why being at this moment with everybody here ... it's so gorgeous. So again, thank you Palmer Luckey."

In this article: EmblematicGroup, gear vr, gearvr, NewFrontier, nonny de la pena, nonnydelapena, Oculus, OculusRift, PalmerLuckey, ProjectSyria, Sundance, Sundance2015, SundanceFilmFestival, virtual reality, virtualreality, VR, ZigZag
All products recommended by Engadget are selected by our editorial team, independent of our parent company. Some of our stories include affiliate links. If you buy something through one of these links, we may earn an affiliate commission.