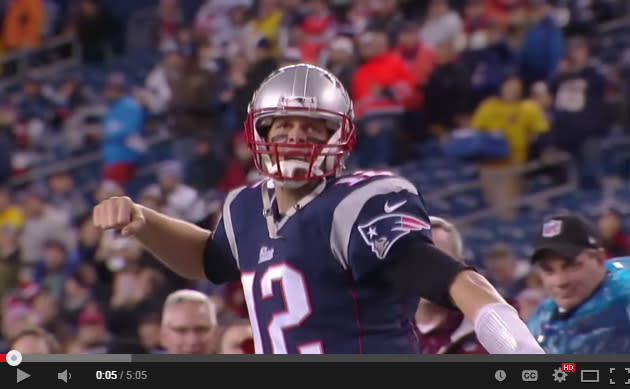 It had to hurt when Facebook made a deal with the NFL to play video clips before YouTube, but Google has finally announced its own pact with the league just in time for the Super Bowl. There's now an NFL YouTube channel for official highlights, and Google will also show video, scores, broadcast times and other info in its search results. For instance, typing in "New England Patriots" now brings up the score and a recap of the team's AFC championship game against the Colts, along with a video preview for the Super Bowl. Re/Code reported that in exchange for access to in-game footage, Google will split ad revenue with the league.

YouTube will only carry clips and not entire games to avoid competing with the NFL broadcasters -- NBC will livestream the entire Super Bowl, for instance. However, it's a long-overdue step for the NFL, which has only recently dabbled in selling digital content rights. It's also a welcome change for fans, as YouTube's NFL previews and recap packages are quite complete (see below), and don't appear to be region locked -- good news for Euro fans and expats. YouTube has now struck deals with all four major US sports leagues, and conversely, it's now possible to catch NFL highlights on Twitter, Facebook and YouTube.

In this article: clips, deal, google, highlights, NFL, video, YouTube
All products recommended by Engadget are selected by our editorial team, independent of our parent company. Some of our stories include affiliate links. If you buy something through one of these links, we may earn an affiliate commission.