The best stylus for your iPad or other touchscreen device

The best iPhone and iPad accessories 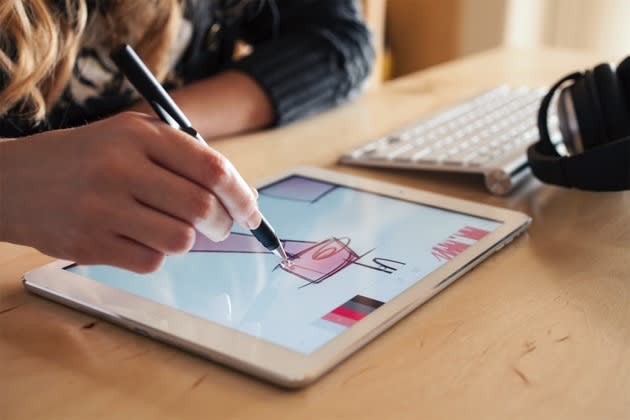 If you're into tablet-style sketching, you're likely familiar with apps like FiftyThree's Paper or Adobe's Sketch and Line. Now, stylus maker Adonit has a sketching app that's designed to not only get the most out of its drawing accessories, but to boost your productivity as well. The software is called Forge, and its simple interface keeps tools handy, but out of the way so you can focus on the task at hand. When you need to create multiple versions of the same sketch -- a logo project, for example, -- the app allows you to easily copy the drawing and build on top of it, organizing the old and the new on separate layers. As a designer myself, that's been the most useful thing about Forge: the ability to try new things with the same idea quickly and easily, without mucking up the original.

There's also a Project Wall that acts like the wall of studio, allowing you to see all of your work side-by-side as needed. A Portfolio view displays all of the projects in the app for an overall look at the whole lot. Forge is available now over at iTunes for free, but if you want more space (pages) to work, you'll have to open up your wallet for the paid version.

14
Source: Adonit
In this article: adonit, adonitforge, app, art, creativity, design, drawing, forge, productivity, sketch, sketchbook, software
All products recommended by Engadget are selected by our editorial team, independent of our parent company. Some of our stories include affiliate links. If you buy something through one of these links, we may earn an affiliate commission.