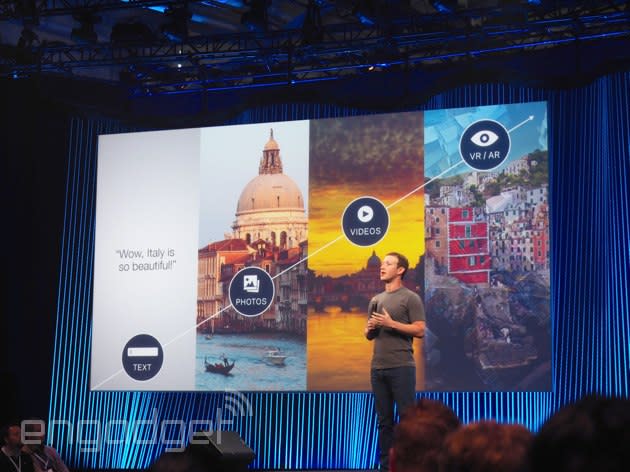 In an effort to bring even more content to Oculus, Facebook has announced at its developer conference that it plans to bring spherical video content to its VR headset. There really isn't a whole lot more information aside from that -- how will people get these 360-degree videos? -- but it's an important step forward in enhancing the nascent VR platform. Additionally, Facebook also announced that it'll begin to support these 360-degree videos embedded right in the News Feed, so you won't need a headset to check them out if you don't mind not having that whole VR thing.

I had a chance to try out the new 360-degree video viewing experience in one of Facebook's "Teleportation Stations" at the developer's conference. As soon as I donned the Gear VR headset, I saw moving images of people walking around me, as if I was really there in that faraway courtyard instead of the hot and sweaty exhibition hall. It wasn't tremendously exciting, as I wasn't able to actually interact with anyone around me, but it was a good demonstration of the spherical video content that Facebook hopes to push with Oculus and VR in general. I'm betting that some of that content will likely be available for download from the newly announced Oculus-powered app store in the near future. Now if only we could get a 360-degree camera on our smartphones...

In this article: f8, facebook
All products recommended by Engadget are selected by our editorial team, independent of our parent company. Some of our stories include affiliate links. If you buy something through one of these links, we may earn an affiliate commission.