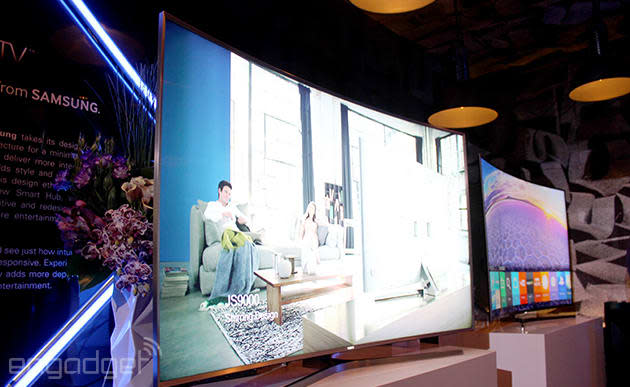 Samsung's latest and greatest ultra-HD television will cost you big bucks -- but it's also got a healthy selection of affordable options among its latest round of 4K TV sets. The JS9500 SUHD TV (the "S" denotes its premium UHD range), effectively the Korean electronics giants' crown jewel for 2015, will start at $6,500 when it lands later this month. It sports a curved screen with nanocrystal technology (something that appears in all of its SUHD sets), a full array local dimming backlight (which helps with contrast and black levels) and the company's "PurColor" technology, which delivers more vivid colors. You'll be able to snag the JS9500 in 65-inch and 88-inch sizes -- though the company isn't saying just how much the larger version will cost. Most likely, that'll be upwards of $10,000, as that's the price for the 77-inch JS9100 SUHD TV. While Samsung's 4K pricing is pretty much on-par with last year's high-end sets, which went for around $5,000 for 65-inch entries, it's nice to see a variety of options at the lower end of the spectrum. There's also more of a reason to snag a 4K set this year, with a wider availability of UHD content coming from Netflix, Amazon, and others. Samsung's also a founding member of the UHD Alliance, which is focused on building up the 4K ecosystem. On the software side, all of the company's 2015 Smart TVs are running its Tizen OS, which powers a snappier user interface alongside its octa-core processors.

To match its new range of curved TVs, Samsung also offered up details on its latest round of curved soundbars. They start at $500 for the J6000 soundbar and wireless sub, and run all the way up $1,300 for the J8500, which supports high-definition audio and fits 65-inch and 78-inch sets. If you want a more realistic surround sound setup, you could also pair them with the company's new omnidirectional Radiant 360 "ring speaker."

In this article: 4K, hdpostcross, J6000, J8500, JS8500, JS9000, JS9500, Radiant 360 R7, samsung, SUHD, TV, UHD
All products recommended by Engadget are selected by our editorial team, independent of our parent company. Some of our stories include affiliate links. If you buy something through one of these links, we may earn an affiliate commission.