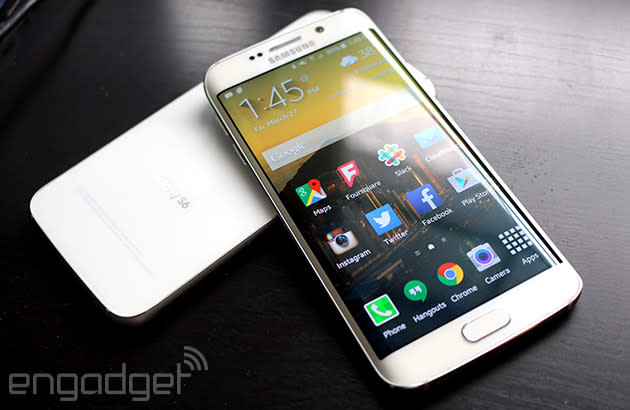 Samsung mobile head J.K. Shin has warned that supply constraints could hamper sales of its Galaxy S6 Edge smartphone. According to Reuters, Shin revealed production yields of the phone's unique curved display are low, meaning that the company may not be able to keep up with demand. Samsung is "working hard to resolve the difficulty in supply," but yields could be low "for a while." The issue will not affect the vanilla Galaxy S6, which has a more conventional flat display.

The S6 Edge and the regular S6 were received well by reviewers and Samsung predicts they will outsell the disappointing Galaxy S5 they replace. The S5 is widely regarded as a miss for the company, with the S4 still considered the pinnacle of its sales success. The disappointing S5, coupled with a more competitive landscape thanks in part to Apple's larger iPhones, have seriously affected Samsung Mobile's financial performance. With the outlook for its most recent quarter not looking great, it's banking on the dual flagships to help revive its embattled (but still very successful) division.

Strong sales will also help Samsung's other businesses, as the new flagships will be sold worldwide with home-grown Exynos chips inside. Although each iteration of Galaxy S devices has launched with a new Samsung chip, for many years the company has opted for Qualcomm Snapdragon processors over Exynos for the North American market, costing its semi-conductor division millions upon millions of chip sales. That trend ends tomorrow, when both the Galaxy S6 and S6 Edge go on sale in 20 countries worldwide.

In this article: curved display, exynos, galaxy, galaxy s6, galaxy s6 edge, mobilepostcross, samsung, snapdragon, supply
All products recommended by Engadget are selected by our editorial team, independent of our parent company. Some of our stories include affiliate links. If you buy something through one of these links, we may earn an affiliate commission.