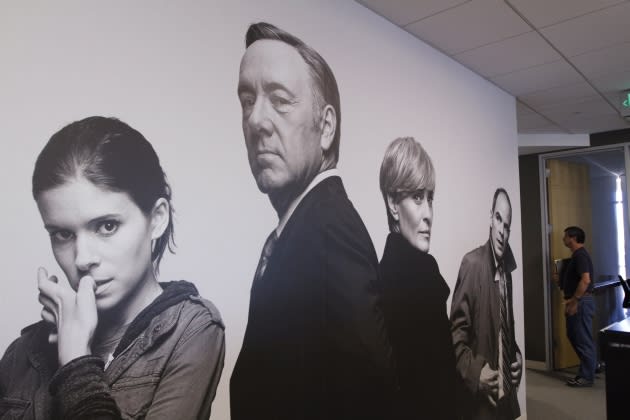 This quarter's Netflix earnings report is especially interesting because it's the first one since HBO's online-only Now service launched, so investors and other looking to see how it responds to direct competition. The streaming company just announced that it not only added nearly five million subscribers in the last three months, but it has a new UI coming for its TV apps in the second half of this year. It's described as bringing video playback "forward" into the browsing experience, but there's not much more detail available and Netflix isn't talking yet. We're wondering if Netflix could start pushing live streaming channels like traditional TV, or just video previews that start playing even before you choose what to watch. At CES in January, director of corporate communications and technology Cliff Edwards told us that it's looking to put internet TV on the same footing as cable, and a new way of using its apps could do a lot to help that.

As usual, Netflix will broadcast its earnings call live on YouTube at 6PM ET, and the video is embedded below. If there's any news from there, we'll update the post and let you know.

Where Netflix is clear is about plans to "evolve" to using HTTPS instead of HTTP while browsing and watching. That's good news for keeping your credentials safe on shady WiFi hotspots and possibly keeping your boss from knowing exactly what you've been streaming at work. While video streams were already DRM-protected, it was possible to ID what users were watching, and some analytics companies said they could do just that. According to Netflix's Mark Watson, its reasoning for not doing so before was server strain, but it appears to have worked around that.

As we mentioned, it was a big quarter for Netflix adding subscribers, three months ago it predicted 4.1 million people would be joining and it actually added 4.9 million. Now there are over 59 million people worldwide paying for Netflix, with 40.32 million of those people in the US. CEO Reed Hastings told investors that the third season of House of Cards had its biggest launch ever in terms of viewers (Netflix doesn't release numbers), while Unbreakable Kimmy Schmidt has been a "hit" and Bloodline is "on par" with other shows.

Net neutrality also gets a mention, as Netflix applauded the FCC's new rules. In response to controversy over its decision to pay Australian ISPs so customers could stream without it counting against their bandwidth caps, Hastings said Netflix should have avoided doing that, and will avoid it going forward. As far as its HBO rivalry, Hastings is the one taking the Albanian army approach, saying the two don't substitute for each other because they offer different content. As far as he sees it, there's room for both to flourish going forward.

Source: Netflix Q1 2015 Letter to Shareholders (PDF)
In this article: earnings, financials, hdpostcross, HTTPS, netflix, q1, q12015, streaming
All products recommended by Engadget are selected by our editorial team, independent of our parent company. Some of our stories include affiliate links. If you buy something through one of these links, we may earn an affiliate commission.