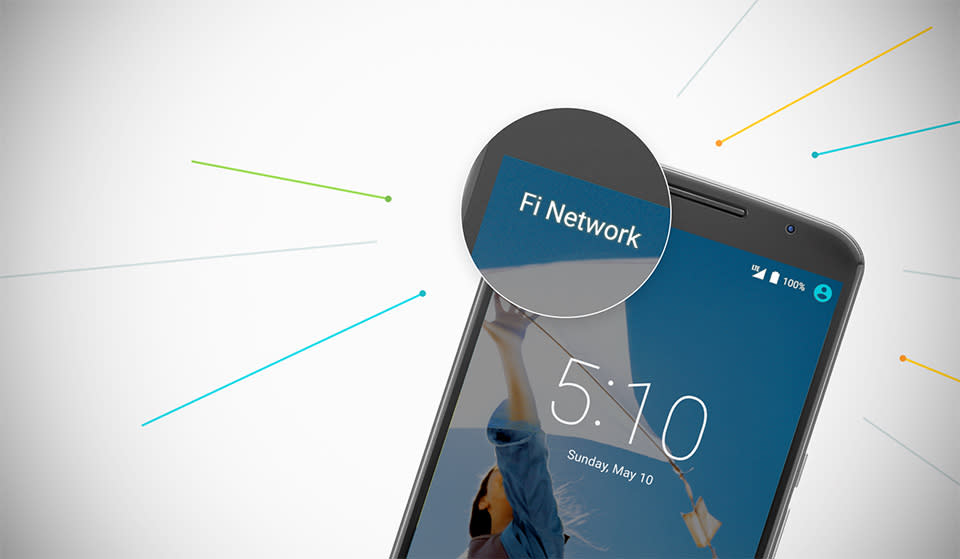 Rumors of Google breaking into the wireless carrier game have been fodder for scoops, breathless reports and thinkpieces for years now, and for the longest time it looked like the search giant just couldn't make it happen. Yesterday Google put all that to rest. Project Fi is finally here (if invite-only and fully compatible with one phone) -- here's what you absolutely need to know about it.

What is Project Fi?

At its most basic, Project Fi is a mobile phone service that promises unlimited domestic talk and text, unlimited international messaging, tethering and 2G-only international service in over 120 countries (thanks to T-Mobile's rather dope roaming agreements) for as low as $30 a month. You get to decide how much data you want to pay for -- more on that later -- and you'll get a tidy refund for whatever data you don't use when the month is over.

Really though, the best way to look at Fi is as an ambitious experiment in mashing up existing networks. The heart of the service is a mobile mesh that combines Sprint's and T-Mobile's coverage areas with over a million of WiFi hotspots meant to give you the most reliable service wherever you are. Some of those hotspots will pop up exactly where you expect them -- like 7,000 US Starbucks stores, for instance -- while plans to bolster free public WiFi networks in cities with Google Fiber are well-known. And the rest? Well, they're all open networks (your data will get routed through a Google VPN to keep it secure) that Google's got in a quality-control database. Of course, how well this'll actually work in practice is another story. The beauty of Project Fi is that, despite all the crazy-cool network jumping going on, you just use your phone the way you always have. Once you sign up, you'll get a new phone number or bring over your existing one, and you can access it from a slew of compatible devices. It's sort of like what Apple's done with iMessage and its phone-friendly Continuity features, except across any computer, tablet or smartphone that plays nice with Google Hangouts. Want to check your voicemail or send your mom a cheesy Mother's Day text? You can do it from your office Chromebook, that iPad chilling on your coffee table and even that Surface Pro you keep trying to use on airplane tray tables. The name of the game here is seamlessness.

Same goes for your actual phone calls. Let's say you're on one of Google's approved WiFi networks -- if you're on a call and wander too far from the source, the phone will switch you onto Sprint's or T-Mobile's data network depending on which is stronger to keep things flowing sans interruptions. Thing is, Fi's meatiest part only works with one device right now: the Nexus 6. Motorola's phablet is the only device with a radio certified to shift between Sprint's and T-Mobile's networks without batting a proverbial eyelash and it'll cost you (but more on that later). It's possible that Project Fi will also support the older, cheaper Nexus 5 at some point since the same phone could be activated with either Sprint or T-Mobile service, but for now, N5 owners are out of luck. You didn't expect Google to open this up to the masses all willy-nilly, did you? Just like Gmail, Wave and Google+ before it, Project Fi is an invite-only Early Access Program for the time being, so you'll have to throw your name into the hat by registering here. Google hasn't said exactly when that first batch of invites will start hitting inboxes, but you should expect a response one way or the other within 30 days of registration. The requirements are pretty straightforward, though: As long as you live an area where Fi has coverage and you own (or are willing to buy) a Nexus 6, you're eligible to take the service for a spin. Thing is, neither T-Mobile nor Sprint have spectacular rural coverage, so those of you in more remote climes -- sorry Montana -- might not get your invites for a while.

Is it really such a good deal? Erm, maybe. It all comes down to what you need, and let's be real -- Fi isn't perfect for everyone. First off, there are no family plans here, making Fi a better choice for individual enthusiasts itching for something a little different. If that's you, you're going to pay $20 a month for the so-called Fi Basics noted above. Each gigabyte of data service will cost you $10 after that, and that's where things can get a little iffy. T-Mobile's most basic plan with unlimited talk and text plus 1GB of high-speed data will run you $50 a month, while the same amount nets you 3GB of data across Sprint's and T-Mobile's networks on Fi. If you're on a cushy, older T-Mobile plan though, you might be better off staying put. CEO John Legere announced earlier this month that all of those juicy promo plans aren't going anywhere (unless you're still clinging to one with unlimited data).

Meanwhile, Sprint offers a flat $60 rate that promises unlimited talk, texting and data access each month, along with even slower international roaming in a handful of countries. It's important to note that some of Project Fi's broad strokes aren't exactly new -- we've seen upstarts like Republic Wireless and FreedomPop push the vision of a WiFi-centric mobile service for years now, so you could get a kinda-sorta similar experience for quite a bit less. Republic, for example, offers unlimited talk, text and 4G data for $40, though you'll lose out on Fi's network-spanning and international chops.

All of this presumes you're OK toting around a whopper like the Nexus 6 as your daily driver. Since Project Fi has ditched the contract model completely, there aren't any hardware subsidies either -- that means you'll have to pay $649 for a 32GB model or $699 for the 64GB version if you haven't already. Thankfully, you can pay for the phone in monthly installments... if you pass a credit check, anyway. For the vast majority of people, Project Fi will just be another cool, mildly kooky thing Google cooked up, and chances are they'll never think about it again. When Google SVP Sundar Pichai said Fi was like the company's Nexus device program, he wasn't kidding -- it's not a mainstream service, but one geared toward people who really care about new, ambitious, arguably half-formed products. Early adopters. People who clamor for the bleeding edge, the newest of the new.

What Fi represents, though, is another story entirely. At this point, it's not clear how visible the network switches will actually be, but considering how seamless Google wants to make the process, we wouldn't be surprised if you, the user, never actually know whether you're cruising on Sprint's or T-Mobile's spectrum. If that really is the case, Google's basically turned both carriers -- carriers that hate each other, no less -- into dumb pipes that deliver your texts and Japanese game show videos without you ever having to deal with a pushy salesperson. Google is very respectfully telling these companies that they're commodities, parts of a thoughtful mobile experience the carriers themselves can't create. More importantly, it's showing us how the wireless landscape, the one with carriers at each other's throats, sort of sucks. Whether or not Fi succeeds financially is one thing. The bigger question (and the one we can't answer just yet) is whether the industry shifts to respond to Google's work. Pipe dream? Wishful thinking? We'll soon find out.

In this article: carrier, fi, google, mobile, mobilepostcross, mvno, network, project fi, project-fi, projectfi, sprint, t-mobile
All products recommended by Engadget are selected by our editorial team, independent of our parent company. Some of our stories include affiliate links. If you buy something through one of these links, we may earn an affiliate commission.