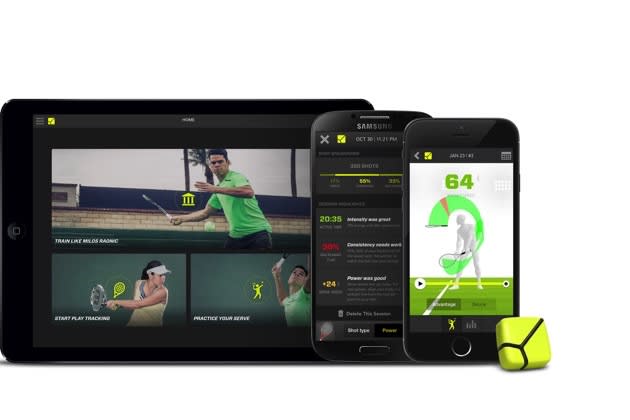 Just in time for the French Open, sports-tracking firm Zepp is launching a big update to its tennis app. The simply named Tennis 2.0 app works with the company's multisport sensor -- a bright, little widget that attaches to golf clubs, baseball bats and tennis rackets. We've taken a few swings with the sensor in batting cages and on tennis courts in the past, and while we praised its ease of use and the fact that it worked with most any bat/racket, we thought the accompanying tennis app lacked the depth of competing options like Babolat's Play series or Sony's Smart Tennis Sensor. Now, Zepp's significantly beefed-up app looks to address many of those concerns.

The Tennis 2.0 app adds some new tricks while filling in some of the holes in existing features. The original app, for instance, offered a power rating for your various shots and serves, but used a mysterious and proprietary unit of measurement rather than, say, miles per hour. The updated app thankfully fixes that issue and adds some much-needed MPH ratings to gauge your power. It also boasts in-app training videos and more robust comparison options so you can track your progress over time -- something we noted the original app sorely lacked. Without some hands-on time, we can't say whether the update improves Zepp's shot-detection -- one of the drawbacks we noted earlier. That said, the list of updates is welcome and should make the upgrade a no-brainer. The app itself is a free download and users on both Android and iOS should be able to grab it later today. If you're new to Zepp's platform, though, $150 gets you the sensor, charger and mounting kits for most any racket.

Source: Zepp
In this article: fitness, FitnessTracker, mobilepostcross, sensor, Sports, Tennis, Zepp
All products recommended by Engadget are selected by our editorial team, independent of our parent company. Some of our stories include affiliate links. If you buy something through one of these links, we may earn an affiliate commission.