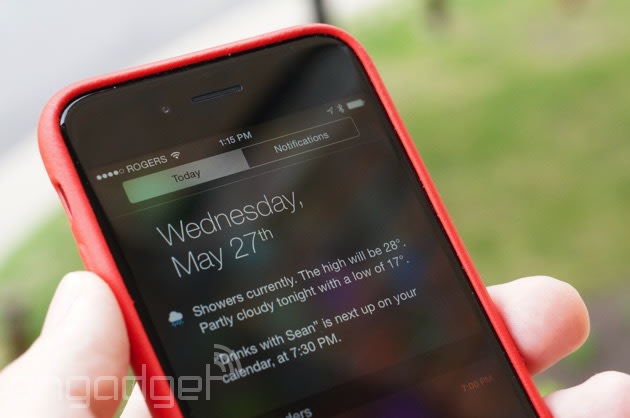 Apple has made some efforts to give you relevant info when you need it (such as iOS' Today screen), but it hasn't really had a response to Google Now, which brings you everything from timely directions to cheap flights. According to 9to5Mac's sources, however, that's going to change soon. The crew at 1 Infinite Loop is reportedly working on Proactive, an effort to unite Siri, contacts, schedules and apps in a way that surfaces info at just the right time. A revamped Spotlight search screen in iOS will automatically fill with content based on your schedule and habits. If you're going on a trip, for example, it'll pop up your Passbook ticket when it's time to go; if you always check Facebook in the morning, you'll get an app shortcut. There are also promises of restaurant suggestions showing up at meal time.

There are other projects in the works that could help out Proactive, too. Maps is believed to be getting an augmented reality tool, Browse Around Me, that will help you learn more about points of interest -- look at a coffee shop and you'd get its menu. There would also be a shrunk-down version of Siri's voice recognition service that would let it dive into apps without risking the privacy issues that arise when you're sending personal data to third-party software.

Whether or not Proactive and its companion features show up in iOS 9 isn't clear. The tipsters understand that Apple is still focused on quality for the next mobile OS release, and it may cut back on features for the initial launch in favor of expanding them over time. It won't be shocking if Tim Cook and company show up at next month's Worldwide Developer Conference with only a few Proactive features, if they even discuss it at all. Given how rough iOS 8 was in its early days, we wouldn't blame the iPhone maker for holding off.

Source: 9to5Mac
In this article: apple, internet, ios, ios9, ipad, iphone, mobilepostcross, proactive, siri, smartphone, spotlight
All products recommended by Engadget are selected by our editorial team, independent of our parent company. Some of our stories include affiliate links. If you buy something through one of these links, we may earn an affiliate commission.