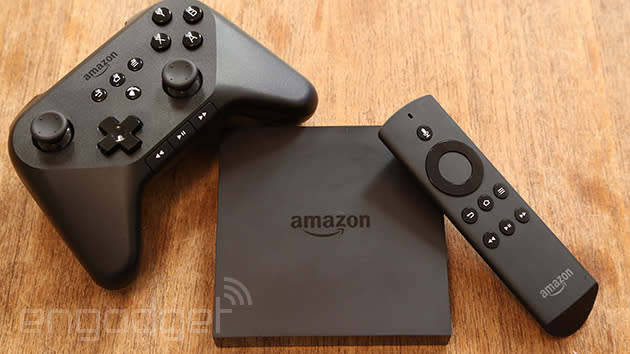 Its ability to do everything, from video-streaming to gaming, makes the Fire TV a solid home entertainment product. And people in the US are starting to take note of this. According to Strategy Analytics, an independent firm that researches the consumer market, Amazon's Fire TV accounted for 30 percent of streaming set-top box shipments in Q1 2015. During this period, which measures numbers from January 1st to March 31st, a total of 3.5 million units were shipped to US consumers, with Fire TV picking up steam despite being introduced over a year ago. That said, the Apple TV is reportedly still king of the streaming set-top space, having shipped more than 15 million units to date -- not bad for a hobby, Apple.

In this article: Amazon, Amazon Fire TV, AmazonFireTV, Fire TV, FireTV, hdpostcross, streaming, streamingvideo, videostreaming
All products recommended by Engadget are selected by our editorial team, independent of our parent company. Some of our stories include affiliate links. If you buy something through one of these links, we may earn an affiliate commission.