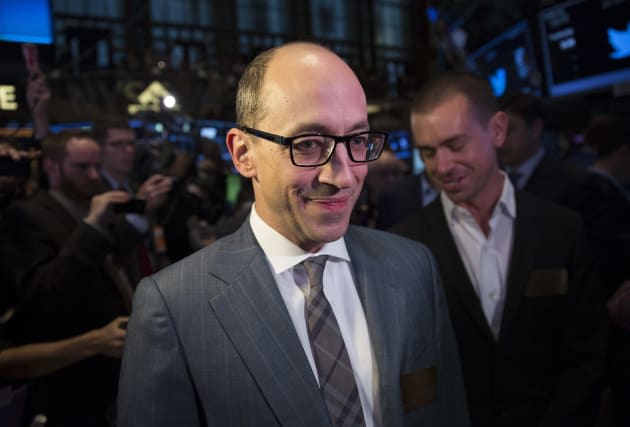 Twitter's stock slid significantly in April when its earnings report leaked out early, and in a likely-related move, now it's changing CEOs. Dick Costolo is out (at left in the picture above, taken during the company's IPO), although he will remain on the company's board, while founder, chairman, first user and former CEO Jack Dorsey (at right) is taking over again on an interim basis. He will stay on as CEO at Square while a search committee -- including yet another former Twitter CEO, Evan Williams -- searches for a permanent replacement. Of course, that the report leaked isn't the problem, it's the user growth, which couldn't match other social network stars like Instagram. Investor Chris Sacca recently published a lengthy blog post about "what Twitter could be" and despite a number of changes over the last year, it appears many of the folks owning shares had different ideas than its (as of July 1st) former leader.

Update: According to Costolo (on a conference call) he initiated discussions with the board about stepping down "late last year." Jack Dorsey followed up by stating that the change has "no connection" to the company's near term results.

Costolo stepped up from the role of COO to replace Williams in 2010, initiating a period of many changes in the company's strategy, plus acquiring companies like Atebits, Vine and Periscope. Atebits was a third party Twitter app developer, but after its acquisition, Twitter started putting tight limits on other similar apps while steering users to the official one. So far, the introduction of Periscope has shown a similar path as the company has battled another live video streaming service, Meerkat. Whatever's going on with Twitter, we may learn more on the call at 5:15PM ET. You can listen in here, or check back for any updates.

Our CEO, @dickc, will step down as CEO, and we'll welcome @jack as Interim CEO on July 1 #TWTRannouncement: http://t.co/q8Ygg91jzc

Dick Costolo to step down as CEO, will remain on Board, and Jack Dorsey appointed Interim CEO, effective July 1

Thank you for everything @dickc! You're a selfless leader who's built an amazing team and company #proud https://t.co/52z4TIYIUh

[Image credit: Bloomberg via Getty Images]
Source: TwitterIR (Twitter), Twitter (PDF)
Coverage: TechCrunch, Bloomberg, Washington Post, Recode
In this article: breaking news, CEO, dickcostolo, jack, JackDorsey, twitter
All products recommended by Engadget are selected by our editorial team, independent of our parent company. Some of our stories include affiliate links. If you buy something through one of these links, we may earn an affiliate commission.