Amazfit's HomeStudio is a smart mirror paired with a treadmill 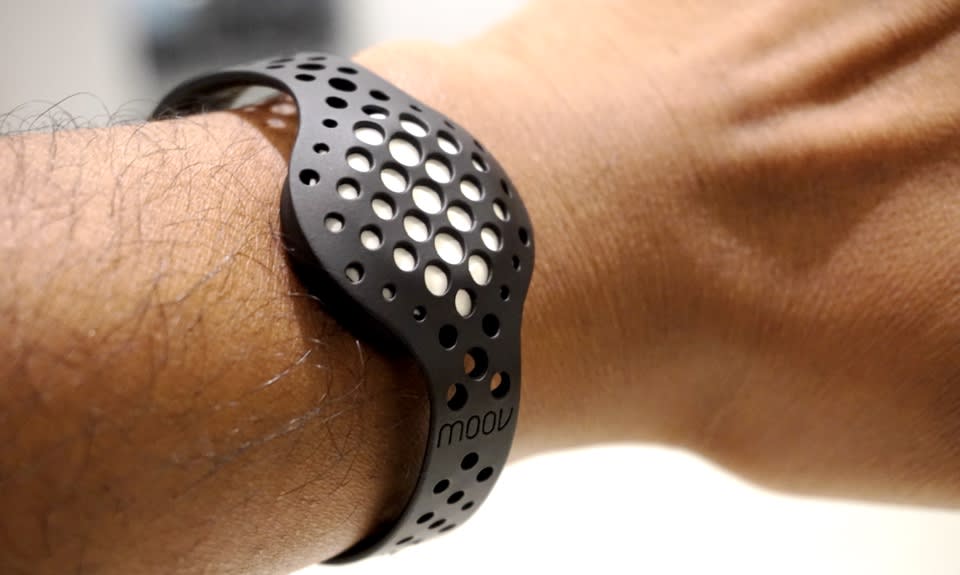 Moov made a name for itself last year with its first fitness wearable, which did a whole lot more than count your steps: It actually tracked your body's movement in three dimensions and used that data to power mobile personal trainer apps. Now, the company is back with the MOOV NOW, a smaller and slimmer device meant to help you achieve the ultimate workout. It works pretty much the same as the original MOOV: You can strap it to your wrist, arm, or ankle and use a variety of apps to track specific workouts. You also receive advice from a virtual fitness coach based on your exact movement, for example if your running stride is too hard, or if your swimming strokes aren't strong enough. But while the first device was practically as big as a typical watch face, MOOV NOW is around the size of a quarter. It also relies on replaceable watch batteries for up to six months of typical usage, while its predecessor had to be charged every few days. You can preorder MOOV NOW today for $60 (it will retail normally for $100), and it's expected to ship later this fall.

Given the onslaught of fitness wares we're seeing these days, it's easy to dismiss what Moov is doing as yet another exercise tracking offering. But judging from what I saw in a brief demo, it's aiming for entirely different territory. Co-founder Nikola Hu strapped two MOOV NOWs to his wrists and was able to accurately shadowbox with one of the company's mobile apps. It also tracked the gradual increase of his running pace when he moved the device to his ankle. It's more like using Microsoft's Kinect than it is wearing a Fitbit or Jawbone tracker. MOOV NOW sports an accelerometer, gyroscope and magnetometer, all of which helps it detect your motion in three dimensions.

Since it can effectively detect how you're moving, and not just how much, Moov's devices could be far more useful than typical trackers. For beginners, it can help them gradually get the hang of new workouts. And for more experienced fitness nuts, it can help them hone their form to clock better times and avoid injury. There's also potential for Moov beyond the fitness arena -- since its technology can track movement in 3D space, it could end up being something useful for virtual reality, or for gesture control on computers like Leap Motion.

5
Source: Moov
In this article: fitness, Moov, MOOVNOW
All products recommended by Engadget are selected by our editorial team, independent of our parent company. Some of our stories include affiliate links. If you buy something through one of these links, we may earn an affiliate commission.