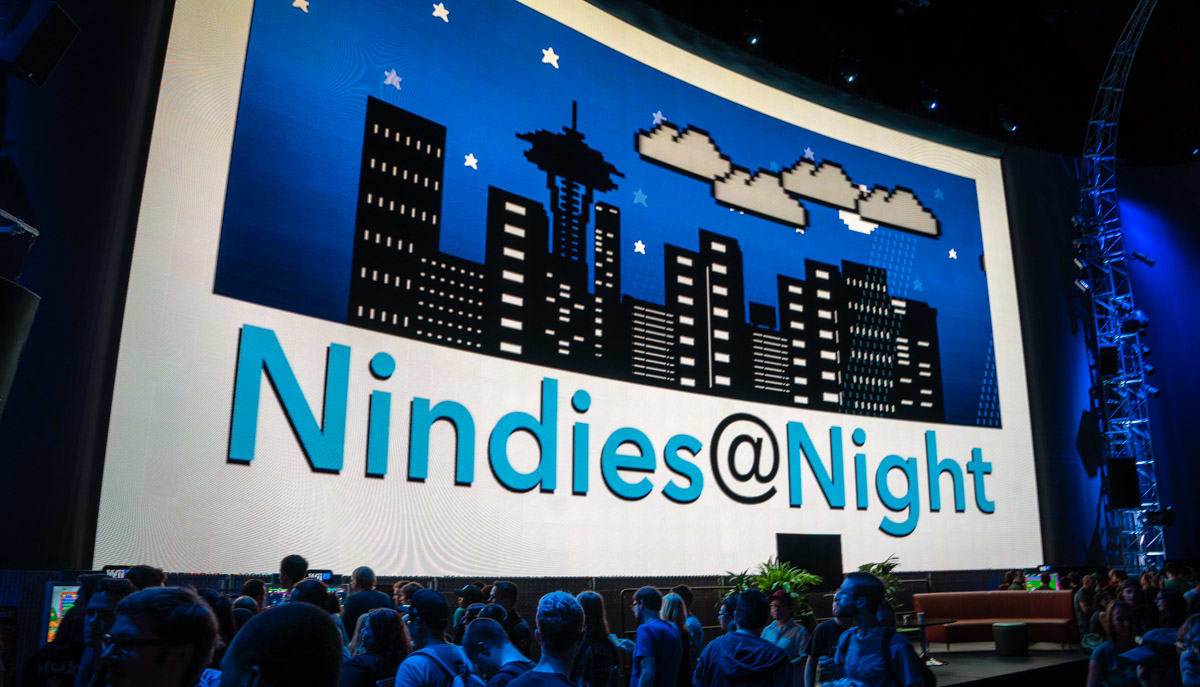 Nintendo helped kick off Seattle's annual PAX Prime gaming convention with a focus on the indie scene. The Nindies@Night event at the EMP Museum gave fans a chance to check out 19 indie games on the Wii U and 3DS -- and interact with the developers themselves. Among the highlights: Developer Shin'en showed off two-player split-screen support in its very F-Zero-esque Fast Racing Neo; Squad talked about bringing Wii U-specific features to Kerbal Space Program; and Yacht Club Games unveiled a certain shovel-wielding Amiibo figure. 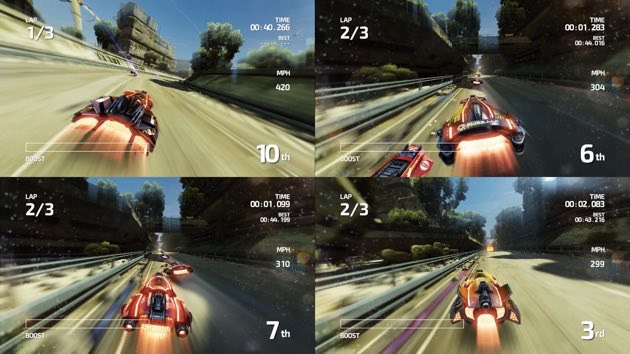 While a number of Nintendo franchises have made an appearance on its current-gen system, there's still no sign of an F-Zero entry on the horizon. Those longing for a sci-fi racing fix might get just what they need in Shin'en's upcoming Wii U exclusive: Fast Racing Neo. A follow-up to the dev's 2011 WiiWare title, Fast Racing Neo aims to provide the kind of futuristic, sci-fi antics that fans of F-Zero and Wipeout can appreciate.

Players can race their rocket sleds in a variety of sci-fi settings -- from futuristic cityscapes to space stations. Shin'en Art Director Martin Sauter walked me through the game as we watched a pair of attendees try out the newly announced split-screen mode. "We really tried to make it like a Hollywood movie -- really exciting," he said just as a massive, robotic worm arced over the racetrack. The game will feature 16 tracks split into four cup events, and supports single-player, up to four-way splits-screen and eight-player online.

A solid frame rate is a major component of any racing game and the developer is working hard to maintain 60 fps even during two-player split-screen -- while Sauter expects four-player mode to hit "30 for sure." The split-screen mode looked impressive in person and Sauter added that optimization is still ongoing. "At E3, I couldn't even say 60 frames," he said. 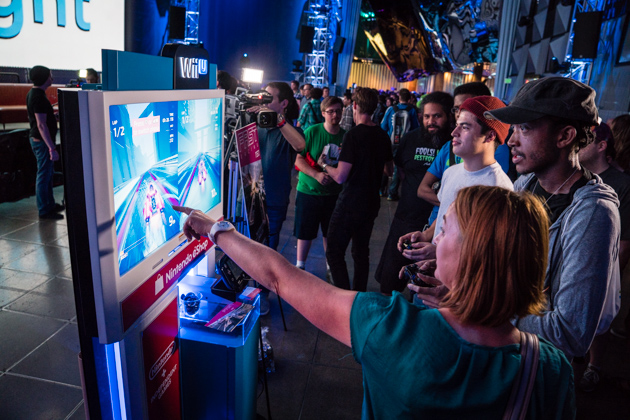 And while the Wii U might be capable of better graphics than some give it credit for, Sauter also touted his team's experience with its in-house engine. "The Wii U has some power. ... But you can't just plug in Unity [a cross-platform game engine] and have everything run great," he said. "We have our own engine and we've been developing it for 20 years."

Of course, being a sci-fi racer set in the future, even Fast Racing Neo's rocket sleds can't evade comparisons to genre classics like F-Zero and Wipeout. Sauter said the dev is, unsurprisingly, a big fan of those games and thought of those titles when considering what to bring to the Wii U's eShop. "We don't mind people seeing F-Zero," he added, "[but] we want it to stand on its own feet." Fast Racing Neo is expected to ship later this year.

Elsewhere on the show floor, developer Yacht Club Games showed off the Plague of Shadows DLC for its popular side-scroller, Shovel Knight. But some of the biggest applause came during the official unveiling of a Shovel Knight Amiibo figure. Several attendees queued up to get a good look at the blue-hued protagonist (housed safely in a display case). Yacht Club says the figure can be used to unlock cooperative multiplayer modes on the Wii U and other challenges and customization options on both the Wii U and 3DS. 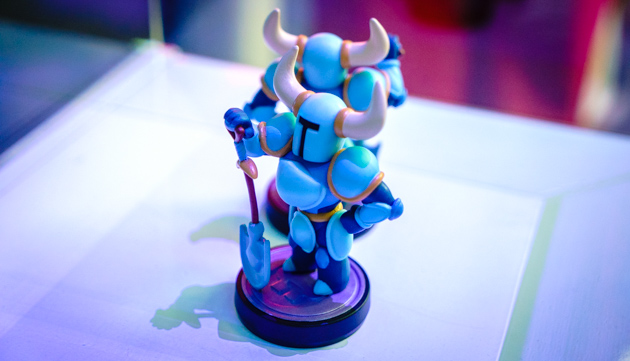 One of the most pleasant surprises was a game that wasn't even on the show floor: Kerbal Space Program. Console ports for the popular spaceflight simulator have already been announced for the PS4 and Xbox One, but developer Squad took to the stage during a Q&A session to announce a Wii U version would be on its way as well.

Producer Miguel Piña said the dev is currently working on some Wii U-specific features that take advantage of the console's unique GamePad, like mapping and planning on the controller's screen rather than constantly flipping back and forth between menus on the TV. One option could let players view the interiors of their spaceships on the GamePad's built-in screen – acting like a window of sorts as you move the controller around in all directions. Piña described using the GamePad to look at specific panels and reaching out to toggle controls. Controlling the ship this way opens up a whole new experience, he added, since players could look out through the windows of their ship and watch as the environment zooms by. Of course, the interior view could also ramp up the intensity whenever players make sudden, unexpected landings (read: crashes). The game doesn't get gory, Piña said, but you do get a nice explosion. "It's really fun [to control]," he said, "and also really scary when you crash."

While I couldn't pry a launch date out of him, Piña did say we can expect the Wii U version of Kerbal Space Program to lift off at the same time as the PS4 and Xbox One versions. 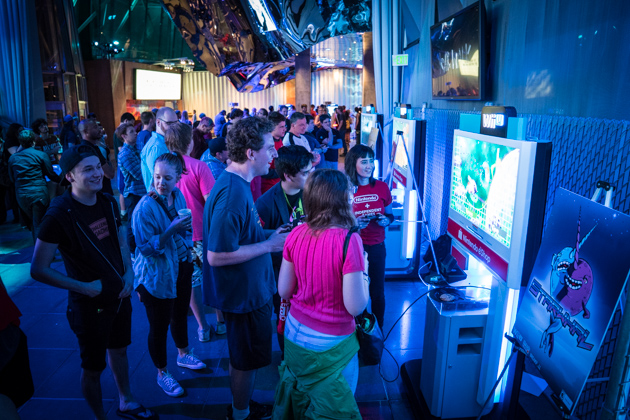 Overall, the devs and fans I spoke with at the event enjoyed the chance to interact directly with each other -- something indie developers don't always get a chance to do. When Squad started work on Kerbal Space Program in Mexico City, for example, Piña said the dev had no expectations when it came to widespread international success. "It's so weird for us [meeting fans from across the globe in person], but it's the best thing in the world," he said, adding that when Squad first released the game, "we said, 'Here's our game; does anyone care?'"

Judging from the hundreds of fans on the show floor checking out indie games and the variety and creativity these titles can exhibit, it turns out yes; gamers care.

In this article: 3DS, F-Zero, Fast Racing Neo, hdpostcross, Indie, indie-games, kerbal-space-program, nintendo, PAX, PAX-2015, pax-prime, shovel-knight, video, Wii U, Wipeout
All products recommended by Engadget are selected by our editorial team, independent of our parent company. Some of our stories include affiliate links. If you buy something through one of these links, we may earn an affiliate commission.