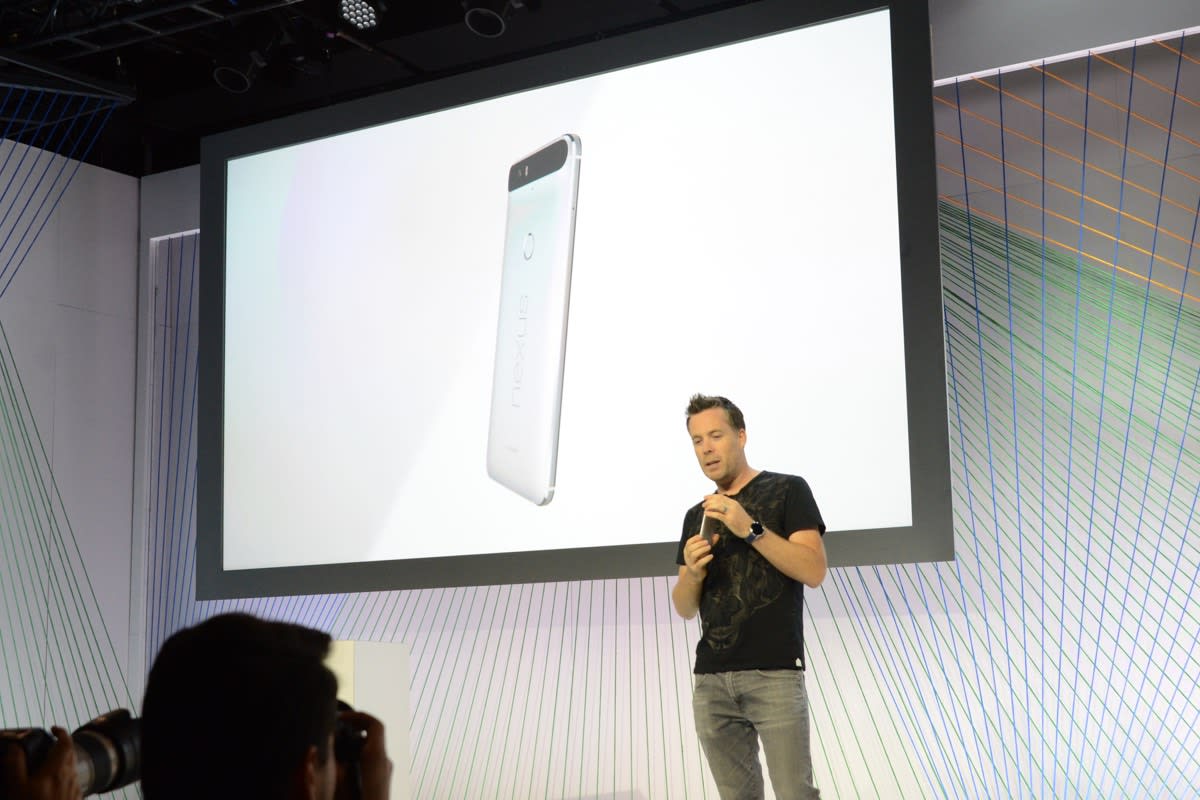 We knew with near-certainty that (one of) the next Nexus flagship phones would be a Huawei-built device called the 6P, and now Google has just made that official at its event in San Francisco this morning. Naturally, the new phone is running the latest version of Android: 6.0 Marshmallow. Surprisingly, the device is a little bit smaller than the Nexus 6 it's replacing -- the Nexus 6P has a 5.7-inch screen running at 1440p resolution. That works out to 518 pixels per inch, an absurdly high ratio that's becoming commonplace on plenty of flagship devices. Also of note is the device's high-end construction: Google says that the phone is made of "aeronautical-grade aluminum."

There's also a new fingerprint sensor called Nexus Imprint, and Google says it opens up fingerprint recognition to the "entire app ecosystem." Once trained, the sensor can recognize fingerprints in less than 600 milliseconds, and it learns more about your fingerprint over time to get more accurate. Naturally, this system also works with Android Pay.

Dig deeper and the spec sheet continues to impress. The Nexus 6P features a 12.3-megapixel back camera with an impressive f/2.0 aperture and what should be a pretty solid autofocus system -- Google says it uses IR lasers to assist with autofocus, a feature found on devices like LG's G4. It's far too soon to say for sure, but we might be looking at the first Nexus phone to have a really great camera on board. The front-facing camera has similarly impressive specs, with an 8-megapixel resolution and an f/2.4 aperture.

The camera also has significantly larger pixels than the original Nexus 6, which should allow for dramatically better low-light photography either indoors or outside once it gets dark. There's a new burst mode on board that captures photos at 30 frames per second. The camera can also shoot slow-motion video at 240 frames per second, and it can shoot 4K video. And if you want to get right into the camera, you can just double-click the unlock button. The samples Google showed off certainly are impressive, but we're going to have to put it through its paces in the real world before making any judgments.

The Nexus 6P is running off of the Snapdragon 810 v2.1 processor with 3GB of RAM, another impressive spec that's seemingly becoming commonplace on a host of Android phones. Google's offering healthy amounts of storage here too, with the phone available in 32GB, 64GB and 128GB configurations. And the phone is Google's first Nexus device to feature USB Type-C connectivity -- not a huge surprise after the new Chromebook Pixel put it front and center, but we're still excited to see it becoming more commonplace.

As for pricing and availability, Google says the Nexus 6P will be available in Google's online store as of today for pre-order in the US, UK, Ireland and Japan. More countries will be coming over the next few weeks. Outside the US, both the 6P and the smaller Nexus 5X will be sold through local retailers and carriers. The 6P will start at $499 for a 32GB model and will start shipping in October. Naturally, they're unlocked, available without contract, and should work on all US carriers as well as internationally; there's also Project Fi support on board. Google's also throwing in a 90-day free subscription to Google Play Music as well as a $50 Google Play credit with every purchase.

It's also trying to alleviate stress over breaking your phone, so there's a new Nexus Protect program that provides two years of coverage for both mechanical problems and accidental damage. You'll be able to get a replacement phone as quickly as the next business day, and you'll be able to file a claim 24 hours a day. Naturally, it's not free -- it'll cost you $89. Still, this sounds like a huge step forward for Google's Nexus support.

In this article: google, Huawei, nexus2015, nexus6p
All products recommended by Engadget are selected by our editorial team, independent of our parent company. Some of our stories include affiliate links. If you buy something through one of these links, we may earn an affiliate commission.