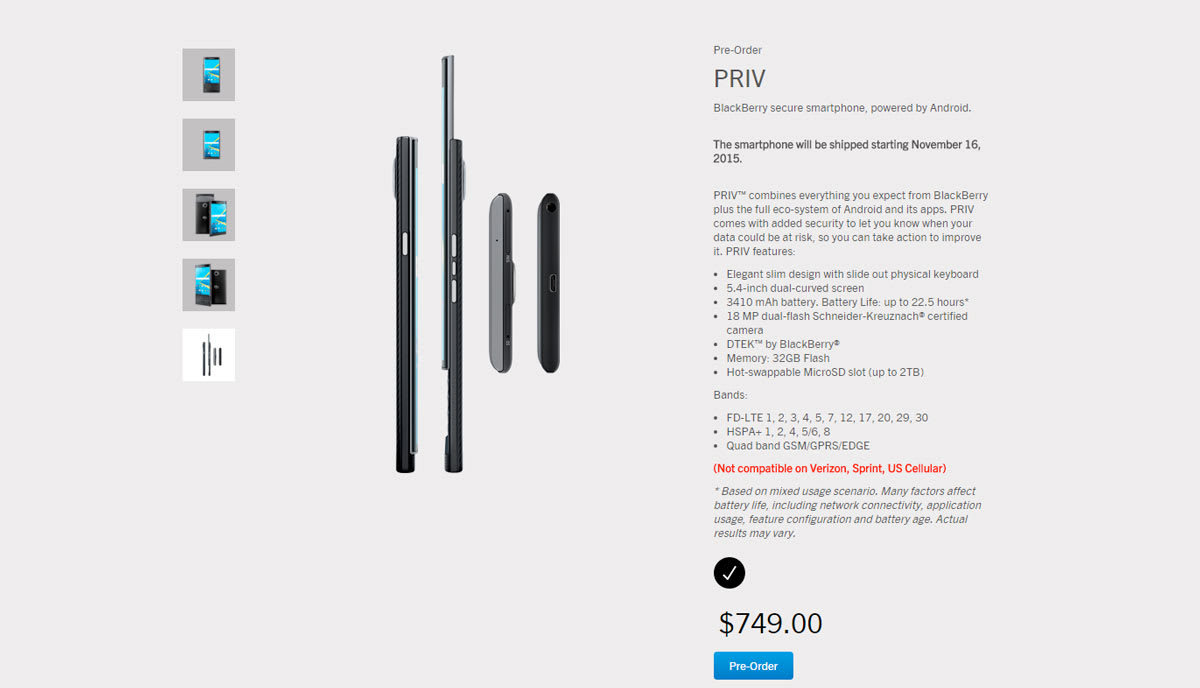 BlackBerry's been drip-feeding data about its first Android phone for the last few weeks, but it looks as if someone's spilled the rest of the beans a little bit early. An eagle-eyed member of the Crackberry forums found a page on the firm's website that shared the spec list and price for the US and Canadian version of the device. If accurate, then we know that the Priv is packing a fair bit of power beneath the hood, but has a listed price of $749. There's no indication if that figure is for the US or Canada -- but the page does reference the (GSM) handset not working on American CDMA networks like Verizon and Sprint. You'll also spot that the device is marked for release on November 16th, so we won't have long to find out if all of this is true or not.

Performance-wise, the Priv is packing a 1.8Ghz Qualcomm Snapdragon 808 with 3GB RAM, 32GB storage and a microSD card slot that'll take up to 2TB. Much was made of the Priv's curved screen, and we know that it's a 5.4-inch plastic AMOLED with a 2,560 x 1,440 resolution (540 DPI) that can handle styluses and gloves. The physical keyboard measures 37mm high by 77.2mm wide, and there's a 3,410mAh battery that's rated for 22.5 hours of use tucked inside.

We knew that the Priv would come with an 18-megapixel camera, but now believe that it'll come with OIS,a six-element f/2.2 lens and will record 4K video at 30 frames per second. The selfie cam up front is 2-megapixel with a f/2.8 lens and 720p video recording, and will also take panoramas with your mug in the middle of it. Plenty of BlackBerry devices come with NFC, but its inclusion here does raise the potential that the Priv could support Android Pay at some point.

All of this comes from a single source on a fan forum, so we can't take it as gospel truth, but even with a tinfoil hat, it all sounds plausible. We hope that the pricing is for Canada rather than the US, since that would make the cost here around $570, putting it in the same rough ballpark as the $599 charged for the Passport on launch.

Update: Another tipster spotted the phone up for pre-order on UK retailer Carphone Warehouse, the specs listed match what we have here, so it's confirmed. We also learn the (hefty) £580 SIM-free price tag.

Source: Carphone Warehouse
In this article: Android, BlackBerry, Leak, mobilepostcross, Priv, Rumor, SpecList
All products recommended by Engadget are selected by our editorial team, independent of our parent company. Some of our stories include affiliate links. If you buy something through one of these links, we may earn an affiliate commission.