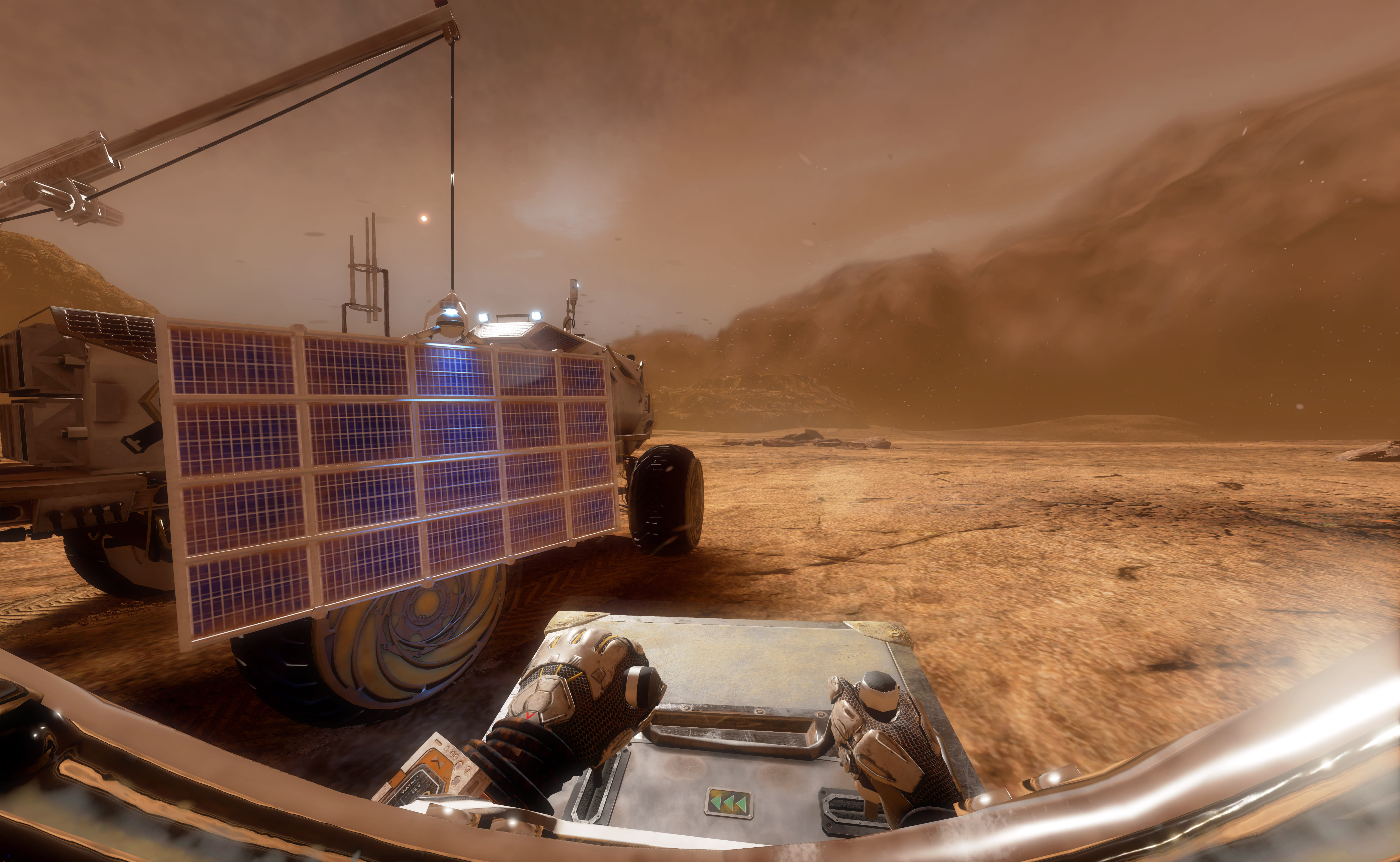 I wasn't prepared for The Martian VR Experience. All I'd known before sitting down in a padded seat in a near-pitch-black booth, tucked away in the Library bar at Vegas' Marquee nightclub, was that I'd be enveloped in virtual reality for up to 30 minutes. And I was worried about that. Bad virtual reality -- VR that lasted up to two minutes -- has sidelined me in the past, leaving a lingering nausea I'd prefer to never revisit. But by going all in with its first commercial experience, 20th Century Fox has made an expensive bet that pays off: It's created comfortable long-form VR.

"We want to make the experience really compelling, but also very enjoyable," says Ted Gagliano, 20th Century Fox's president of postproduction and one of the company's self-described "VR amigos." "And that means no nausea. Unfortunately, there will be lousy VR experiences out there and they will induce nausea. And hopefully, there will be some sort of standardization that curates that out, so the great experiences that show the potential of virtual reality rise to the surface."

Back in January 2015, when Fox was showcasing its first VR experiment at CES, The Wild Experience, a companion piece to the Reese Witherspoon film Wild, Gagliano had said the studio was focused on creating serialized VR, indicating that would be the business model going forward. With The Martian VR Experience, a spin-off of the Ridley Scott film starring Matt Damon as an astronaut stranded on the red planet, however, Fox pulled a 180.

"We ended up betting the farm on The Martian and we have no regrets," says Gagliano of the studio's decision to pause development on other in-process VR projects. Convinced this was the perfect vehicle to commercialize VR, Fox and director Robert Stromberg expanded the project into several interactive experiences that simulate the isolation of character Mark Watney as he navigates life on Mars. The result is a near 30-minute journey, stitched together with scenes from the film that, in combination with Oculus' Touch controllers, lets the viewer throw potatoes, navigate cold space, drive a rover, harvest plutonium and salvage solar panels.

Stromberg, the Oscar-winning production designer behind Avatar and more recently the helmer behind Disney's Maleficent, believes production on The Martian VR Experience naturally evolved to a length that suited the project. "We set out to do an 8 to 10 minute piece," he says. "And when we started getting into it. What we realized is that when you're actually in the experience you don't get a sense that you're in there that long. It goes by very fast. But in order to tell, even a condensed version of the story, we needed more time."

"We want to make the experience really compelling, but also very enjoyable. And that means no nausea."

Stromberg, who runs his own VR outfit called VRC, of which Steven Spielberg is a board member, says the impetus for the project came from his talks with Fox Innovation Lab's Ted Schilowitz, the man Gagliano describes as being "in charge of finding everything cool." The two men wanted to move beyond the "gimmicks and parlor tricks" they'd seen others create with VR and really "monetize the technology" the Hollywood way.

"Nobody's really told a story yet with emotion. And I think this is the first valid attempt at that," he says.

That sense of isolation is present during the 30-minute VR "ride," but what's more noticeable is how enjoyable and engrossing each segment is. And, according to Stromberg, that's the result of endless tinkering with the psychology of VR filmmaking. "It's not just being a director anymore, I think it's like really trying to really be accurate and psychologically correct with what you're trying to do." In particular, the rover simulation, arguably the high point of The Martian VR Experience, in which the viewer gets to drive around the Martian terrain, is where Stromberg's team spent most of its time trying to get things just right so as to avoid VR sickness.

"I had to make many, many changes to where the horizon was in that interactive sequence," he says. "Because if you're slightly off on the horizon, your body knows it. If you're going too fast in a certain direction, your body feels it. So we spent a lot of time with the proper speed limit and where the horizon should be. How much up and down movement the terrain has, itself. Those types of things. Moving backwards. ... It is all in our inner ear, in our equilibrium. And it's about if you see something happening, but your body doesn't know it's happening, that's what causes the disruption."

The end result is nothing less than a joyride on the surface of Mars that only left me with the barest hint of queasiness, a factor I chalked up to the extended time I spent driving around and the full speed I chose to do that at.

But nausea wasn't the only obstacle Stromberg and his team had to grapple with during the project's eight-month development. There were technical bugs to overcome, specifically those pertaining to any software updates for the Oculus Rift, HTC Vive and Sony PlayStation headsets -- the experience will be made available to all three platforms and Samsung's Gear VR mobile headset. The Oculus Touch controllers also proved to be a slight headache, as Stromberg says they were in a prototype stage and would continually break down. This meant his team had to work closely with Oculus to troubleshoot problems.

"It's a symbiotic relationship between content and technology," he says of working with Oculus. "You can't have one without the other. So we are going to help each other for sure because nobody wins if we don't work together." Since Fox intends for all of its future VR projects to be platform agnostic, the studio had to find a way to make porting its content less of a hassle. The solution? Stromberg's team devised a proprietary method of converting the game engine version of The Martian VR Experience, which runs on Unreal Engine, into a "a flattened version" that could easily be ported to any platform.

"Just look at any house with an Xbox or Wii. It's going to be that common. Every house will have a [VR] headset. Every house will give a person the option to sort of escape for a minute, or to play a game, or to look up what it's like to go to this hotel."

Though Gagliano says Fox is still committed to experimenting with creating and selling VR in serialized bits as well as long form, no actual pricing model has been determined. What Gagliano did reveal was that The Martian VR Experience was a costly endeavour for the studio and that if it could sell "300,000 units [or] 400,000 units, we'll get our money back at a certain price point."

Certainly the studio's looking to create VR spin-offs of upcoming tentpole features like Planet of the Apes and Independence Day -- Gagliano said as much -- but Stromberg's own future interests involve more than just VR storytelling and gaming. Instead, he hopes to apply VR to a more therapeutic end.

"Another thing that I'd love to do is to get involved with creating alternative ways to escape from painful situations [like with] burn victims or post-war trauma," he says. "Those types of things. End of life experiences. So rather than sitting in a bed, [you're] traveling the world. Those types of things interest me a lot." As for how the market will take shape in 2016 and beyond, Stromberg doesn't believe the masses will get their fix from arcades or theaters designed specifically for VR. He envisions a future where diving into VR is as commonplace as a Google search.

"Just look at any house with an Xbox or Wii. It's going to be that common," says Stromberg. "Every house will have a [VR] headset. Every house will give a person the option to sort of escape for a minute, or to play a game, or to look up what it's like to go to this hotel ... on vacation or whatever. As we all have laptop computers to find things, there will be a new way to tell for sure if you want to experience something. There'll be a new way to escape or entertain."

[Image credits: 20th Century Fox]
In this article: 20thCenturyFox, art, av, ces2016, culture, entertainment, gearvr, htcvive, mattdamon, oculus, playstationvr, psvr, robertstromberg, tedgagliano, themartian, themartianvrexperience, uk-feature, VirtualReality, vive, vr, vrc
All products recommended by Engadget are selected by our editorial team, independent of our parent company. Some of our stories include affiliate links. If you buy something through one of these links, we may earn an affiliate commission.