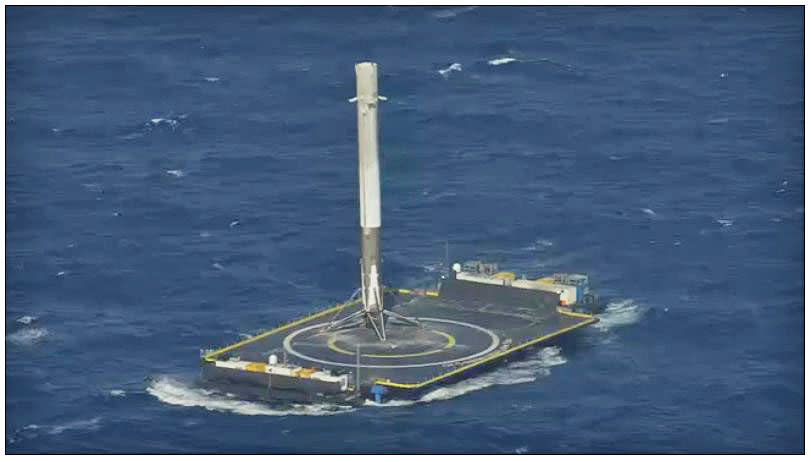 The folks at SpaceX have successfully demonstrated that their Falcon 9 rocket really is capable of blasting off to orbit and landing back down on a drone ship. It stuck a ground landing back in December 2015 after a handful of failed attempts to land at sea -- Falcon 9 reached the barge and nearly made it in all those previous instances, but something always went awry. This time, the rocket gracefully touched down on the ship named "Of Course I Still Love You" after ferrying a Dragon capsule with supplies for the ISS, thanks in part to its recent upgrades.

SpaceX updated Falcon 9's booster and tweaked its "legs," which are supposed to be able to support its weight when it lands. One of its previous attempts failed, because its legs didn't lock properly and gave out. According to VP for flight reliability, Hans Koenigsmann, that's pretty much all they changed: "There's minor changes on the nuts-and-bolts level, but that is basically all the changes that we did." Since its next step is to prove that the rocket that landed can be reused, SpaceX announced at a press con that it's launching the same Falcon 9 in May or June if tests ensure that it's still in perfect working condition.

Landing from the chase plane pic.twitter.com/2Q5qCaPq9P

Onboard view of landing in high winds pic.twitter.com/FedRzjYYyQ

The 1st stage of the Falcon 9 just landed on our Of Course I Still Love You droneship. Dragon in good orbit pic.twitter.com/SYyUCDZE3k

Congrats SpaceX on landing a rocket at sea. It's because of innovators like you & NASA that America continues to lead in space exploration.

In this article: barge, elonmusk, falcon9, ofcourseiloveyouso, rocket, science, space, spacex
All products recommended by Engadget are selected by our editorial team, independent of our parent company. Some of our stories include affiliate links. If you buy something through one of these links, we may earn an affiliate commission.