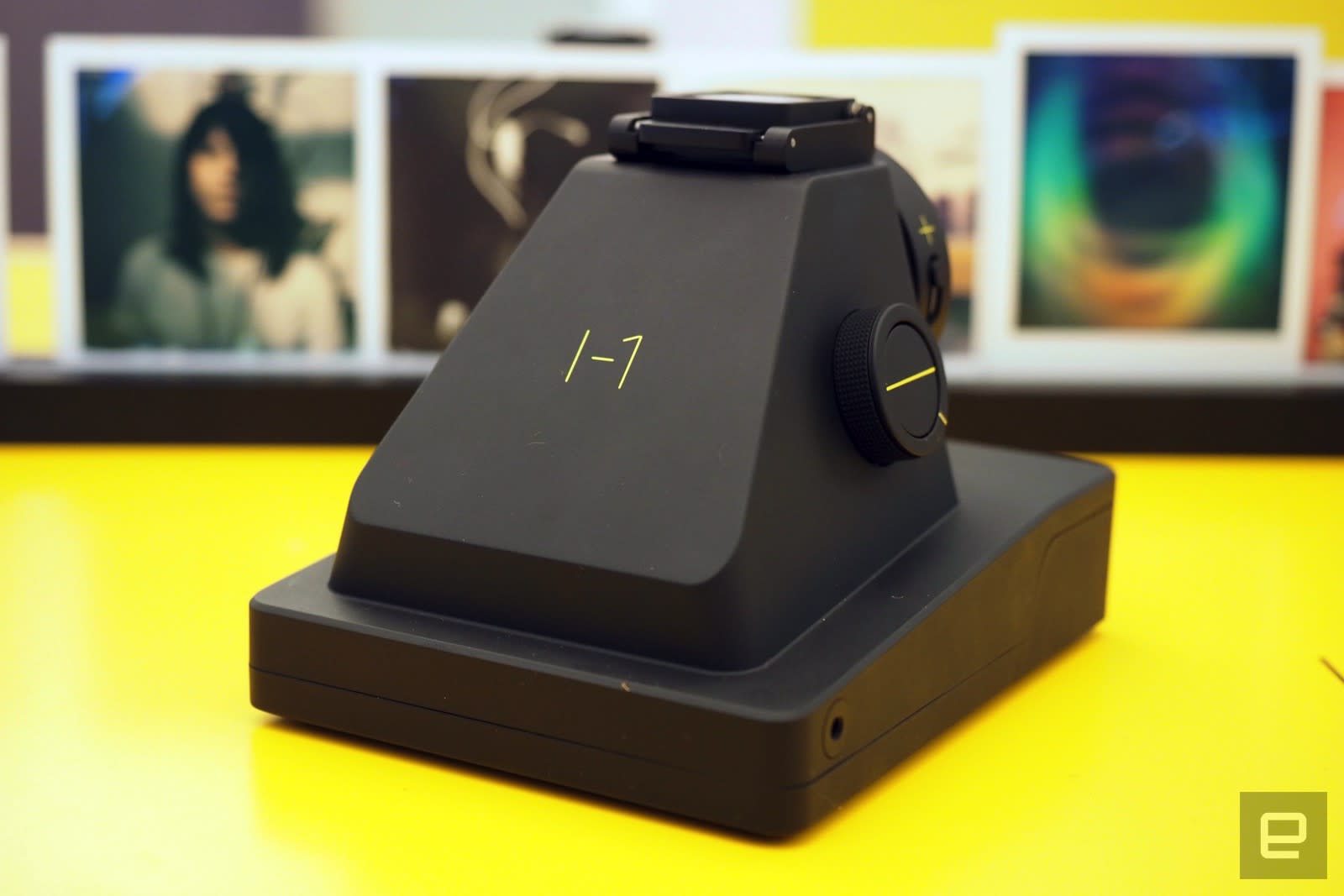 An instant camera with a modern take on retro photography

At a time when digital memories are a swipe away, instant film photography can feel tedious. But Impossible Project's I-1 camera makes the old school format feel new again. For its first instant camera, the German company that has been producing instant film for the past eight years repackaged the nostalgia of physical photographs in a contemporary box. The matte black exterior lends modernity to the camera that evokes memories of a Polaroid camera.

To zoom in on the shape of the camera, the design team, led by Impossible Project CEO Oskar Smolokowski, 26, followed the path of the light. So the anatomy of the machine follows the function. A sloping protrusion conceals a mirror that slants at a 45-degree angle. The shape makes room for light to travel and bounce off the mirror onto the film inside. The camera's flat base holds metal rollers that squeeze out chemicals inside the film and spread them evenly before spitting out the instant photograph through a slot in the front.

One of the most striking features of the camera is its big ring flash. Sitting bold and beautiful on the front, it helps make stunning portraits, but the ring also doubles as the user interface. From the second you press a flat round button on the side to turn on the camera, the LEDs in the ring light up to indicate the numbers of shots you have left; seven white lights and a single red one indicate a full pack of eight. A light goes out with every shot you take. The ring also switches modes to display battery levels with the same lights. You can charge the camera with a USB cable; a full charge lasts about 160 photos (or 20 packs of instant film).

What makes the I-1 feel current is that it pairs with an iOS app for digital controls. A simple twist of a disc on the side of the camera activates its Bluetooth capabilities. A blue LED indicates the pairing. Seconds later, an experienced photographer can change the aperture and focus in the manual mode in the app, or an amateur can mess around with the remote trigger, noise trigger, self-timer or use the double exposure mode that overlays two images on a single film. Compared to a smartphone, the camera looks boxy. But at slightly less than 1 pound, it feels incredibly light for a machine that instantly spits out memories in a physical format. The I-1 retains the function of an instant camera but it's been stripped of the bulk and the tubular viewfinder that sat atop traditional devices. Instead, there's a small mechanical viewfinder on top that snaps on and off magnetically.

I caught up with CEO Smolokowski in New York to learn more about the company that continues to power the instant film format and the design choices that led to the I-1.

Impossible Project bought Polaroid's last instant filmmaking factory in Holland in 2008. What led to the decision to buy the facility?

Polaroid had split. The factory was going to be scrapped. The brand got sold off separately and they were just licensing it to different products. We stepped in and bought the factory. It was the only way you could make this film. If they'd scrapped it all, you would have to invest so much money and re-engineer so much of it to bring those machines back up. We knew it would be dead if we didn't save it.

You've been making instant film and even refurbishing old Polaroid cameras ever since. What led to the launch of your own instant camera, the I-1?

We always knew we needed to make a new camera for this format to give it a future. We didn't just want to make a Polaroid reissue but to create something new. We decided to use the technology that had changed around this but we had to try and strike that balance and not lose the magic of the analog. The beauty of this is that you have to make a decision before you press the trigger, then it's out of the camera and it's done, you can't delete it. You have that shot forever and we preserve that by not having a digital preview on here. But you have an app that goes with it so it gives you the control that you wouldn't have with an instant camera before.

The process of shooting with instant film has always been unpredictable. You don't know what you get until it's in your hand. So what does the app add to the art of this format?

It controls the camera and teaches you about it, so it makes it more accessible. We wanted to show people what they could do with analog photography, which is new for a lot of our customers even though it's the oldest stuff. It lets you experience it right from the phone. It feels more satisfying when you control something with an app but get something physical from it.

The camera has been in the making for the last two years. What accounted for that time?

It was quite hard to make. The LED flash is powerful. Each LED is like the one you have on your phone, so it's like times 12. The battery is quite small but it needs to push that power out. So that took a while to get right. So did the optical system. People aren't used to making things like this anymore, stuff with moving parts.

The spreading system is really complicated, too. It has to be superprecise. There's chemistry on the photos. After you take a photo, the rollers in the camera squeeze the photo through so it spreads the paste across and it's very hard to do with precision. It's like surgical precision.

Polaroid cameras were also precise but they made millions and millions of cameras. And we're just starting out so it's a different story. We don't have the same funds and scale and manufacturers lined up to do it.

How did you home in on the design with Jesper Kouthoofd of Teenage Engineering, the Swedish studio that you roped in to design the camera?

We knew early on that we couldn't make it fold, so we wanted it to be as small as possible. We were fighting over half a millimeter with the engineers. Because I have [a mechanical] engineering background, I'd go in and say, "No, you have the space, I know you have the space." Same thing with the autofocus system; I wanted as many zones as possible. The engineers were, like, "Three are fine." I'd be, like, '"You got space for four." Later, I saw there's space for a fifth one. So there's five now!

There's a lot of stuff I pushed hard on, and it's been a learning experience. You can push a certain amount but you kind of have to know when to back off, unless you're Apple and have $15 billion to develop something -- then you can probably push through anything. But you have to know where to stop and say, "OK, this is not going to be easy to make."

Did you make a conscious decision to break away from looking like a Polaroid camera?

Definitely. It's kind of a funny place to be. We can't say we're Polaroid. We don't feel like we're Polaroid and on the other side, we can't even do it because they'd sue us. But we had the thing that everybody would look at and say, "Oh, it's Polaroid." It was a big conscious decision that the camera has to be Impossible Project and not one that plays off and tries to look like Polaroid. The only reason it has the reminiscence is the function. You need the mirror here, [pointing to the slope on the camera], at 45 degrees for the light to bounce off onto the film. That's a necessity, but for everything else we've tried to be different. What kind of users did you have in mind for the camera? Who do you see buying it?

For me, it's anybody who wants to experience photography. If you look at the landscape, you have a great phone with a camera and for most people that's enough. But it's a gateway. If you get interested in it, you need to spend a lot of money to get a digital camera that's a lot better than [the phone] and you make a decision about whether you're going to take that seriously. At the end of the day it's a better digital photo but fundamentally it's not a different experience. But [the Impossible Project camera] is. You get this physical thing. You make fewer photos but it's a limitation that encourages you to care about each photo. In my opinion, the user is anybody who wants to take that next step into photography. There's also that nostalgic feeling, but it's not only that. This experience of photography beyond digital resonates with a lot of people.

The camera, which retails for $299 online, requires a film pack that costs $20. While the cost of photographs isn't unusual for many users who are already drawn to the aesthetics of Polaroids, what about a different kind of user who is used to free digital versions?

The funny thing is you don't take that many photos in this format. With a good SLR camera, you're talking about $1,000 and you're taking hundreds of pictures that are all free but you're not going to look at them. With this format, if someone shoots eight photos a month, that's a heavy user.

This idea of "making real photos" seems to be a part of the company's M.O., could you elaborate on that?

To be honest, it's meant for the physical thing rather than saying digital photos aren't real. We believe that it's not pointless to take physical photos in between all of that. They will have meaning and a place in your life. You end up running into these photographs on your table, on your fridge. Interesting thing is, Facebook is doing that with Moments -- "This happened a year ago." To me, that's like running into a photograph in your drawer and remembering that it happened a year ago. They're recreating that digitally but it works so well physically.

What would you want to add in the next iteration?

It'll probably be in the third camera, not the next, but I want to have an SLR and have it fold. But we need to make a lot of money to make that happen.