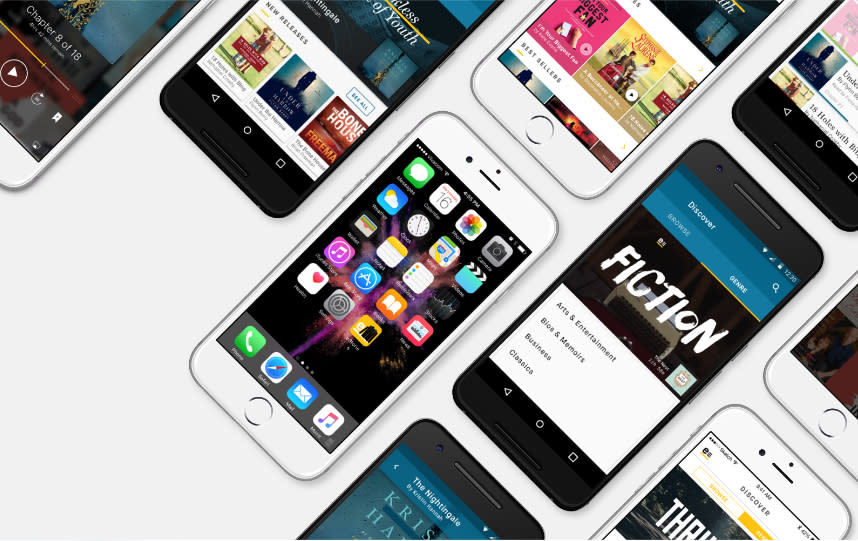 After ditching the major labels to go pure indie in 2014, digital music store eMusic and its new parent company TriPlay are now ready to take on Amazon and Audible's audiobook dominance. Today, TriPlay launched their eStories competitor with 80,000 titles and memberships starting at $11.95 per month.

Audible, which is owned by Amazon, boasts over three times as many titles – about 250,000 total according to TechCrunch – but eStories is hoping their slightly lower price will be enough to win over at least some of the audiobook market's estimated 55 million global users. For comparison, Audible's rates start at $14.95 per month for a single title with 30 percent discount on subsequent titles after that. After the monthly fee, eStories offers a 33 percent discount per book if you buy them a la carte. From there, prices go up to $21.99 or $49.99 per month for two or five monthly titles.

The new service isn't exactly following the eMusic indie-only format, however, and the company has partnered with the audiobooks divisions of major publishing houses like Hachette, Penguin Random House, Simon & Schuster and others to bring some major bestsellers like The Hunger Games and Game of Thrones series, The Girl on the Train and Between the World and Me.

Also per TechCrunch, eMusic's core service will be getting its own relaunch soon. After TriPlay acquired the company last year, the new owners shifted to a cloud streaming model rather than forcing users to go old school (circa 2007) and download purchased audio to their devices.

Update: An earlier version of this story erroneously cited Audible's user base as 55 million members. That figure is actually an estimate of the total audiobook market worldwide.

In this article: amazon, audible, audiobooks, emusic, estories, gear, internet, triplay
All products recommended by Engadget are selected by our editorial team, independent of our parent company. Some of our stories include affiliate links. If you buy something through one of these links, we may earn an affiliate commission.