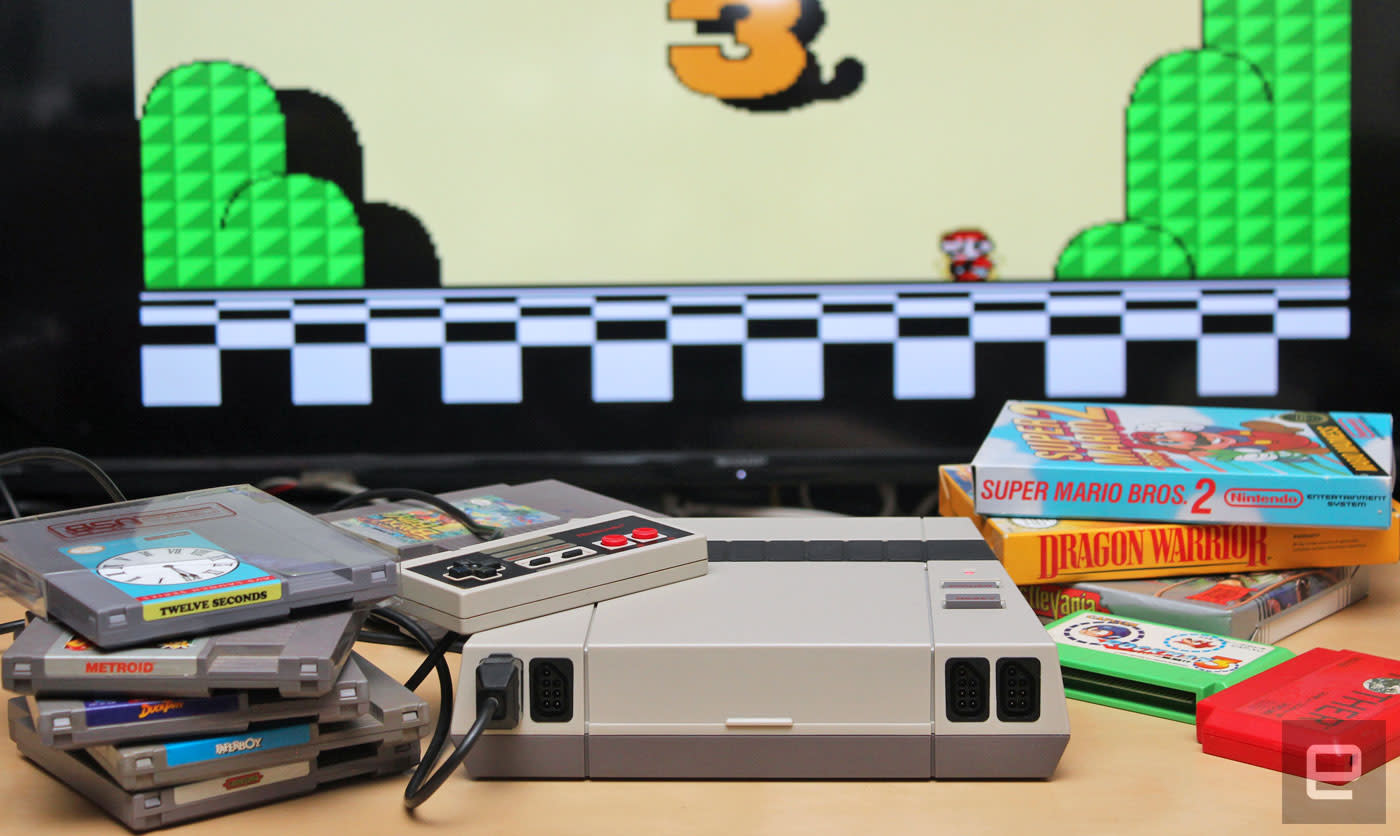 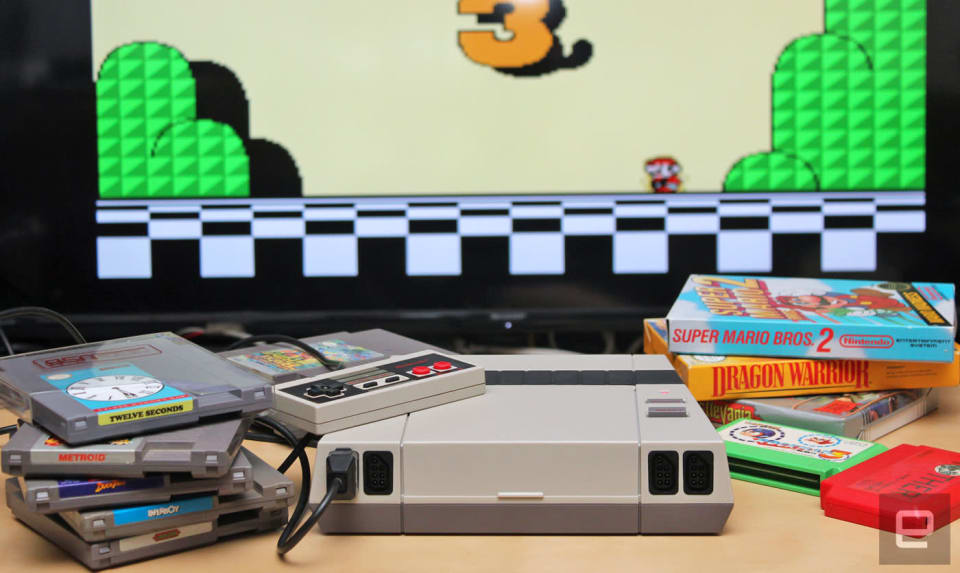 When I was a child, I fought with my brothers. A lot. It was part of being the youngest, and part of being a family. Most of our sibling rivalry died with our youth, but one single, never-ending quarrel outlived our childhood: the Nintendo Entertainment System. My oldest brother and I have been bickering over our original NES for decades. Who really owns it? Me, the guy who scoured garage sales to build our collection of classic games, or him, the firstborn who -- by sibling law -- is right by default? To this day, we still argue about whose house our childhood console should live in. Today, that war finally ends. I don't need our old Nintendo anymore. I have the RetroUSB AVS.

Think of the AVS as an unofficial hardware refresh for the original Nintendo Entertainment System. It plays the same games and even uses the original controllers, but everything else is brand-new. Instead of pushing a fuzzy, ugly picture through ancient composite cables, it pipes a crisp, high-definition signal over HDMI. In lieu of a cumbersome AC adapter, the AVS uses a humble USB cable -- and can be powered solely by the media port on your HDTV. And, unlike the RetroN 5 or Analogue NT, the AVS is all new hardware: a custom FPGA board programmed to replicate the NES' original processor. No emulators. No repurposed hardware.

OK, that might sound like splitting hairs. After all, don't all three of these consoles pipe HD NES games to modern televisions via HDMI? Well, yes -- but how they do it varies wildly. The RetroN 5, for instance, is actually a $160 Android device that runs cartridges through an emulator. It's also widely derided in the gaming community for allegedly stealing code. The Analogue NT is completely legit, and actually uses repurposed Famicom chips to run the games on a mix of old and new hardware -- but it's also a premium device, costing a steep $500. The AVS is something of a happy medium: It's not made from original parts, but it authentically replicates their functionality without legal ambiguity. At $185, the RetroUSB AVS is comparatively affordable too. The RetroUSB AVS' trapezoidal chassis is nothing short of a love letter to the NES' iconic design. Obviously, the monochromatic color scheme is a nod to the black and gray tones of the original's case, but it's the little things that make this homage truly delightful. This includes the shape of the lid that covers the console's cartridge slot, and "power" and "reset" buttons that look and feel identical to their 1980s inspiration -- but the most wonderful (and pointless) details can be seen only when you turn the console over.

Here you can see three trenches leading up to an empty recessed square that represents the original NES' unused expansion slot, vent placement that mirrors the layout of the original console, and foot pads that look identical to the rubber nubs on my childhood console. All of these design nods are completely unnecessary, and on a part of the device most users will never even bother to look at. Clearly, the designers love the original Nintendo. It shows. As much as I love how weirdly accurate the AVS' retro design is, it might be nostalgic to a fault. That cover over the console's cartridge slot does look exactly like the old NES chamber lid, but it's a lot longer too. It feels like a compromise, designed to ensure that users can more easily insert and remove games -- but opening and closing it feels awkward. I'm constantly worried it'll bend too far and snap off. With front-loading US region games, it at least feels secure when the lid is closed, but Japanese region Famicom titles use a separate top-loading cartridge slot that forces the door to stay open. It looks weird, and it makes me nervous.

Speaking of games, loading them can be a bit tricky. US titles slide in horizontally, just like on the original, but I never managed to seat a cartridge into the connector on the first try. Wiggling them back and forth a little usually did the job. The connector also holds on to games tightly -- removing them was just as much an exercise in wiggling as putting them in. It's not a deal-breaker, but I do wish changing games were a little easier. Finally, it's worth noting that the AVS features four controller ports and a Famicom expansion slot -- which enables compatibility for the rare four-player NES game (they do exist!) and for extra controllers compatible with the original Japanese Famicom. Playing NES games on the RetroUSB's console is like putting on prescription glasses for the first time: It brings a blurry, indistinguishable mess of light and color into focus. OK, the original NES isn't that bad, but the difference between composite cables and 720p over HDMI is startling. Did you know that Mega Man's sprite actually has white behind its eyes? I didn't. It always blended in with the character's pale skin tone. Backgrounds that were once a blurry haze of color now appear as distinct patterns; characters and stages are flush with "new" details and brighter colors. It's a surreal experience: I've been playing these games for 30 years, but now it seems like I've never really "seen" them before. I know what you're thinking: Can't I already play NES games in HD through the Nintendo Wii U's Virtual Console? You can, but they'll look worse. For some reason, the Wii U's VC implementation presents classic games in dull, muted colors with a side of blur. I tested Punch-Out!!!, Dr. Mario and a couple of Mega Man games side by side, and the Wii U versions looked worse by every measure. The games are no less fun on the official hardware, but they lack pop and polish compared with how my old cartridges look on the RetroUSB AVS. Here, the AVS does better than even Hyperkin's RetroN 5 -- which looks much sharper than the Virtual Console but tends to have overblown, inaccurate colors.

Best of all, every classic game I own ran perfectly on the AVS -- and that's not something I can say about every NES clone console I've come across. Most of these products use NES-on-a-chip solutions that either gets audio wrong or simply won't play certain games. Paperboy, for instance, isn't playable on either the Retro Duo or the FC Twin, and both consoles play off-key audio in specific games. Not so with the RetroUSB AVS: Everything I played looked and sounded exactly as it was supposed to. It even got the glitches right, faithfully reproducing minor visual hiccups in Mega Man 3 and Super Mario Bros. 3 that were present on the original hardware. Of all the devices that play NES games in my house, the RetroUSB AVS is the most accurate, hands down -- but that doesn't mean it's perfect. When compared directly with my childhood NES, it's clear that the AVS color palette is just a bit brighter. It's not overblown or washed out like the colors on the RetroN 5, but it does come across as a bit richer than the original hardware. I noticed it most in Castlevania and Mega Man 3. On the AVS, the bricks of Dracula's castle have more red in them, and Mega Man's helmet appears to be a darker shade of blue.

When I asked RetroUSB's Brian Parker about the difference, he chalked it up to differences in televisions. "NTSC," he joked. "Never The Same Color." I'm probably just seeing the difference between a clear digital signal and the fuzzy output of the old console's composite cables. Even if the colors are wrong, Parker says it's just part of the console's NES/RGB lookup table. "Easily changed with a firmware update," he says. The AVS also outputs only in 720p, but considering it still looks better than the RetroN 5 and Wii U at 1080p, it's a flaw I'm happy to overlook. If you're looking for a console to imbue your classic games with fancy graphics filters, instant-save-state features and other bells and whistles, look elsewhere: The AVS keeps things pretty simple. Beyond simply playing classic games in crisp, high definition, this console doesn't do much. In terms of visual options, the AVS allows users to switch between NTSC and PAL modes, adjust the screen margins (to hide overscan garbage in specific games) and adjust scanline darkness. The console's controller menu allows you to turn on some basic turbo features and see how many gamepads are connected, but that's about it. At the end of the day, there are only two special features that the AVS adds to the vanilla NES experience: built-in cheat codes and an integrated scoreboard. The first is self-explanatory: The AVS automatically recognizes the game in its slot and offers players a short list of the most popular Game Genie codes. The second takes a little more legwork; if the AVS is being powered by a PC or Mac's USB port, users can download companion software that will keep track of their in-game score while they play and allow them to upload it to an online leaderboard.

Unfortunately, the AVS itself doesn't make this process clear, presenting users with only a menu that fails to connect to an amorphous server. There are no setup instructions for the scoreboard in the console's menu or the manuals that came in the box, or even on the product's website -- I had to ask Parker via email. Still, it's a neat feature if you can get it up and running. Finally, RetroUSB offers one special feature that no competitor can boast: new NES games. The company has kind of made a name for itself in manufacturing new cartridges for homebrew developers, and it's neat to see that business cross over here to create a series of "launch titles" that work on both the AVS and the Nintendo's original hardware. I tried Twelve Seconds, a simple jumping game that challenges you to race to the top of the screen as fast as possible. None of the $45 launch titles seem particularly complex, but there's definitely a thrill to playing a new NES game after all these years. For me, the AVS is the ideal replacement for my original hardware -- it plays my cartridge collection perfectly, with better visuals than the original -- but it's not for everybody. Gamers who need modern conveniences like save states and graphic filters will probably rather have a RetroN 5. Folks seeking a nostalgic experience, but who don't already own a library of classic games will probably be happier with the 30 built-in games that come with Nintendo's NES Classic. Even hardcore collectors who demand that their games run on original hardware have other options in the expensive Analogue NT or a Hi-Def-NES mod.

If you have a classic game collection, however, and you don't care for the prestige of original hardware or the allure of added bells and whistles, check out the RetroUSB AVS. It's probably the best modernized NES experience you can get for under $200.

In this article: av, gaming, nintendo, Retron5, retrousb, retrousbavs, review, uk-reviews
All products recommended by Engadget are selected by our editorial team, independent of our parent company. Some of our stories include affiliate links. If you buy something through one of these links, we may earn an affiliate commission.