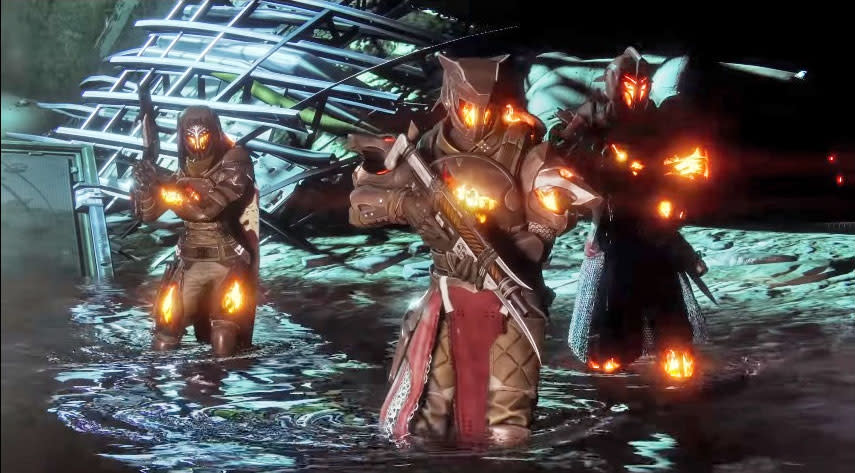 Days ago, Bungie released its third expansion, Rise of Iron, for its popular MMO shooter Destiny. A new short single-player campaign, multiplayer mode and six-person raid should keep players busy killing enemy aliens, and each other, for months. Undoubtedly, some of those gamers are parents, and while they pummel and gun down foes in-game, they might look wistfully at their kids sitting on the couch next to them. How can my progeny engage in this rich, bloody, grim universe with me, they'll ask? The answer, obviously, is a children's book.

The rhyming alphabet book, D is for Destiny, was envisioned to be the kind of bedtime story read to the game's last human children huddled in Earth's only remaining city. "A is for Adventure," parents will say. "B is for Be Brave," the City's rallying cry, an aspiration when the kids depicted on the page are an endangered species. "C is for Cabal," the alien goombas on Mars with those huge hitboxes that are joyfully easy to headshot. "G is for Grind. Forever." And so on.

Perhaps this is unjust. Popular science fiction has a delightful history in watering down vicious antagonists for a young audience, best seen in Darth Vader's transition from galactic butcher and child-killer to asthmatic mascot appearing on kids' backpacks and lunchboxes. Fittingly, the 40-page D is for Destiny was first made as a holiday gift in 2013 given to parents at Bungie, and the pages are well-illustrated. The book will be released on October 4th and retail for $15. In this article: av, Bungie, destiny, gaming, mmo, multiplayer
All products recommended by Engadget are selected by our editorial team, independent of our parent company. Some of our stories include affiliate links. If you buy something through one of these links, we may earn an affiliate commission.