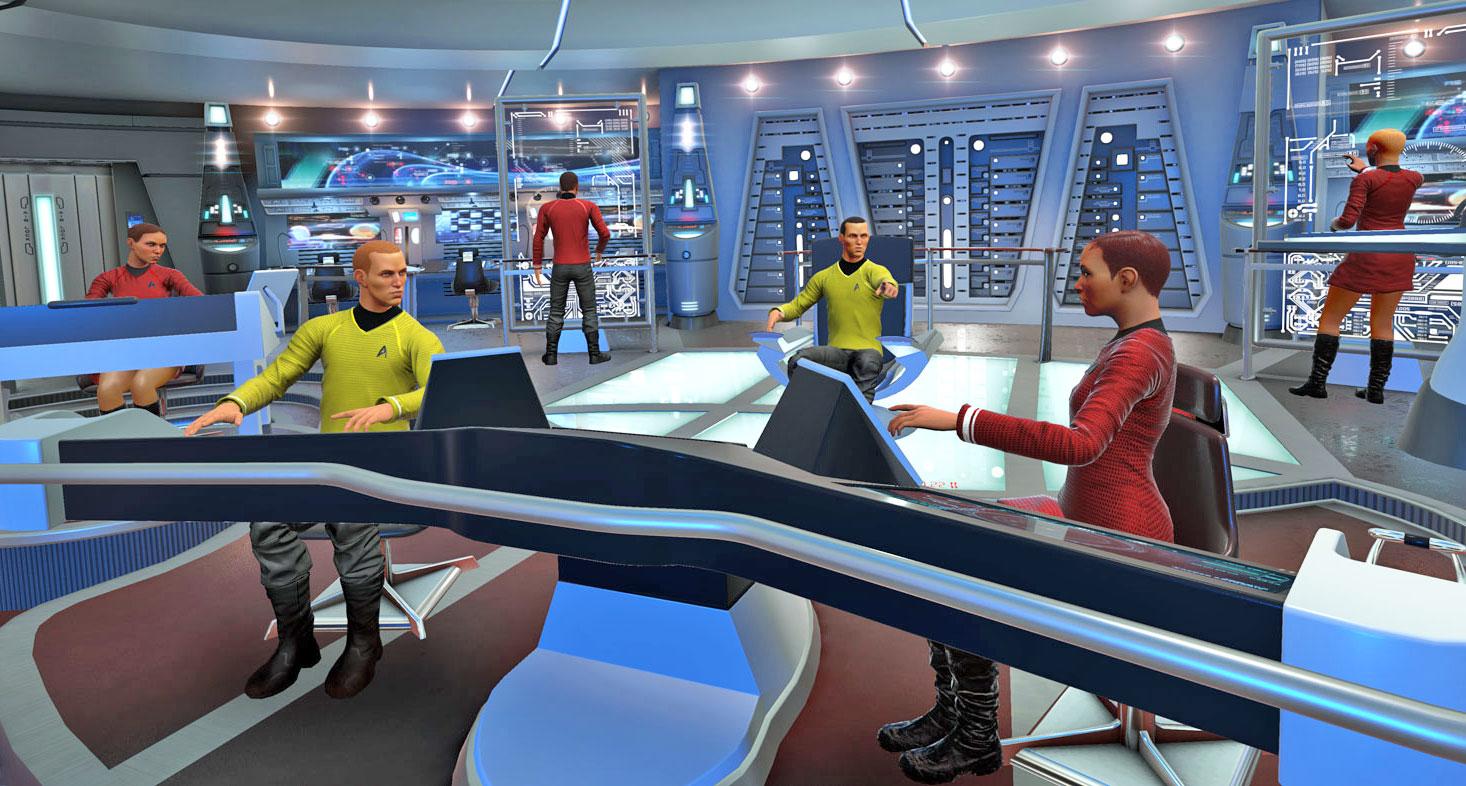 While you spent your childhood climbing trees, learning to love Mario and making furtive glances at your first crush, I was playing Star Trek games. That doesn't make me a gamer, but I'm well-qualified to talk about how poorly the series translates to any existing game genre. It's a generalization, sure, but most mainstream games are not about the slow, thoughtful collaboration necessary to solve problems. But that's why Star Trek: Bridge Crew is so intriguing: because VR offers us the chance to redefine those tired genres. In anticipation of the game's late-November mid-March launch, four Engadget editors tried out a near-finished demo with Ubisoft in London.

Bridge Crew tells the story of the USS Aegis NX-1787 and its staff, a Federation vessel designed for long-range surveillance of early-stage civilizations. The four players each man a station on the bridge, starting with the helmsperson, who is responsible for piloting the ship. Second, there's tactical, who's in charge of the ship's weapons, shields and scanners. A third plays is the engineer, who assigns the Aegis' limited power reserves between engines, shields and phasers while also manning the transporter. Rounding out the quartet is the captain, who is in possession of knowledge the other three need to do their jobs. Oh, and they also have the important job of pressing the all-important Red Alert button.

The story begins with a message from the local admiral, which allows the crew to settle into their positions. We're told that a nearby starbase has gone silent, and that the Aegis needs to go check out why. Naturally, we warp over to find assistance, only to find a wreck scattered beautifully in front of the neighboring star, which is about to go nova. We scan the area to find three escape vessels, beam aboard the survivors and warp away before the star explodes. So far, so Kobayashi Maru,* and true to form, once you've rescued the first six bodies, three Klingon vessels decloak and attack.

Sitting in the center seat was the culmination of a lifelong obsession with Star Trek that's seen me play a lot of tie-in games. As a dirt-poor kid from a rural town, the show offered me a vision for a better future: people -- smart people -- working together to solve problems and make the world a better place. Nobody beat up the smart kids for doing well in the 24th century, or for being bad at football, which made it a pretty nice place to live -- the sort that I'd have traveled to in an instant. Or, at least, I would have, except commanding a starship isn't as easy as you think.

You can't beam aboard survivors with your shields up, and dropping them in the face of three attacks would be suicide. So while it's presented as an ethical decision to fight or save lives, you're pretty much forced into going on the offensive. But there's a problem, because while Star Trek: Bridge Crew is a Kelvin-timeline** game, ship movement has been cribbed from the original. That means the USS Aegis maneuvers like an ocean liner compared to the fighter-jet-like Klingon craft. Going toe-to-toe with three far more powerful enemies turned out to be a disaster, and no matter how many times we played the demo, we couldn't win. (Although, in our defense, Ubisoft's representatives told us that the demo would break if we let the ship explode.)

Each player can only do his or her job properly with the support of the others, and the captain is key to guiding everyone. Only captains have a readout on the status of the enemy vessel when it cuts weapon power to recharge its shields. It's their job to use this information to guide the other three in coordinating attacks and when to run away to lick their own wounds. But that's easier said than done in a high-stakes space battle in which your helmsman needs more power for the engines and the tactical officer needs that same juice for the phasers.

Yes, we were playing a VR game in the back room of a central London art gallery, but that didn't make the pressure any less real. In fact, my palms were sweating against the smooth plastic of the Oculus Touch controllers and any water in my mouth had evaporated. I began to stammer and stumble as I tried to work out some -- any -- form of strategy to get us through this. I can feel my heartbeat in my ears grow progressively louder to the point where I can no longer hear my colleagues cry for assistance. No matter how many times we played the demo, we were unable to get beyond rescuing the first "gimme" survivors -- mostly because I couldn't coordinate everyone successfully. All those years immersed in the Star Trek canon had left me more John Harriman than Benjamin Sisko.

On one hand, Star Trek: Bridge Crew breaks new ground in delivering a Trek game that actually captures the spirit of the series. The graphics are slightly cartoonish, but that doesn't detract from the immersion you feel. It's nice to notice digital extras being thrown around the bridge when you take on damage, or the consoles sparking and smoking. After a particularly sturdy torpedo hit, a ceiling panel swings down and dangles above the viewscreen, something you'd expect to see in the show. Upon leaving the demo, I was flushed, excited and desperate to spend more time inside Bridge Crew to experience all that it could offer. But we'd overrun our time slot, because even a speedy run can quickly stretch to cover half an hour. But after a few days, the excitement wore off as I started to think about how the full-length game will play. After all, there's a big imbalance with player roles, because the majority of the work is done by the helm and tactical players. Ubisoft has kept much of the game's details close to its chest, but apparently the game will work with AI players filling in for absent humans. That's good, because whoever's playing the engineer has the joyless task of pushing the Aegis' one spare power block between three graphs. It's less gameplay and more tedious "space admin." Engadget's Aaron Souppouris, who played the demo and is fan of collaborative gaming, described the experience as "Artemis-lite," a reference to the six-player game also inspired by the show.

Then there's the fact that the space combat isn't as exciting as Ubisoft probably imagined it would be. This is nerdy, but while the game is well-steeped in Trek lore, it cribbed its ship movement from the show's "Prime" timeline. Watch JJ Abrams' Star Trek movies to see the new USS Enterprise perform hairpin turns and zooming around at great speed.

It's hard to judge Star Trek: Bridge Crew based on this demo alone, because Ubisoft has been tremendously cagey about what the rest of the game will look like. If it's simply more of the same -- a fetch quest followed by some stilted space combat -- it's likely to wear out its welcome pretty quickly. I'm hoping the company has been holding back the bulk of the game's detail simply to avoid showing all the goods at once, and that the game does indeed have a broader scope. Otherwise, it might be hard for me to assemble groups of friends to help me complete it.

* A famous piece of Star Trek lore in which cadets are tasked with rescuing a crashed freighter against overwhelming opposition. It's impossible to win, mostly because it's designed to teach you about no-win scenarios.

In this article: av, BridgeCrew, gaming, StarTrek, StarTrekBridgeCrew, Ubisoft, video
All products recommended by Engadget are selected by our editorial team, independent of our parent company. Some of our stories include affiliate links. If you buy something through one of these links, we may earn an affiliate commission.