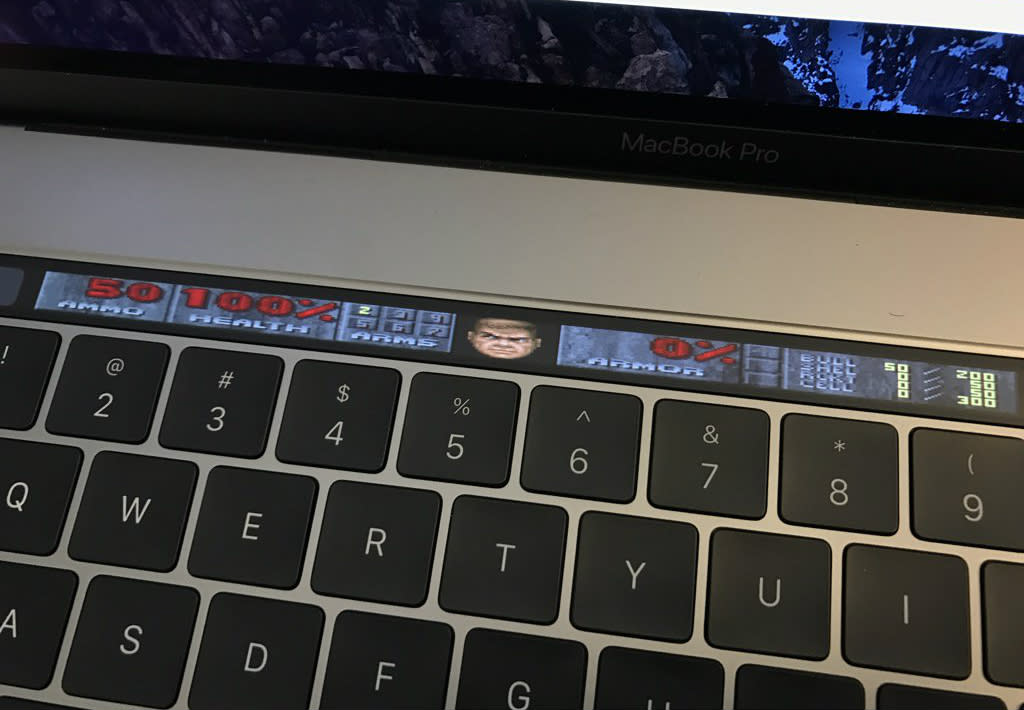 Doom is the rice of the video game world. It's a staple of the industry and it works with everything, running flawlessly on ATMs, printers, pianos, calculators, e-readers, chainsaws and even on a terminal within Doom itself. This week, Facebook iOS engineer Adam Bell got Doom running on one more unlikely appliance: the Touch Bar of the latest MacBook Pro.

Playing the original Doom on a MacBook Pro isn't impressive in and of itself, but squeezing those monstrous pixels onto the 2170 x 60 resolution Touch Bar is a notable accomplishment (even if the bar is basically a thin, elongated Apple Watch). Bell showed off his handiwork in a YouTube video published on Sunday, complete with classic sound effects, music and all.

Bell also configured the Touch Bar to display the Doom HUD, featuring health, ammo, weapons and other in-game stats at the top of the MacBook Pro keyboard, ostensibly while the game itself runs on the main screen.

Side note, as ridiculous (ly amazing) as Doom is running on the Touch Bar is... the HUD is equally great pic.twitter.com/RFwq7nJ7ae

Bethesda and developer id Software released a big Doom reboot this year and it's just as gloriously gory as the series' pixelated roots. It features multiple nods to the original game, including a level editor with classic assets. It's nominated in multiple Game Awards categories, including Game of the Year.
In this article: apple, av, bethesda, Doom, gaming, IdSoftware, MacbookPro, MBP, personal computing, personalcomputing, touchbar
All products recommended by Engadget are selected by our editorial team, independent of our parent company. Some of our stories include affiliate links. If you buy something through one of these links, we may earn an affiliate commission.