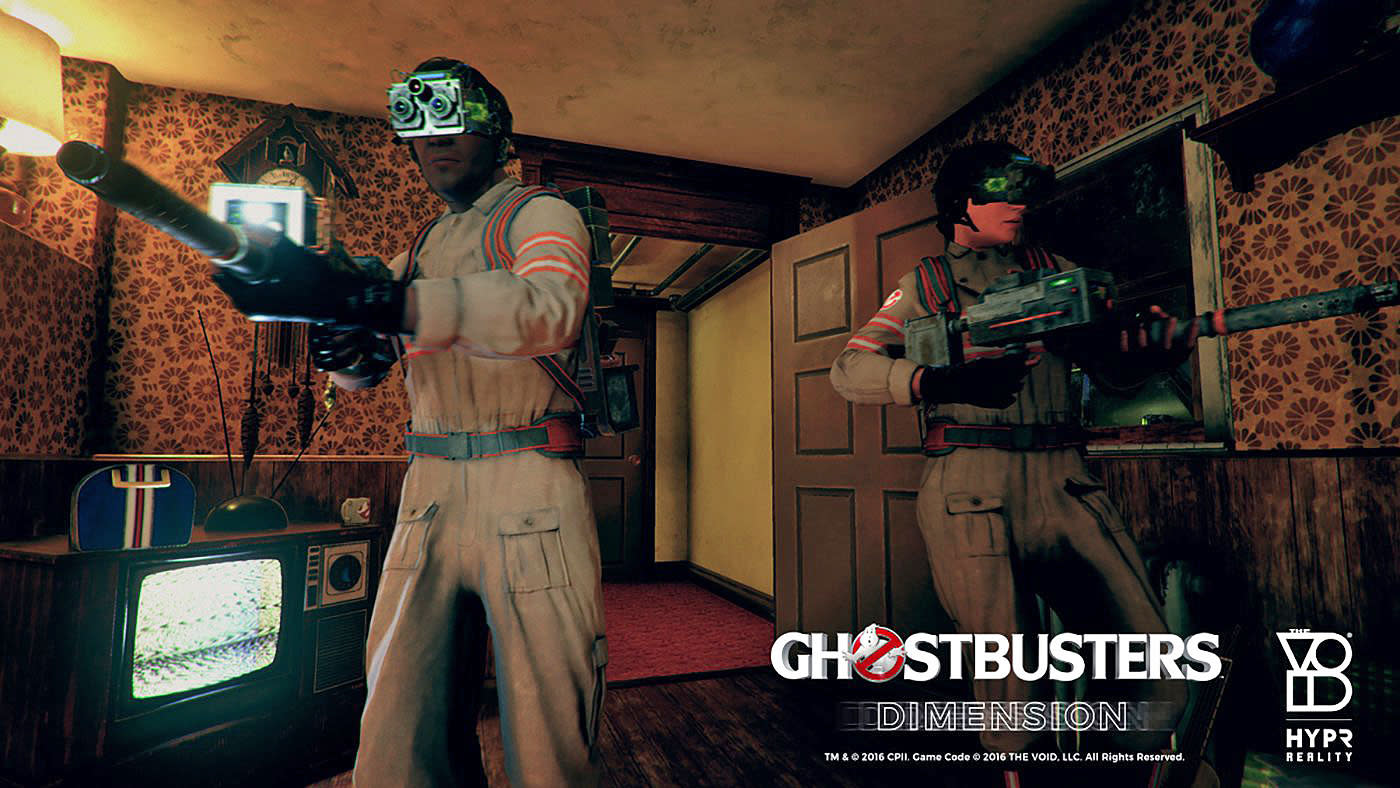 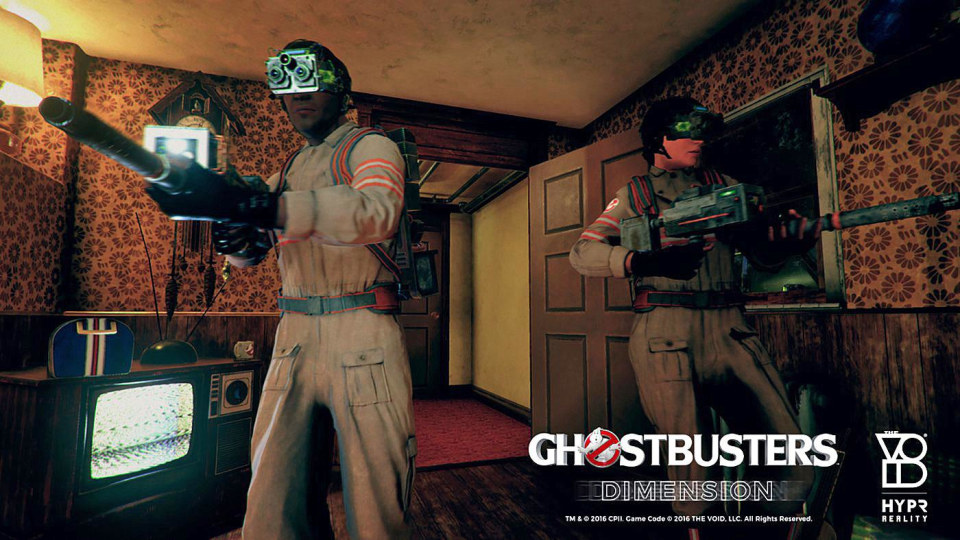 It was a struggle. My team and I spent several minutes fending off a malevolent spirit before finally subduing her, practically destroying a cramped apartment in the process. I was still reeling from being pelted with books and other loose objects when I began to survey the damage. Then, a scream. I turned around, knowing it could be only one thing: the Stay Puft Marshmallow Man, staring at us through a window. That was just one of many moments during the Ghostbusters: Dimension VR experience where I realized I was seeing something truly unique. Designed by The Void, a VR design company that's been pushing for more interactive virtual experiences, it's the marquee attraction at Madam Tussauds' new Ghostbusters exhibit in NYC. And really, it's the main reason to fight through the crowds at that tourist-clogged museum.

Before you even get to the VR area, you stroll through a typical Tussauds setup: A "subway station" with some freaked out attendants leads you through a haunted hallway, complete with "spooky" misty lighting. Eventually you reach Zhu's Chinese Restaurant, the headquarters for the new batch of Ghostbusters, where a smattering of props and life-sized wax replicas of the new cast greet you. And of course, you come across Slimer at one point. Honestly, I couldn't get past all that stuff fast enough. My expectations were pretty low by the time I reached the Ghostbusters: Dimension station, but I became a bit more hopeful once I saw all the gear we'd be putting on. That included an elaborate vest/backpack we had to strap on, a replica proton gun, and of course, a bulky VR headset. A "backtop" computer powered the vest -- it's a 3.5-pound rig with a desktop-class Core i7 processor and an undisclosed "next-generation" NVIDIA GPU. According to The Void's CEO Ken Bretschneider, it differs from the many VR backpack computers we're seeing because of its custom design (the company also trademarked the term "backtop"). The entire experience is also built on Unity's VR platform.

Once my team (which consisted of two other journalists) and I were all strapped in, I had my first revelatory experience of the day: we walked through a door in VR by actually walking through a door in real life. The sensation of reaching out and feeling a door virtually, and having it actually be there, was uncanny. With the Oculus Rift and HTC Vive, I've gotten used to teleporting around VR environments or using a traditional gamepad. Actually being able to walk through a VR environment, all the while seeing my teammates doing the same thing, makes the experience far more immersive. The Void calls this "hyper reality," which sounds just as buzzwordy as Microsoft's "mixed reality" concept. After seeing it in action though, hyper reality sounds about right. We got our bearings in a small apartment, where cute looking ghosts floated about (so cute that we felt bad about shooting them down). I noticed that I could see everything my teammates were doing very clearly, and we could also hear each other thanks to microphones in the headset. Rather than being isolating like so many VR implementations, Dimension feels collaborative. When a grumpy ghost stepped out of the toilet (I think with a newspaper in hand), we were quick to work together to take him down. We also noticed that we could actually feel ghosts passing through us, thanks to localized haptic feedback on our vests.

Eventually a door opened and we were directed to take an elevator to a new floor. My team hesitated before stepping on the lift, likely traumatized by countless haunted houses over the years. Once we stepped on, we felt the elevator rumbling beneath us. At one point Slimer appeared and flew right through us. We also caught a glimpse of the woman in white, who we'd be taking down later. Even though we were likely just on a static, rumbling platform, it felt as if we were actually moving on an elevator. (We couldn't take the headsets off during the experience.)

We made our way through a walkway, which led to an open catwalk high above New York City. We could see some sort of interdimensional portal streaming out of the Empire State Building (expect that to be a plot point in the new movie), and we could even make out cars and people moving on the ground dozens of stories beneath us. And then, the gargoyles appeared. It was our largest battle yet, but my team and I had no trouble dispatching them. We made our way along the catwalk, holding the side rails for guidance (which I felt IRL), and eventually found ourselves in another small apartment.

It wasn't too long before the woman in white appeared. We spent several minutes trying to control her with our proton guns, all the while avoiding smaller ghosts wreaking havoc. Eventually, someone laid out the trap and we dragged her over it together. That's when the Stay Puft Marshmallow Man decided to visit, ripping off the roof in the process. That's a moment I remember distinctly, as I was looking in the other direction when he appeared. It wasn't until I turned around that I saw what my teammates were screaming about. And I'll admit, I was caught off guard by having a giant marshmallow sneak up on me. That's a sign of truly immersive VR.

Of course, our victory was set in stone, but it still felt good taking down Stay Puft as a team. Naturally, we had to cross our proton gun streams to roast him, something I'm sure many Ghostbusters fans have been dreaming of for decades. By the end, my team and I felt like experienced ghost hunters.

As I began the slow process of dismantling the VR equipment, I couldn't help but wonder how The Void put all of this together. Consumer VR, at best, is currently restricted to a single room. But Ghostbusters: Dimension had me moving through several rooms physically, all the while synced up with people running their own computers. As The Void's Bretschneider describes it, a lot of custom work went into the experience. "We're using very very expensive systems the would be difficult to put into the home market because of the price point." he said. "It's almost like hybrid motion-capture systems."

The company is also developing an RF tracking system called Spire for future experiences, which will offer "full body tracking" with "full avatar representation inside the world." He also expects it to be accurate to under a millimeter, and it won't have the occlusion issues we've seen with current VR tracking. Dimension uses an early version of the Spire system for keeping track of multiple people throughout the VR world.

"What we really want you to do is step into a world, and forget about the equipment," Bretschneider said. "You're just in another world." As cool as it is, Ghostbusters: Dimension is a tough sell for most consumers. It's only 10 minutes long, but you'll have to shell out an additional $20 on top of the Madam Tussauds admission (which starts at $25) to experience it. But while it's certainly expensive, I have a feeling Ghostbusters fans won't mind it at all.

In this article: av, culture, entertainment, Ghostbusters, GhostbustersDimension, TheVoid, VR
All products recommended by Engadget are selected by our editorial team, independent of our parent company. Some of our stories include affiliate links. If you buy something through one of these links, we may earn an affiliate commission.