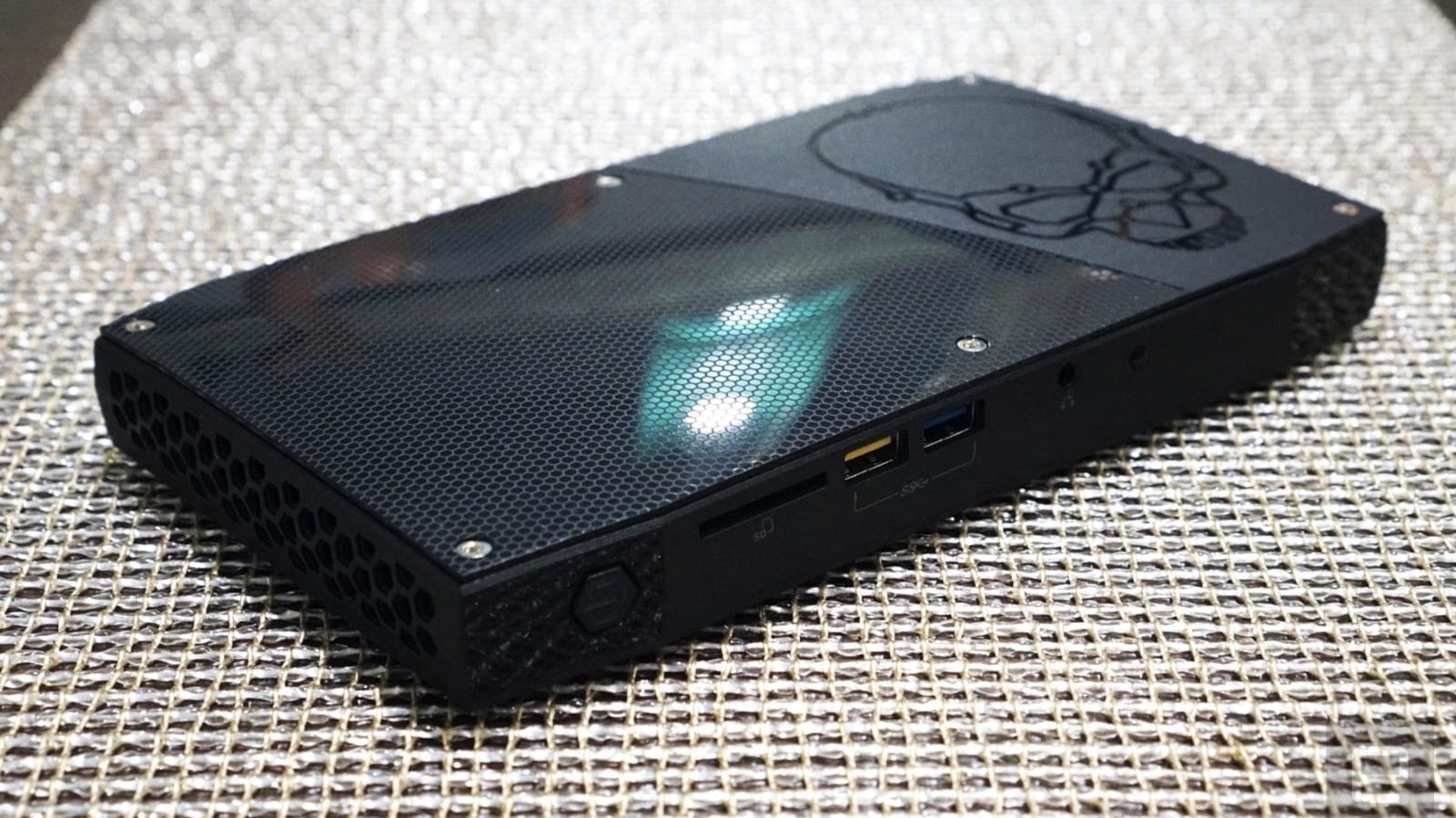 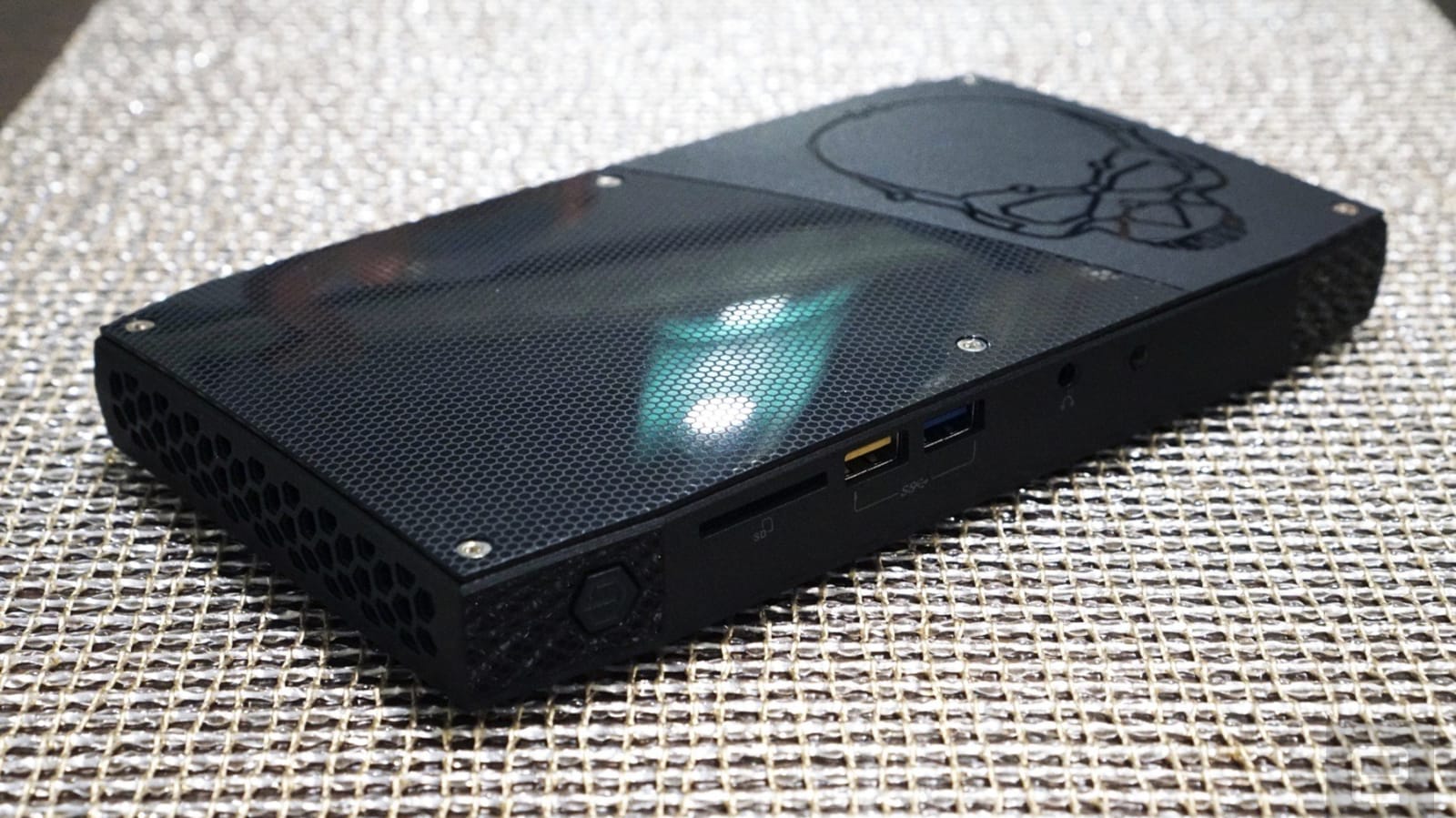 What if you could have a desktop that easily slips into a messenger bag or purse? That's what Intel has been aiming for with its Next Unit of Computing (NUC) devices. Yes, it's a terrible name, but Intel's goal is admirable: to deliver powerful machines that are significantly smaller than the desktops of yore. Our first look at a NUC back in 2013 showed plenty of promise. And with the new Skull Canyon edition (starting at $609), Intel has come closer than ever to delivering a truly portable desktop replacement that can even play some games. Just be prepared to pay through the nose to actually use it. Officially called the NUC NUC6i7KYK (yes, Intel is really bad at naming things), this new device isn't a complete computer. Instead, like all of Intel's previous tiny desktops, it's a kit that requires some handiwork. It packs in a 2.6GHz quad-core i7-6770HQ processor with integrated WiFi, Ethernet, Intel HD Audio and Iris Pro 580 graphics. But you'll have to open it up and add your own SSD in one of the two M.2 slots, along with your own RAM (it supports up to 32GB of laptop-sized DDR4 memory). And of course, you'll have to supply your own OS as well. In short, don't expect to buy this box and have it magically start working.

While previous NUCs looked like boring gray mini PCs, Intel actually infused a bit of style into the Skull Canyon model. It's a slim and small device, at only 1.1 inches tall, 8.3 inches long and 4.57 inches wide. It feels like a small hardcover book, weighing in at around 1.5 pounds. Its plastic case is all black, with a reflective webbing pattern and large skull imprinted on the top -- a not-so-subtle hint that Intel built this thing for PC gamers. Thankfully, the company also includes a plain black replacement cover in the box. Simply put, the Skull Canyon NUC feels like an exotic piece of hardware rather than a humdrum PC. 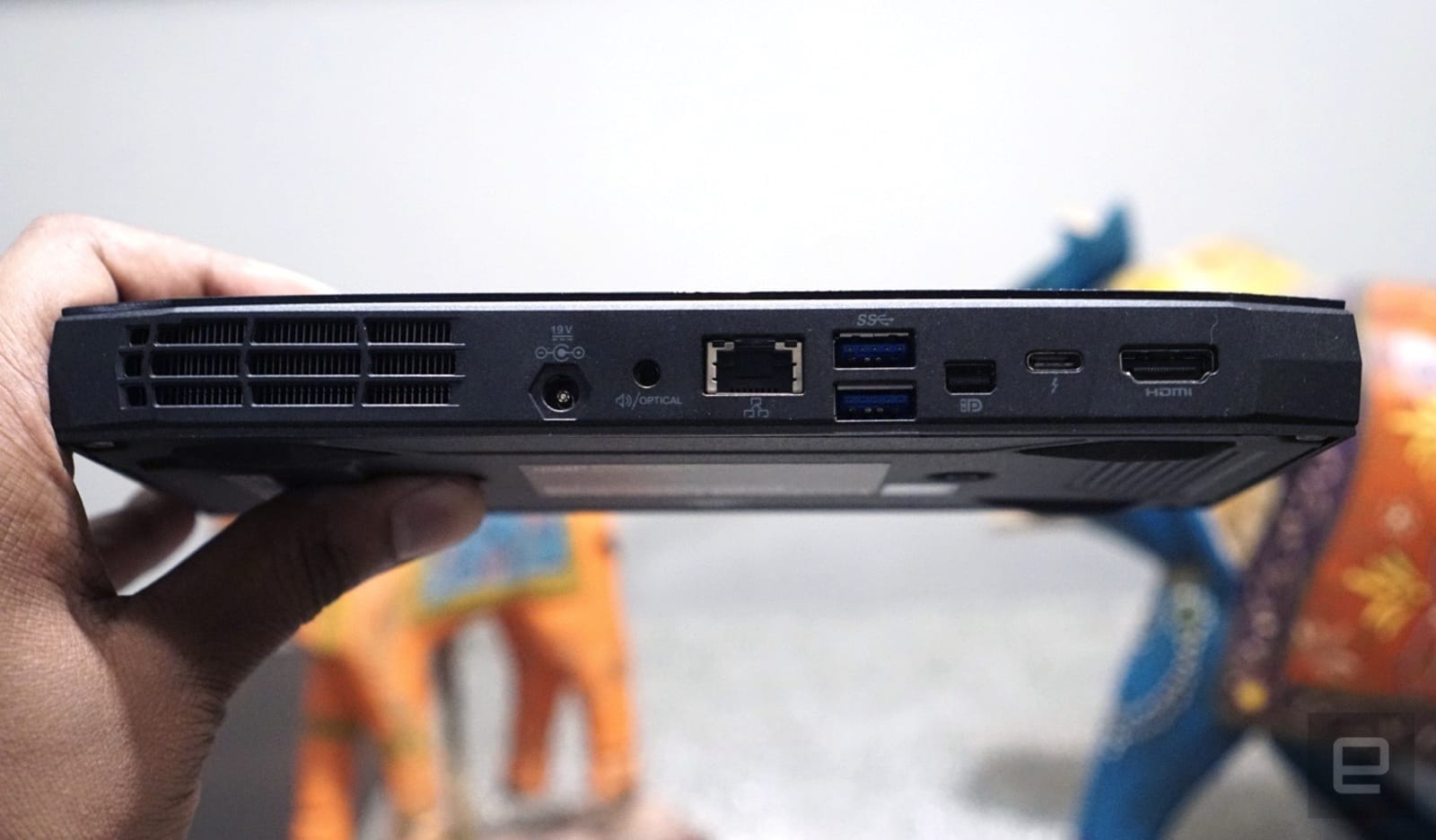 Alongside the power button up front, there's an SD card slot, headphone jack and two USB 3.0 sockets (one of which is colored yellow, as it's a "charging port" meant to provide extra voltage for mobile devices). Around back there are ports for power, HDMI, Thunderbolt 3/USB-C, Mini DisplayPort and gigabit Ethernet, along with two more USB 3.0 connections. In addition, there's another 3.5mm jack for audio output, which also supports minijack to optical cables (useful for connecting the NUC to an A/V receiver). This plethora of ports is another way that the Skull Canyon NUC distinguishes itself from modern laptops.

Getting started involves removing the four Philips screws on the bottom of the NUC and plugging in the RAM and M.2 SSD of your choice. Intel packed our demo model with a 512GB SSD and 16GB of memory, but I nonetheless unplugged and reinstalled those pieces of hardware to get a feel for what it's like to work with such a tiny case. If you've ever installed RAM, a video card or any PCI card in a desktop, you won't have any trouble here. But even if this is your first time dealing with naked hardware, it shouldn't be too difficult (just remember to align the pins). With my system complete, I then installed Windows 10 from a USB stick, a process that took around 15 minutes.

Once I got into Windows, I quickly realized that none of the drivers for the NUC were automatically recognized, not even its WiFi radio. I used my Windows desktop to snag those drivers, along with Intel's Display drivers for the NUC. Once those were installed, I had the NUC run through Windows Update several times to fully upgrade the OS and grab all the other relevant drivers. It took about an hour to get the NUC fully up and running. All the while, I had flashbacks to the hours I spent mindlessly installing Windows during my IT days.

With everything set up, I used the NUC for my daily workflow, which involves having dozens of browser tabs open across multiple browsers, chatting on Slack, writing on Evernote, listening to music on Spotify and occasionally editing some photos. For the most part, I was surprised by how normal everything felt. Even though it's running a laptop-grade i7 processor, which produces less heat than its beefy desktop counterparts, the NUC managed to keep up with me every step of the way. Having 16GB of RAM also helps, especially when it comes to multitasking and handling large files. You can definitely hear the system's fan working when things heat up, but that's to be expected with such a small device. 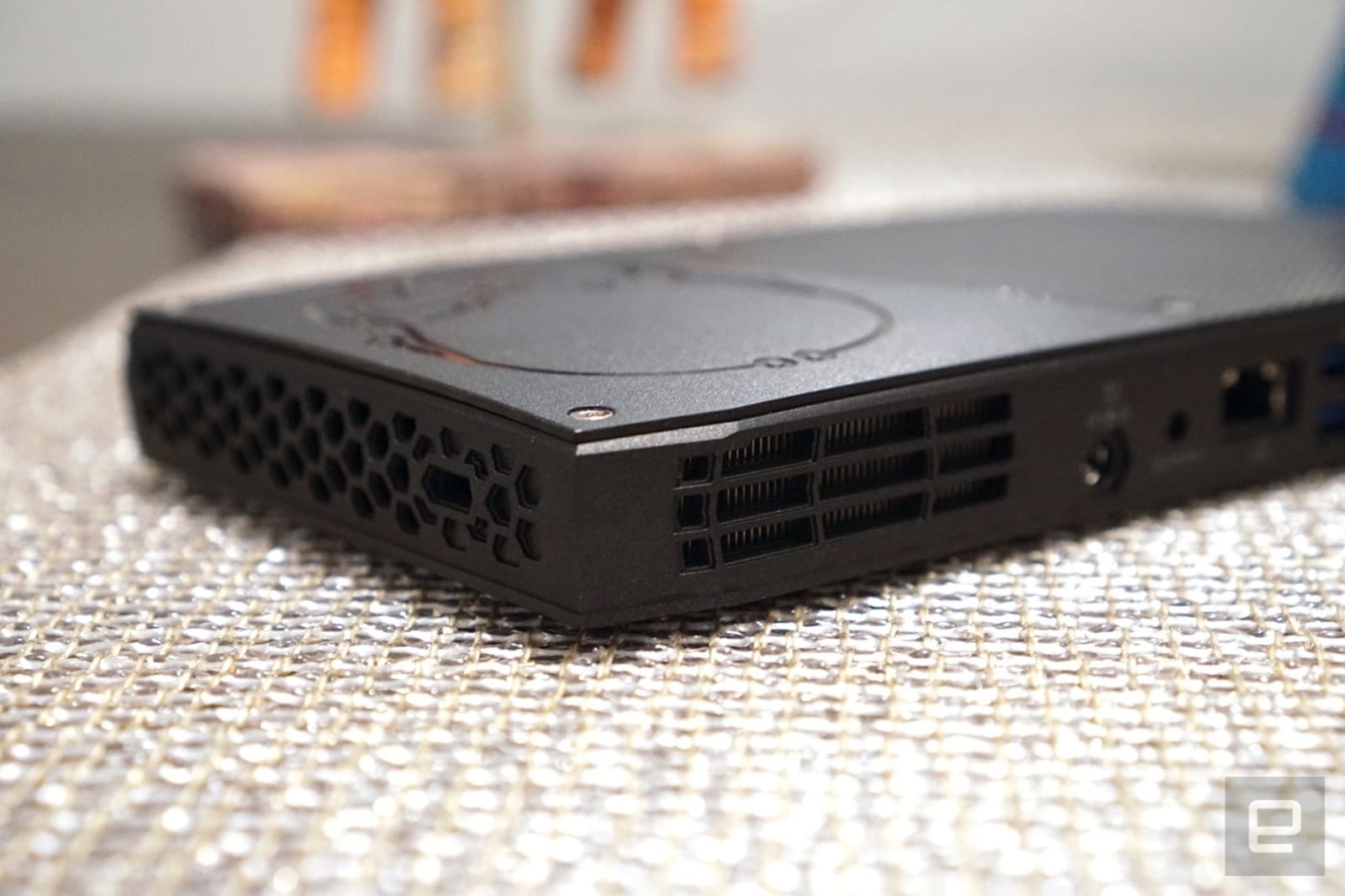 In practice the NUC felt almost indistinguishable from my custom-built desktop, which is particularly surprising given how small it is. This is also the first NUC with decent gaming performance: It had no problem staying at 60 frames per second in 1080p with less demanding games like Transistor and Civilization 5. Quadrilateral Cowboy, with its blocky '80s aesthetic, ran between 35 fps and 60 fps in 1080p. Even Overwatch was playable, reaching between 60 and 70 fps at 720p with low settings. More surprisingly, it ran at around 50 fps in 1080p with low settings. That's a testament both to Blizzard's scaling skills and the amount of power Intel has managed to cram into its Iris Pro 580 graphics.

For some gamers, the Skull Canyon NUC's performance will be fine for LAN parties and competitions. And if you need even more power, you can connect a full-sized graphics card over Thunderbolt 3 using an enclosure similar to the $500 Razer Core (Alienware's $200 Graphics Amplifier is similar, but only works with Dell's hardware). I didn't have one of those to test out, unfortunately, but it's nice to know the capability is there.

My experience with the NUC was reflected in its benchmarks. It's significantly faster than any laptop we've reviewed over the past year, especially when it comes to gaming performance. In fact, it even outdoes Microsoft's Surface Book and its dedicated NVIDIA GPU. We don't review many high-end gaming laptops these days, so we don't have any beefier mobile hardware to which we can compare the NUC, unfortunately. And while I've been testing a slew of desktop GPUs over the past few months, comparing the NUC to one of those feels unfair.

So Intel has built a mini computer that's both portable and capable, but who actually needs it? That's a good question. It's much easier to carry around than previous NUCs and other tiny desktop designs, like Gigabyte's BRIX. Intel is pitching it as something ideal for bringing to LAN parties and other gaming events. You'll still need to bring along a monitor, keyboard and mouse to actually use it, of course. If you're simply looking for something smaller than a typical desktop tower to use at home, there are plenty of small options out there that would likely cost less than the Skull Canyon NUC. And even if you're not worried about the cost, you can still cram more-powerful hardware in other mini-PC cases.

The big takeaway is that this isn't a device meant for everyone. Most people would be fine with a laptop instead (which is hard for me to admit as a desktop fan). While it makes for a powerful home theater PC that can actually play some games, you'd be better off with something like Alienware's Steam Machine. And if you're just concerned about the media side of HTPCs, earlier NUC models are cheaper alternatives (and only slightly larger). 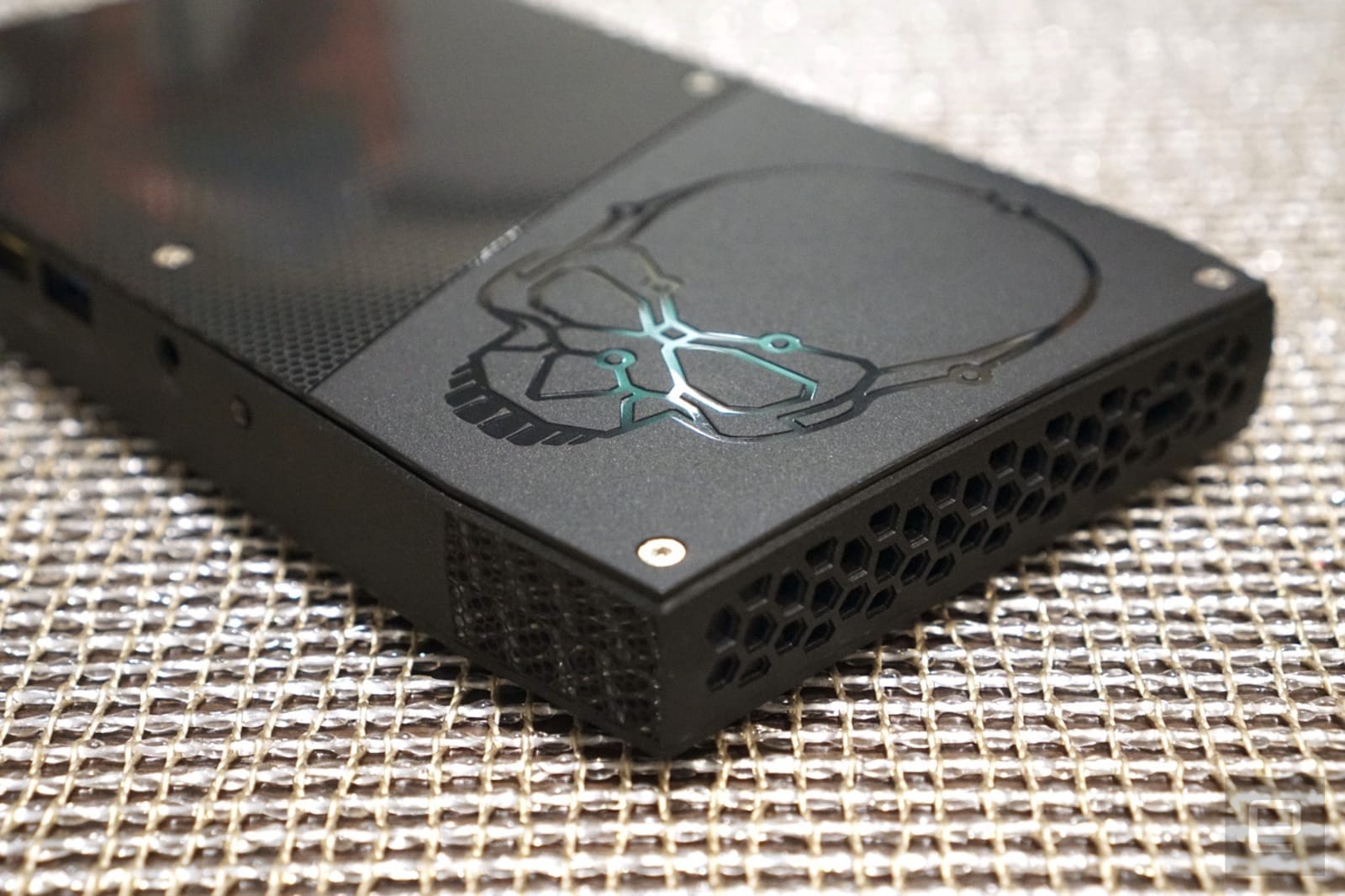 The biggest issue with the Skull Canyon NUC? It's too expensive for most uses. While it's retailing for $609 now (down from around $650 originally), it would likely set you back somewhere around $1,000 once you include the cost of a decent SSD, RAM and a Windows 10 license. It's faster than Apple's highest-end Mac Mini, which goes for $999 with a 2.8GHz dual-core i5 CPU, 8GB of RAM and 1TB of storage, but I'd argue that's also not the wisest purchase for most. If you want the best tiny desktop replacement, no matter the cost, then the new NUC is for you.

In the end, the Skull Canyon NUC is a statement of intent for PC hardware tinkerers. Behold! A small profile desktop coupled with a surprising amount of power. It might seem impractical today, but in a few years this is what desktops will look like.

In this article: culture, desktops, gadgetry, gadgets, gear, intel, minipcs, NUC, personal computing, personalcomputing, review, SkullCanyonNUC, uk-reviews
All products recommended by Engadget are selected by our editorial team, independent of our parent company. Some of our stories include affiliate links. If you buy something through one of these links, we may earn an affiliate commission.