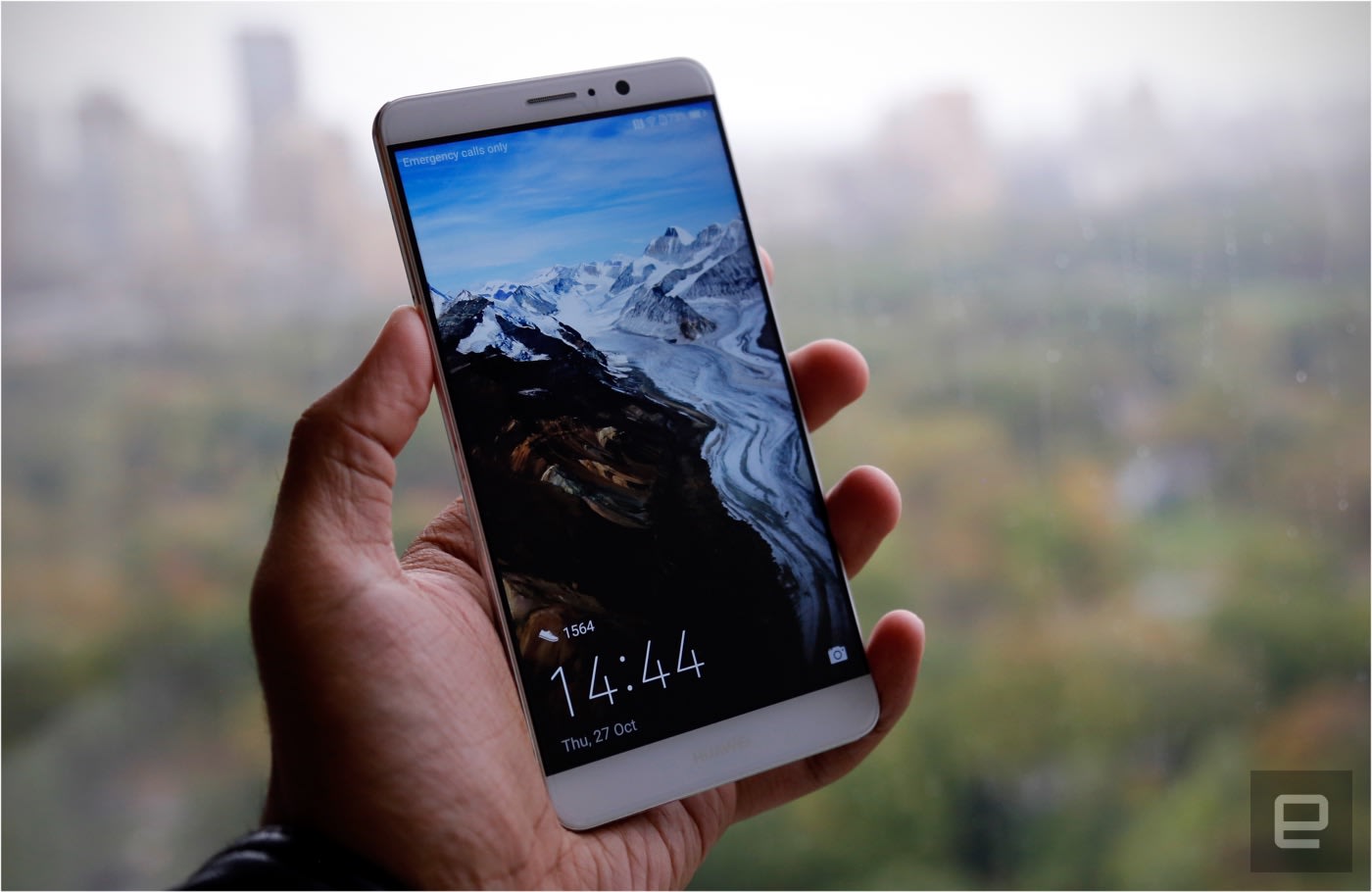 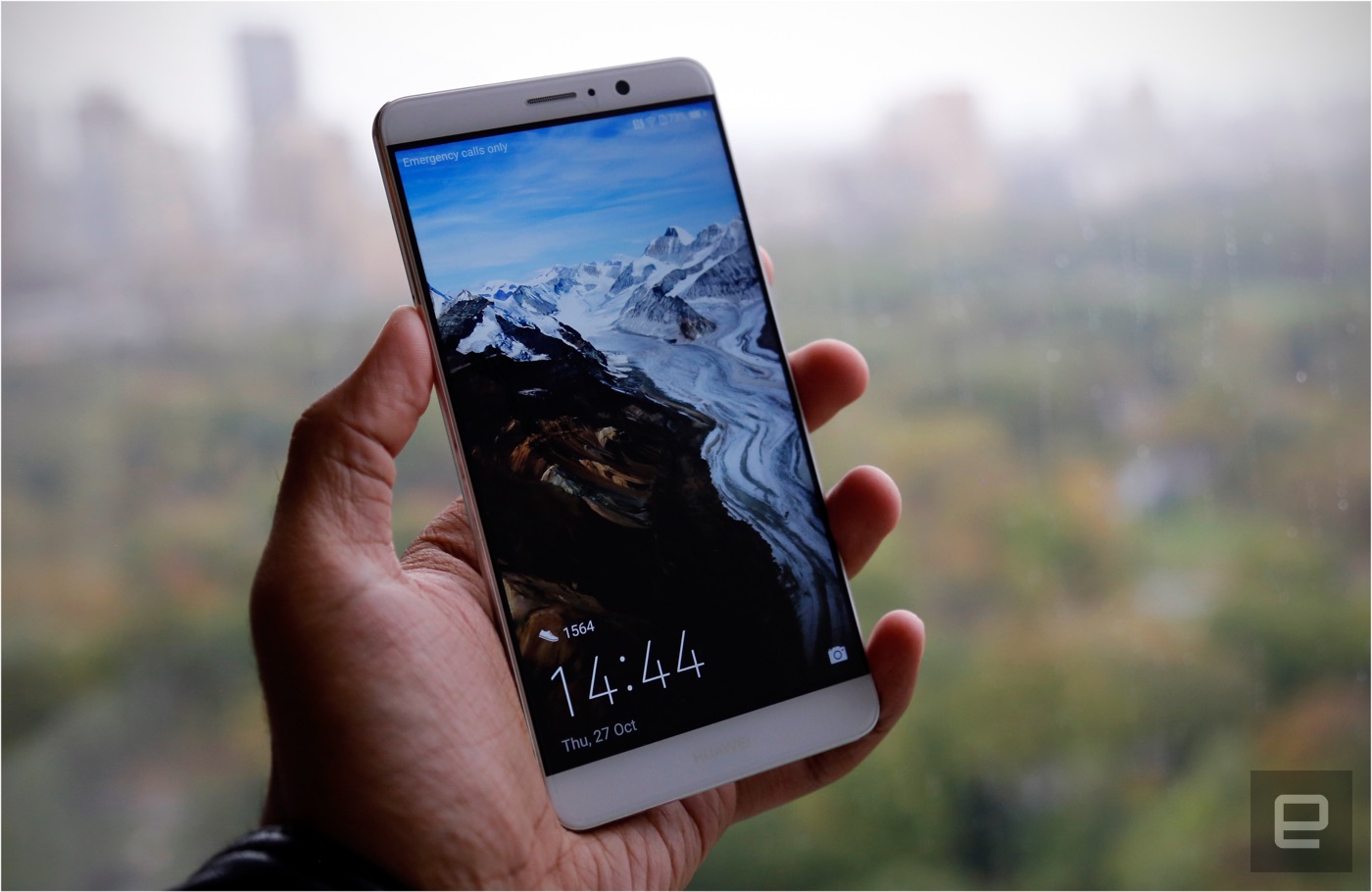 Huawei's slice of the worldwide mobile pie isn't as big as it used to be, but hey, at least it keeps getting better at making big phones. We didn't know it would be the last Nexus phone, but the 6P was a solid send-off. Then came the enormous Mate 8, which was incredibly well built (even if the company's EMUI interface sometimes made me want to jam a fork in my eye). With the new Mate 9, however, Huawei is trying to do things a little differently. Case in point: The phone will eventually launch in the US, a first for the company's flagship phablets. And that stuffed-to-the-gills custom interface? It's been streamlined, thanks to Huawei's new user experience chief. Fortunately, the company's smart moves don't seem to end there. 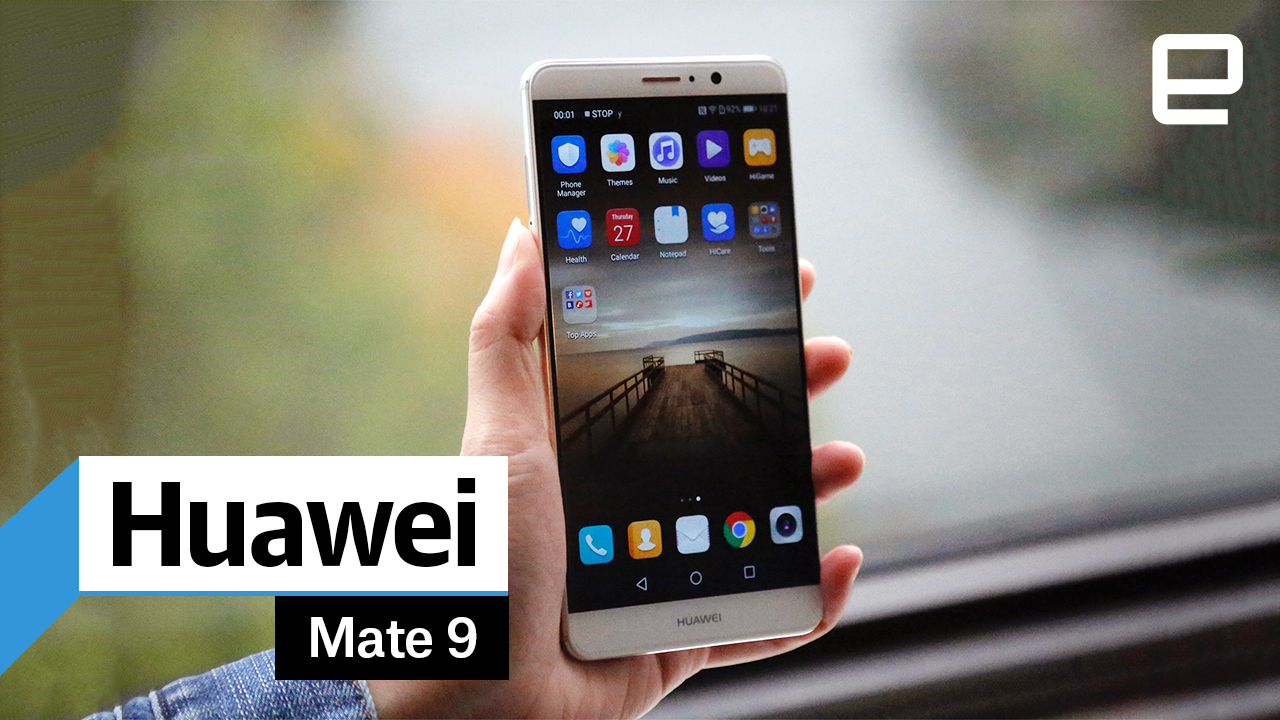 For one, the Mate 9 feels impeccably solid, with a sloping back, rounded edges and an almost complete lack of bezel running around the sides. Altogether, these flourishes make the Mate 9 feel like a premium piece of kit and a little smaller than you'd expect. That last bit is especially important, since the Mate 9 sports an enormous 5.9-inch, 1080p LCD screen -- it's still big, but surprisingly manageable. It helps that the Mate 9 is light too, so it'll fit into a Daydream VR-compatible headset without straining your neck.

It would've been nice to see Huawei run with an even more pixel-dense display considering that Daydream compatibility, but the screen we got seemed bright and plenty punchy. That more modest resolution probably helps the Mate 9's 4,000mAh battery do its thing too, and the SuperCharge tech Huawei has been working on should get a bone-dry Mate to almost 60 percent in half an hour. 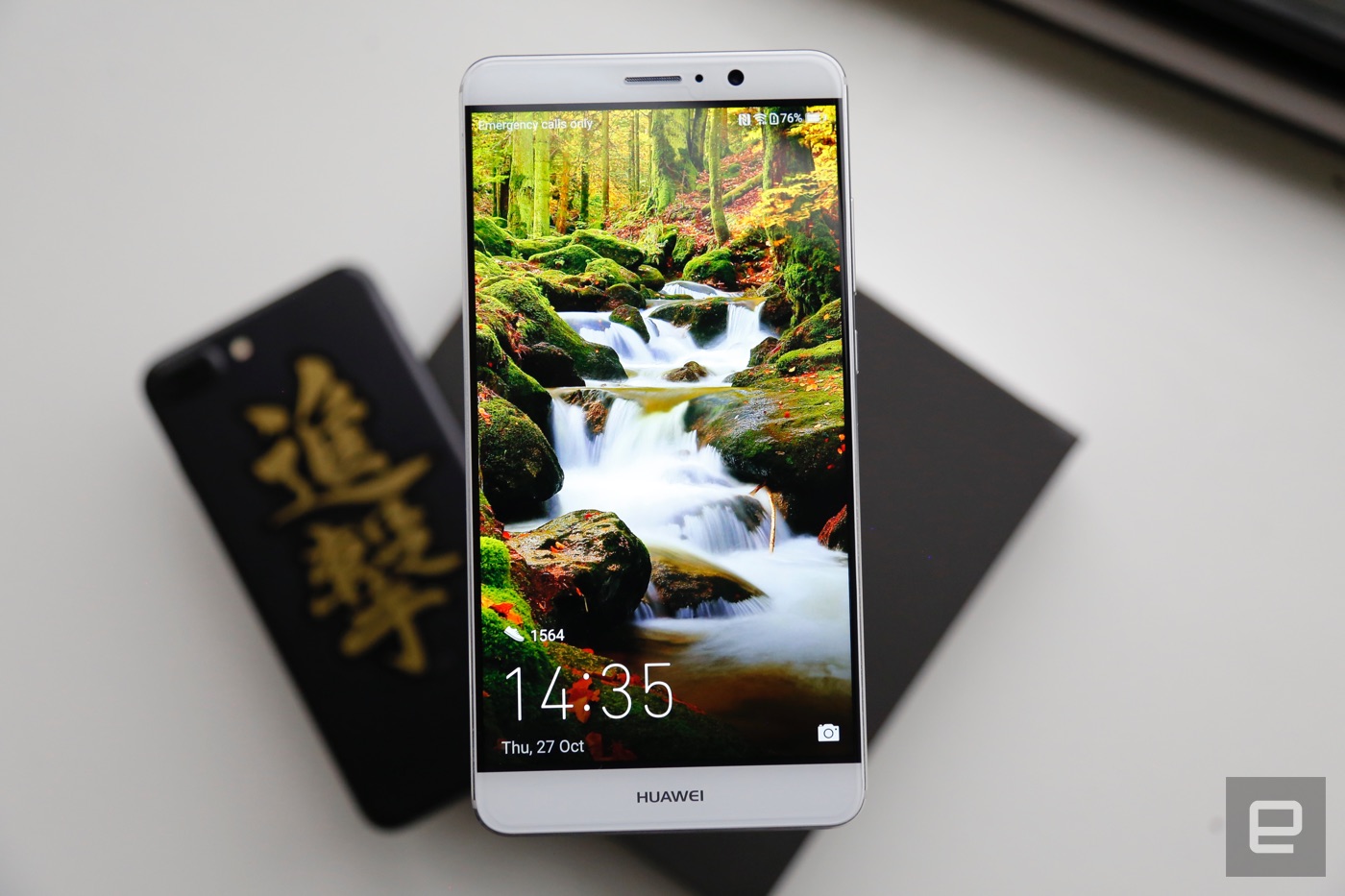 Huawei once again chose a Kirin chipset -- the high-end 960 -- to take on the Exynoses and Snapdragons of the world. It's an octa-core affair paired with 4GB of RAM and an octa-core Mali graphics processor. We'll have to wait to see if the Mate 9 stacks up to the rest of 2016's best phones, but the unfinished models we took for a spin didn't break a sweat, even as we tried to break them. (Note to the Huawei folks reading this: I'm kidding. Sort of.) Now, sheer power is one thing, but applying it more intelligently is a whole other matter. Ever notice how smartphones, like computers, start to run more slowly over time? Huawei says it's using a machine-learning algorithm to prevent that power drain from happening.

To hear Huawei tell it, the algorithm looks for patterns in how you use your device over time. If you like to play Hearthstone immediately after using Twitter, for example, the Mate 9 should pick up on that and optimize available memory and CPU performance while you're still checking tweets. The Mate 9 also uses a specific kind of storage system that keeps your saved bits from getting fragmented for even better performance down the road. This all sounds pretty great, but you should still probably take these claims with a grain of salt. Huawei promises that performance won't suffer over time, but there's no way for us to check those claims right now.

The thing about using Huawei phones is that even though they pack a lot of power, the underlying software and interface are always sort of a mess. They're working on it, though, and we've got a new version of Huawei's EMUI that honestly feels a little less cluttered. Icons have been redesigned, for one, and features that get used frequently are now easier to get to. That might not sound like a huge step forward, but it is. The EMUI of old involved a lot of putzing around, but now something like 90 percent of the features people use most frequently are accessible within three taps. Beyond that facelift is the ability to run messaging apps like WeChat and Line in a split-screen mode and a sort of private zone where you can store files and apps you don't want others peeking at. It's still a long way from stock, but there's a good chance you won't hate this software. 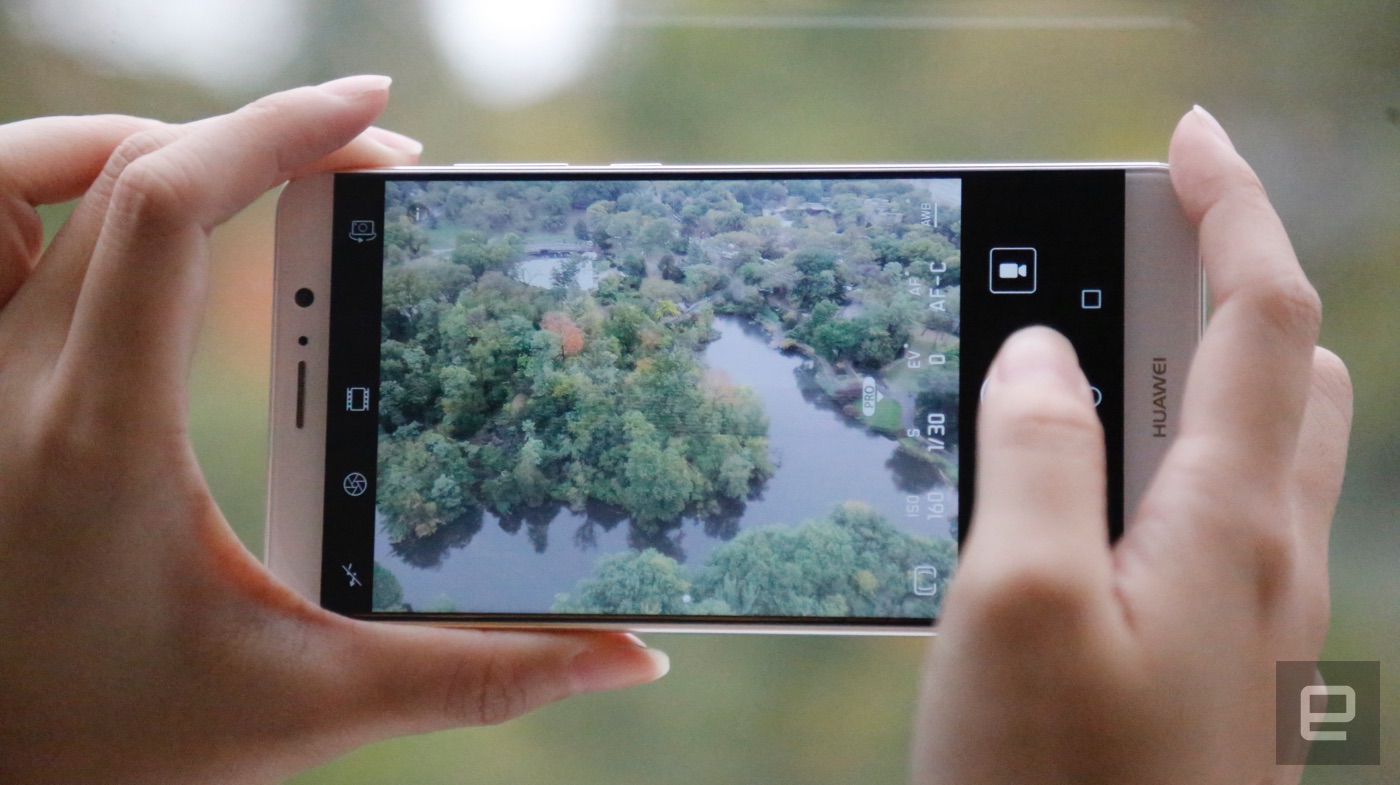 Then we've got the cameras. You guessed it: Huawei took a cue from the P9 and gave the Mate 9 a dual-camera system. There's a 20-megapixel monochrome sensor around back that adds extra detail to the color data captured by the main 12-megapixel sensor. They're both Leica-certified, and together they're used for a sort of 2x zoom mode ... which the company has been pretty bad at explaining. Throw in the usual slew of photo modes and a handy adjustable aperture feature in the software and you've got the makings of a fun, fascinating smartphone shooter.

Huawei hasn't said when the Mate 9 will hit the US or how much it'll cost when it does. Even so, the Mate 9 leaves a strong first impression. In light of stiff competition in its native China and abroad, it's nice to see Huawei's bringing its A game. Stay tuned for more juicy details as we learn them.

In this article: android, china, gear, hands-on, huawei, kirin, kirin960, machinelearning, mate9, mobile, smartphone
All products recommended by Engadget are selected by our editorial team, independent of our parent company. Some of our stories include affiliate links. If you buy something through one of these links, we may earn an affiliate commission.