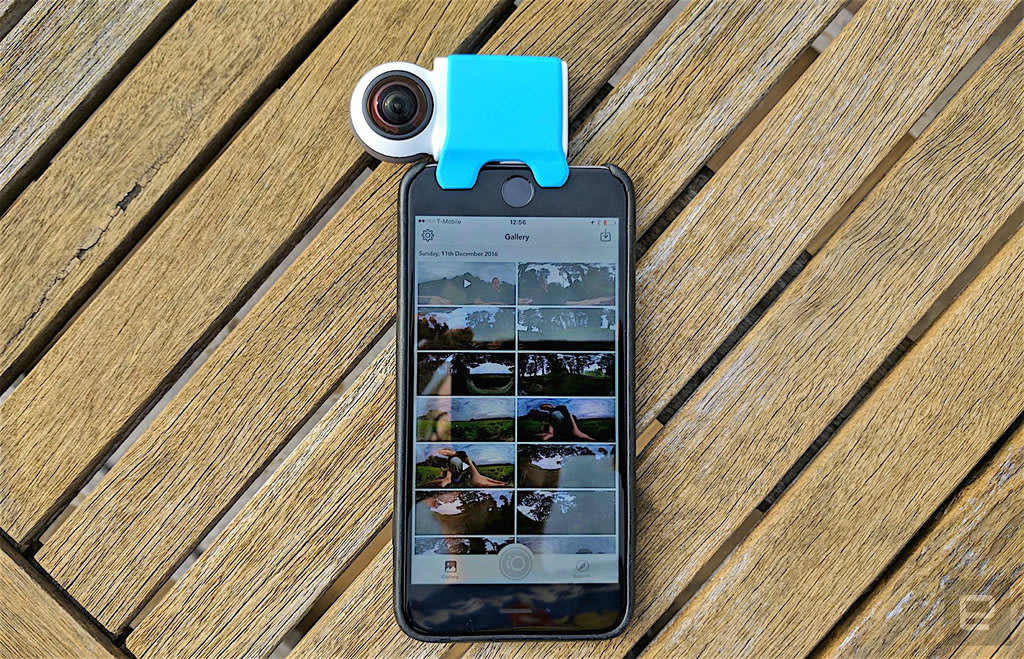 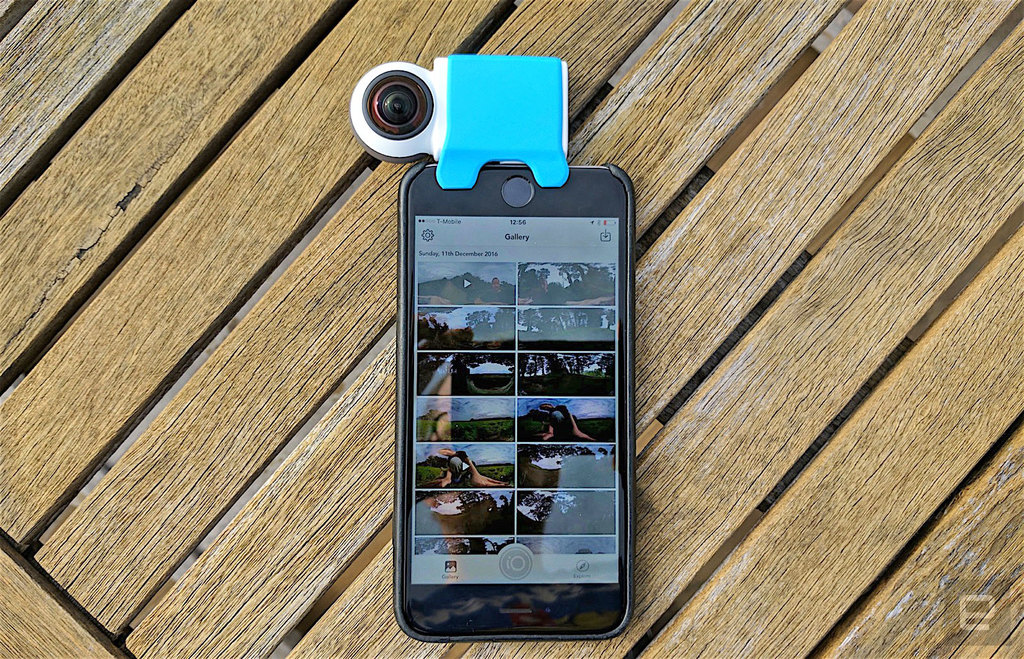 360 cameras exist. YouTube already supports livestreaming in the immersive format. Yesterday Facebook finally opened up its popular Live service to 360 videos too. But not for everyone. Right now it's just select pages, with National Geographic kicking things off today. Officially, then, 360 livestreaming is going mainstream. But if the new world of live, spherical video is to succeed, livestreaming needs to get easier, with a home on a major social network.

YouTube has already made headway in this space, but, much like how video streaming didn't gain traction with the broader public until Meerkat and Periscope (and then Facebook) piped it direct into your friends' feeds, 360 needs the immediacy of social to succeed. To do that, it needs hardware that's easy to use and a seamless app experience.

If you go to Google and search "how to livestream 360 video on mobile," you'll get a slew of results, but frankly, very few of them are appealing. I've played with several 360 cameras, but it wasn't until I tried the new iO from Giroptic that I realized how sucky the livestreaming experience with those other cameras was. Giroptic makes streaming to YouTube in 360 barely more than a button push. The quality is decent for a device of this size, and social sharing is baked right into the app. Regular streaming/Facebook Live on mobile just requires a smartphone, so it never had this hardware problem to figure out.

For many of us, our cellphone is our primary camera (inasmuch as it's probably the camera you have on you right now). For conventional streaming, whether that's on Facebook, YouTube, Periscope or even Instagram, the humble smartphone has everything you need: a camera and an internet connection.

For 360 video, on the other hand, you need a dedicated camera. Current products like Ricoh's Theta and Samsung's Gear 360 might pair with your phone, but they don't currently provide an elegant solution for streaming live. The camera needs to be able to stitch in real time, have the bandwidth to shuffle video off to the internet, and offer an effortless way for users to do that.

Giroptic's iO isn't perfect, but it's edging closer to the sort of thing live 360 video needs. As it connects to the lightning port, you'll need to hold your phone upside down (no biggie, but it takes the edge off the seamless experience); on a plus note, it frees up your WiFi connection. Despite being smaller than other products, it's still a widget stuck to your phone. Short of phone makers adding a 360 cam to their handsets, though, that's something we'll have to live with. There's also no current Android solution (though the Insta360 Air might fill this gap).

What the iO does have going for it is the all-important live stitching, and that ridiculously easy way to start broadcasting live (at least for YouTube so far). This is basically the same simplicity that makes going live on Facebook so popular right now. 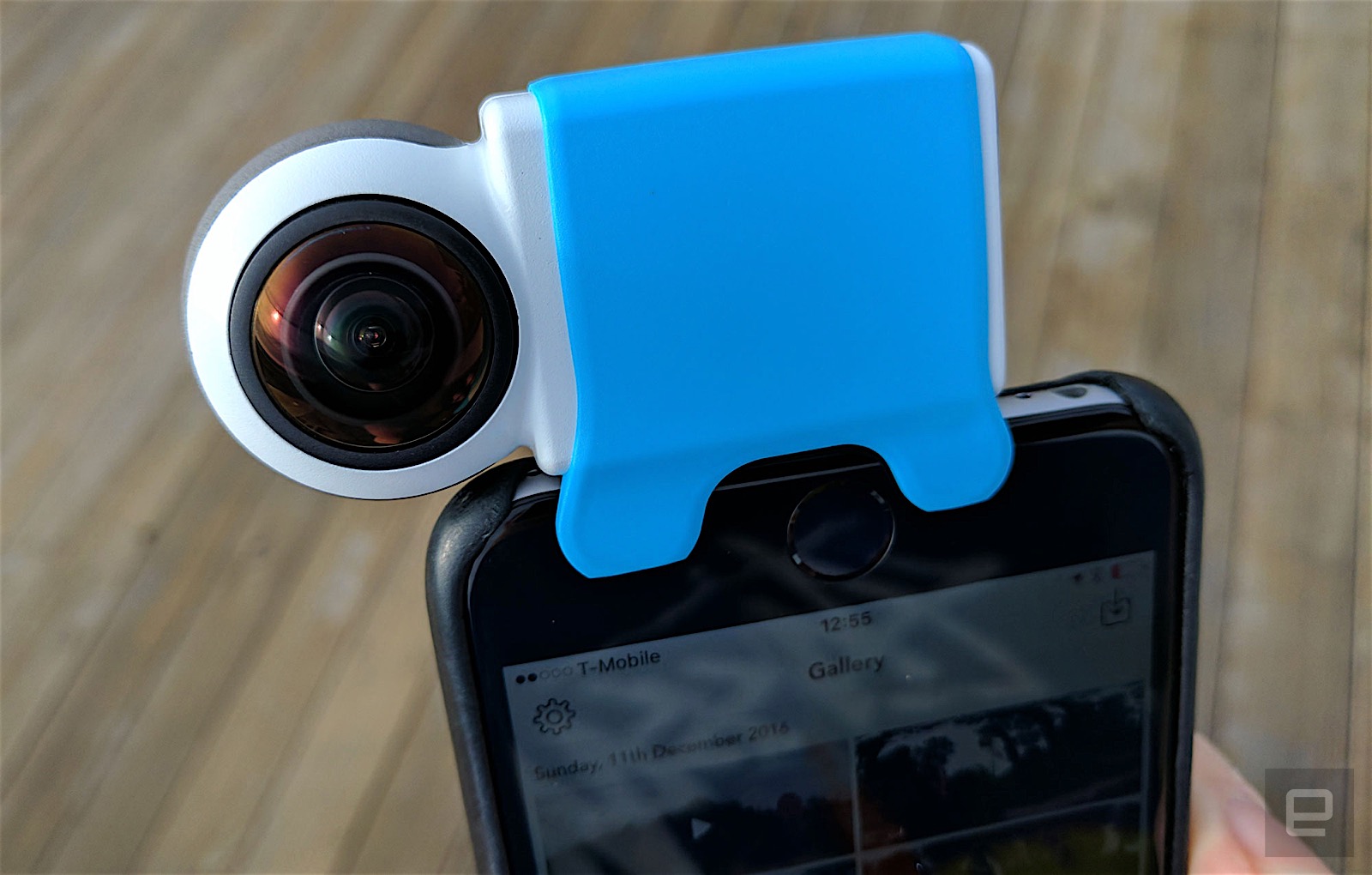 A frictionless experience is also way more important for Facebook than YouTube. Facebook itself knows this. In yesterday's announcement about the National Geographic content, it reminded us, "Live video on Facebook gives people an immediate, authentic window into what's happening in the world right now." It's much harder to be immediate and authentic when trying to connect something over WiFi direct, or when the camera is hanging off your laptop with a USB cable. But those are things you're likely more okay dealing with for your studio-based YouTube or Twitch channel (even if that studio is your bedroom).

One of the key selling points for vanilla Facebook Live is that it's a way to reach all your friends. YouTube might be where you go to follow channels and enjoy non-live videos, but the social networks are a direct feed into your social circle, and that's an important difference. For this reason, the hardware part of it needs to be as near to being a part of your phone as possible.

Facebook's app is already on millions of phones; just adding a button to "go live" makes sharing video in real time incredibly tempting, exciting almost. The authenticity Facebook speaks of naturally follows, whether it be the levity of Chewbacca Mom or the tragedy of Falcon Heights. These same moments could happen on YouTube, of course, but the sticky grip of the social feed is a well-carved channel for sharing and consuming. For 360 video to have the same impact as live sharing with regular video, we can't wait for our devices to pair, or hope our friends are following us on YouTube.

Let's not forget that Facebook is way more invested in 360/VR video than other social networks. What's weird is that Facebook has already designed a camera for VR video; it just went totally the other direction. Unveiled at the F8 conference earlier this year, the "Surround 360" is a pricey solution aimed at professional creators.

There's also the whole "Why do I want to stream in 360 anyway?" thing. Of course, it'll always remain a more niche way to share moments than flat video, but often, a new technology has to hit a wide audience before it finds its voice. Just look at the myriad ways people use Twitter, or how users took ownership of Snapchat, for evidence of that.

Unlike Facebook's high-end product, Giroptic's modest dual-camera setup won't serve up 8K per eye (instead you'll get a modest 2K sphere), but as the company pointed out to me, ironically, social users are usually more forgiving when it comes to streaming quality. There are some barriers that neither Facebook nor camera makers can surmount though, and that's the bandwidth required for streaming 360 video. Giroptic, for example, currently needs a solid 4.5Mbps connection for live video.

Giroptic's camera has a few kinks it needs to iron out. The stitching is good, comparable to Ricoh's and Samsung's, but the app I was shown was still in beta, and not quite ready for prime time. The current launch date is January 17th, though, so there's still a little time. The iO will sell for $249 (on par with Samsung Gear 360 and Ricoh Theta), which isn't in the impulse-purchase territory, but it's far more palatable than the multi-thousand-dollar rigs from Nokia, GoPro and (relatively affordable) Orah. The real aha moment, though, was that this is how streaming should work for 360.

I asked Facebook about its plans for bringing live 360 video to everyone, and the response was predictably coy, a spokesperson simply telling me, "We're starting with a few partners so that we can test and learn from them as we work to create the best experience possible for people and Pages alike." For now, though, all the pieces are finally there. But if Facebook wants to make 360 video go mainstream (and there's every indication it does), it could do worse than follow Giroptic's lead and tackle the camera problem. Be sure to know the content will follow.

In this article: 360, 360video, cameras, editorial, facebook, facebooklive, gear, giroptic, io, live, TL17360VID, vrvideo
All products recommended by Engadget are selected by our editorial team, independent of our parent company. Some of our stories include affiliate links. If you buy something through one of these links, we may earn an affiliate commission.