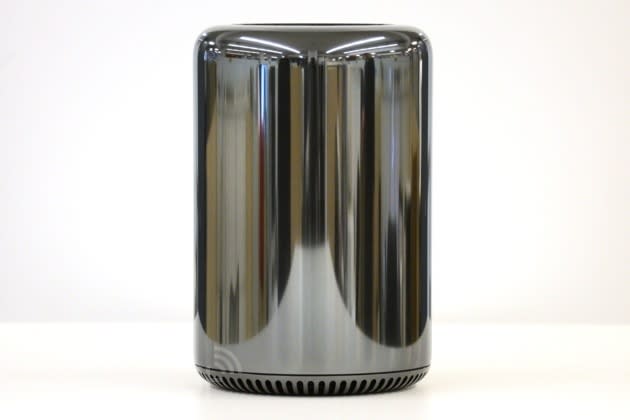 The last new Mac Pro was announced back in 2013, and not much has changed much since. The iconic shiny objet proved a difficult fit for its pro users, and as a consequence Apple is apparently fundamentally rethinking its top-end computer series and everything that comes with it. According to a roundtable the company held with reporters earlier this week, Phil Schiller, Apple's SVP of worldwide marketing added that since its new Pro will be a far more modular system, you can also expect a new Pro display to land alongside it. However, it told Buzzfeed that "You won't see any of these products this year." That's because Apple's engineering team is apparently still working to design a system that can easily and efficiently be upgraded -- the biggest issue many had with the current Mac Pro.

We'll note that the Pro devices are a smaller part of Apple's computer pie: Schiller noted that desktop make up just 20 percent of the Macs it ships -- and its Mac sales were up in 2016, compared to the still-shrinking Windows PC market. Apple said that its Mac Pro owners are a "single-digit percentage."

Regarding the existing model, "We designed ourselves into a bit of a corner," said Craig Federighi, Apple's SVP of Software Engineering. The Pro had a triangular heat-sink system that didn't lend itself well to pro-level upgrades. The company was also taking the chance to reiterate that its Mac series remains very important to it. Schiller, talking to Techcrunch: "The Mac has an important, long future at Apple... and if we've had a pause in upgrades and updates on that, we're sorry for that — what happened with the Mac Pro, and we're going to come out with something great to replace it."

"We've asked the team to go and re-architect and design something great for the future that those Mac Pro customers who want more expandability, more upgradability in the future', added Schiller, according to Daring Fireball.

The existing Mac Pro isn't going anywhere just yet — Apple just announced a performance bump for it, one that will make the computers "faster and better for their dollar." It's shaved a thousand bucks off its 6-core Intel Xeon processor, dual AMD FirePro D500 GFX rig (now $2,999), while introducing a new $3,999 rig with an 8-core processor and dual FirePro D700 graphics. Anyone waiting for more than a bump is going to have to wait until 2018.

In this article: apple, gear, mac, macbook, macpro, modular, personal computing, personalcomputing, pro
All products recommended by Engadget are selected by our editorial team, independent of our parent company. Some of our stories include affiliate links. If you buy something through one of these links, we may earn an affiliate commission.