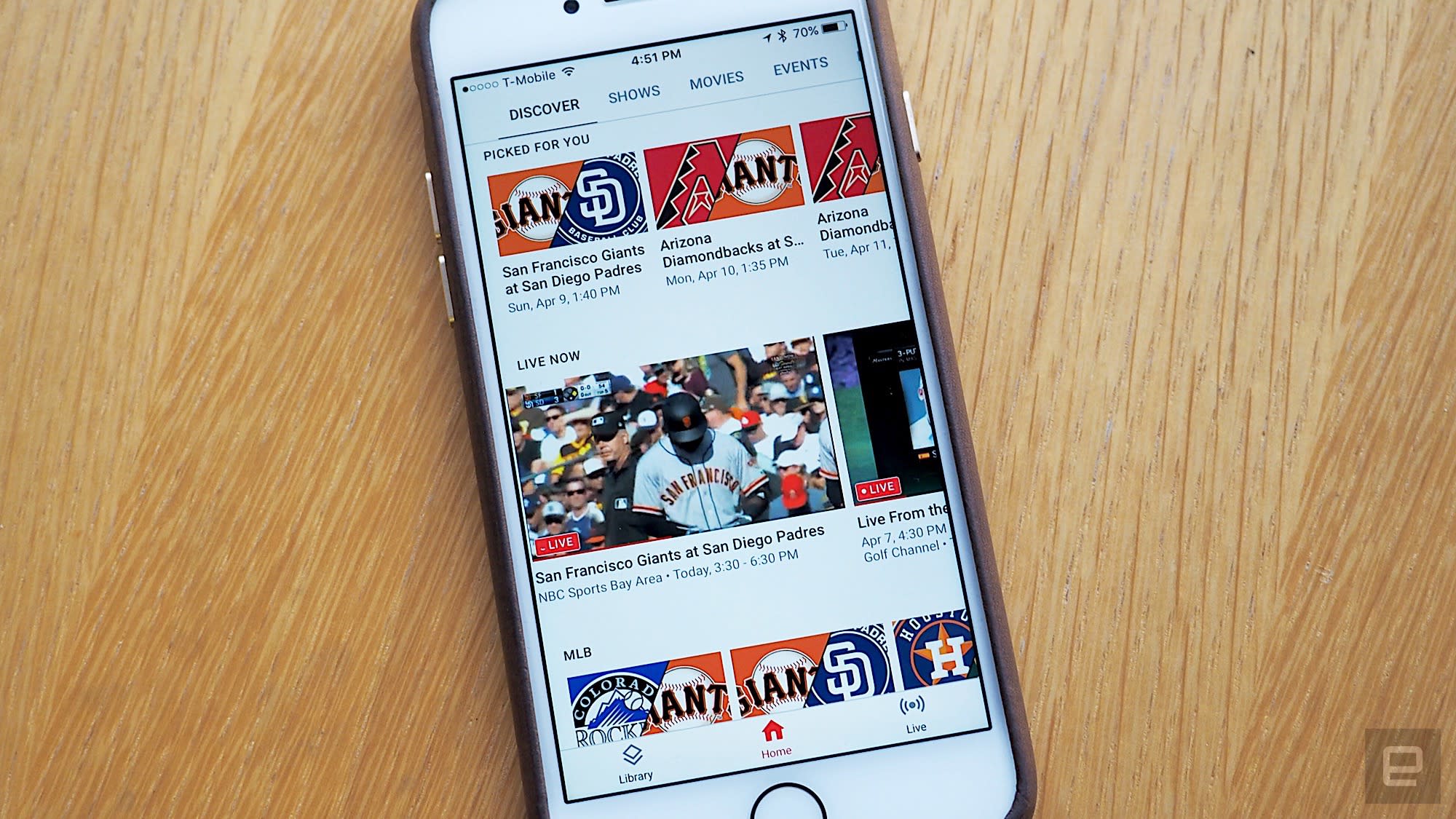 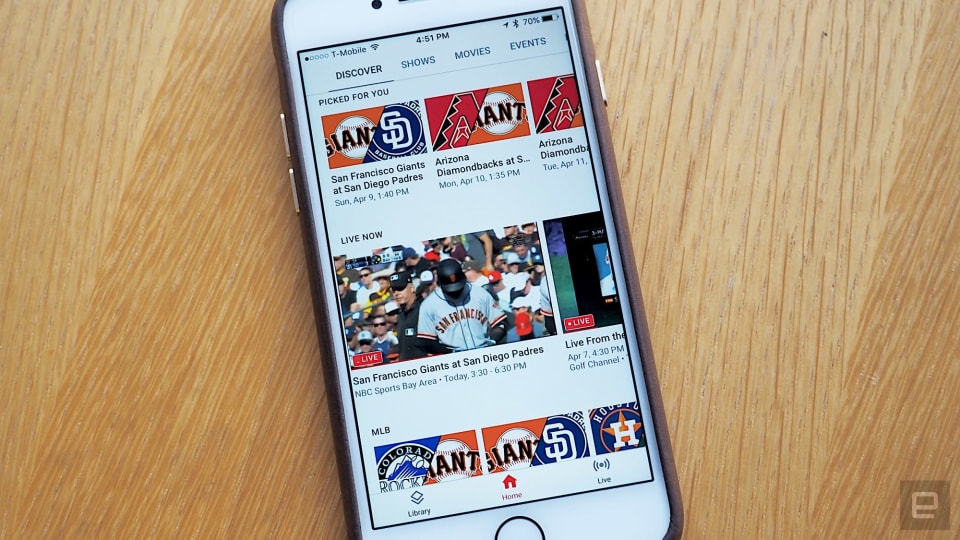 I don't watch a lot of TV. I don't watch Game of Thrones or Walking Dead or many of the TV shows that are usually at the top of the popular zeitgeist. Instead, my daily entertainment is usually filled with YouTube videos and on-demand shows from Hulu or Netflix. In almost all respects, I am the perfect candidate to cut the cord. There was only one thing holding me back: baseball. I am a huge San Francisco Giants fan and I have a deep desire to watch games live. With the arrival of YouTube TV (and a few other services) I am now, at long last, finally free.

It's not like I haven't tried to get out from under cable's clutches before. I signed up for MLB.TV (and downloaded the At Bat app) a few years ago, thinking I would be able to watch baseball games on the go. But unfortunately, Major League Baseball black out restrictions meant that I couldn't watch local games live. Sure, I could hook up to a VPN and watch it that way, but I couldn't figure how to have that work on all the devices in our house (We have three computers, two phones and a Roku). Sticking to cable was just easier.

Last week, however, things changed. When I heard Congress voted to roll back regulations that would prevent ISPs from selling your browser history, I decided to finally end my 20+ year affair with Comcast's Xfinity. I was already uncomfortable witth the company due to its data caps and reports that it was throttling bandwidth. Plus, my monthly fees had recently gone up and I couldn't work out a way to get a cheaper rate despite multiple calls to customer service. And even though Comcast had said it wasn't going to sell customers' browser history, it still uses "non-personally identifiable information" from internet and cable TV packages and you have to opt out of targeted ads. I was done. I decided to switch to Sonic, a small local ISP that made a public statement urging Congress to preserve the FCC's Broadband Privacy Rules prior to the vote. Sonic's also one of a few ISPs that is highly recommended by the Electronic Frontier Foundation for its defense of user rights. DSL still isn't as fast as cable in my neighborhood, but I didn't care -- I'll take the speed hit just to get away from Comcast.

But that doesn't solve the TV problem. As I said, I really want to watch local baseball live. We thought of going with Dish, because that would give me pretty much the same TV package that Comcast did. But the idea of a two-year contract didn't sit right with me, plus the monthly bill would end up costing more anyway. I felt like I was stuck. Maybe I don't need to watch baseball live. Maybe I could go without it. The thought hurt my heart, but maybe it wouldn't be so bad. I could still listen to the games on the radio, right?

Two days ago, my husband sent me a text that read "Hmm. YouTube TV has NBC Sports Bay Area" (That's the local channel that airs Giants games). I was intrigued. So I signed up for a 30-day trial and to my delight, he was right. Not only that, but with YouTube TV, you can actually select your favorite team and add it to your library. This means that it'll automatically record every single game your team plays, in perpetuity, regardless of channel or time. So if the Giants game is on, say, ESPN instead of NBC, it'll still automatically record it. What's more, with YouTube TV's unlimited DVR (up to nine months anyway), I wouldn't have to worry about storage space. I was over the moon. This could finally be the solution that I was looking for. In order to do due diligence, I looked at the other cord-cutter packages on the market. I was pleasantly surprised to see that both Sling TV and Playstation Vue offered regional sports too, so we signed up for trials for both. I was disappointed to find that Sling TV wouldn't let me rewind or pause live TV, and recording games on Playstation Vue isn't as easy. With PS Vue, I can't just follow a team like I can do with YouTube; I still had to know which channel and what time the game will be on in order to record it. DirecTV Now has local sports too, but for there's no DVR. It really looked like YouTube TV would be best for my needs.

Yet, it's not perfect. YouTube TV doesn't have Turner networks, which means I would miss out on games that aired on TBS and TNT. So we decided to supplement YouTube TV with another cord-cutter service. Since Sling's Orange package is just $20 a month (versus PlayStation Vue's $40 a month and DirecTV Now's $50+), we decided to go with that. Altogether (YouTube TV and Sling), that would be just $55 a month, which is a bargain compared to most cable and satellite packages. Yes, YouTube only has a handful of channels and Sling's DVR feature isn't up and running just yet, but this slim combo was enough for me to cut the cord after two decades of cable dependence. And who knows, even this might change. YouTube could very well add Turner networks in the future. Hulu's upcoming live TV service might have regional sports as well, which could be even better than what YouTube is offering. The beauty is that now, I can switch services any time I want because I am no longer tied down by any one company.

The idea of cord-cutting has always appealed to me, but there was never a package that seemed right. YouTube probably didn't have sports fans front and center when it planned its service, but it delivers a solution that is probably of interest to them anyway. At least for people like me. So, it's official. I'm a cord-cutter. And I have YouTube to thank for showing me the way.

In this article: av, gear, google, internet, mobile, youtube, youtubetv
All products recommended by Engadget are selected by our editorial team, independent of our parent company. Some of our stories include affiliate links. If you buy something through one of these links, we may earn an affiliate commission.