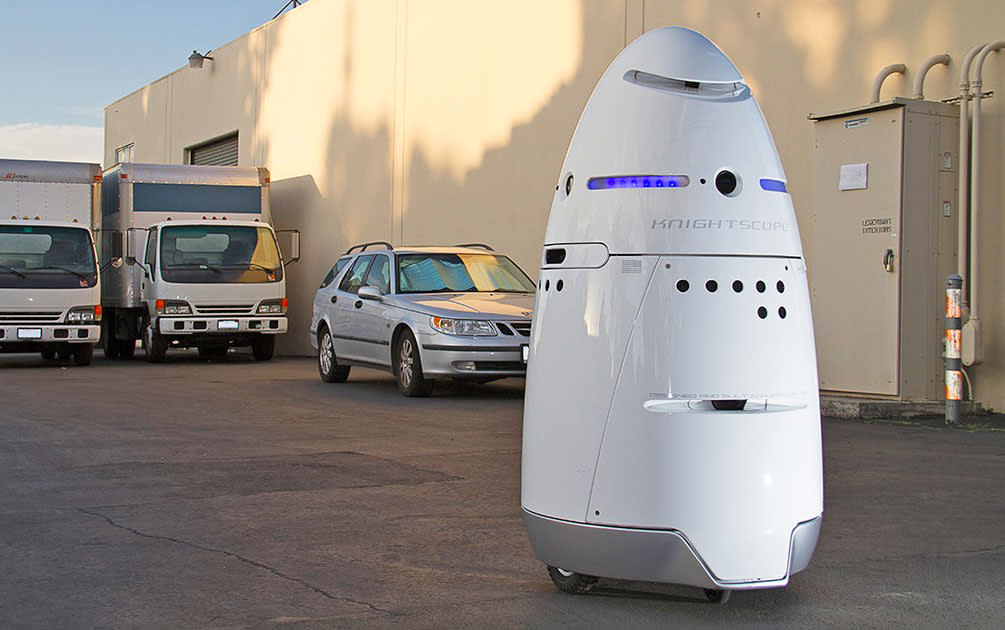 Sure, the K5 isn't the cutest robot making its first steps into human society, but that doesn't mean drunks get to knock it over. One of the five-foot droids took a tumble last week in Mountain View, when a drunk man took umbrage to its whistlin', patrolling ways. (Knocking it over is a bit of feat in itself: The thing weighs 300 pounds.) It's not the first robot to suffer either. Softbank's (more adorable) Pepper has felt the cruelty of mankind while working in a phone store, while Hitchbot lasted just two weeks when it tried to cross America. It suffered a vandal attack in Philadelphia that cut its journey short.

Police say Jason Sylvain knocked down the Knightscope droid while it was patrolling the parking lot last week. The man faces prowling and public intoxication charges, but it appears the robot gets some credit for arresting its attacker. Stacy Dean Stephens, Knightscope's VP of marketing told CNET that: "The robot did exactly as it was suppose to do. The 'assault' was detected and immediately reported. The alarms on the robot sounded, the suspect attempted to flee the scene and was detained by one of my colleagues and me until the Mountain View Police arrived."

Sylvain apparently wanted to test the security of Knightscope's patrol drones. We're more intrigued as to how he toppled 300 pounds of robot. That might prove useful in the future.

In this article: arrest, crime, drunk, gear, k5, knightscope, patrolrobot, robot, robots, security
All products recommended by Engadget are selected by our editorial team, independent of our parent company. Some of our stories include affiliate links. If you buy something through one of these links, we may earn an affiliate commission.