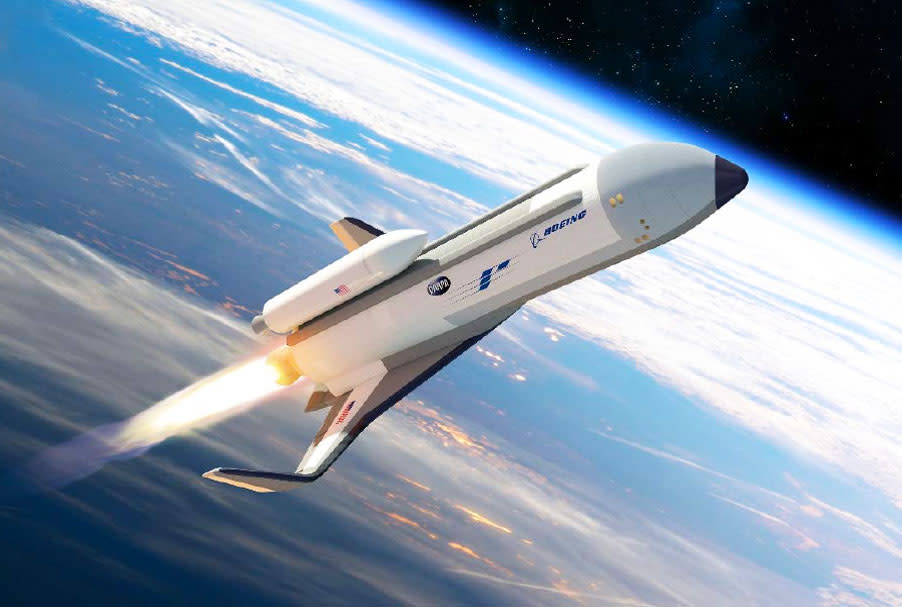 A few years ago, DARPA started work on a new experimental aircraft project called the XS-1, a vehicle designed to make launching satellites a faster, less expensive endeavor. Today, that project just took a huge leap forward: DARPA has announced that it's partnering with Boeing to build its next generation hypersonic space plane. Specifically, the aircraft manufacturer has been tapped to complete advanced design work on the XS-1 project, following up on the concept Boeing pitched to the agency during the project's early stages -- which it will now help build and test over the next several years.

In practice, this means Boeing is now building a unmanned, reusable hypersonic jet with the goal of running ten test flights over ten consecutive days by the year 2020 -- a program that's designed to prove that the XS-1 will be able to launch satellites into low-earth orbit on short notice. "The XS-1 would be neither a traditional airplane nor a conventional launch vehicle but rather a combination of the two," DARPA's Jess Sponable explained in a press release. "With the goal of lowering launch costs by a factor of ten and replacing today's frustratingly long wait time with launch on demand."

The XS-1 will manage this feat by flying to suborbital heights without boosters before deploying a disposable, secondary rocket to push its payload into orbit. Better still, the spaceplane will be able to take a second satellite up within hours of delivering the first. Well, that's the plan anyway -- the project is still years away from being finished, and the earliest on-ground engine tests won't start until 2019 at the earliest. Until then, we'll have to settle for DARPA's concept video, which admittedly, is still pretty cool.

In this article: applenews, boeing, darpa, gear, nasa, satellites, space, spaceplane, TL17SPCSHP, video, xs-1, xs1
All products recommended by Engadget are selected by our editorial team, independent of our parent company. Some of our stories include affiliate links. If you buy something through one of these links, we may earn an affiliate commission.