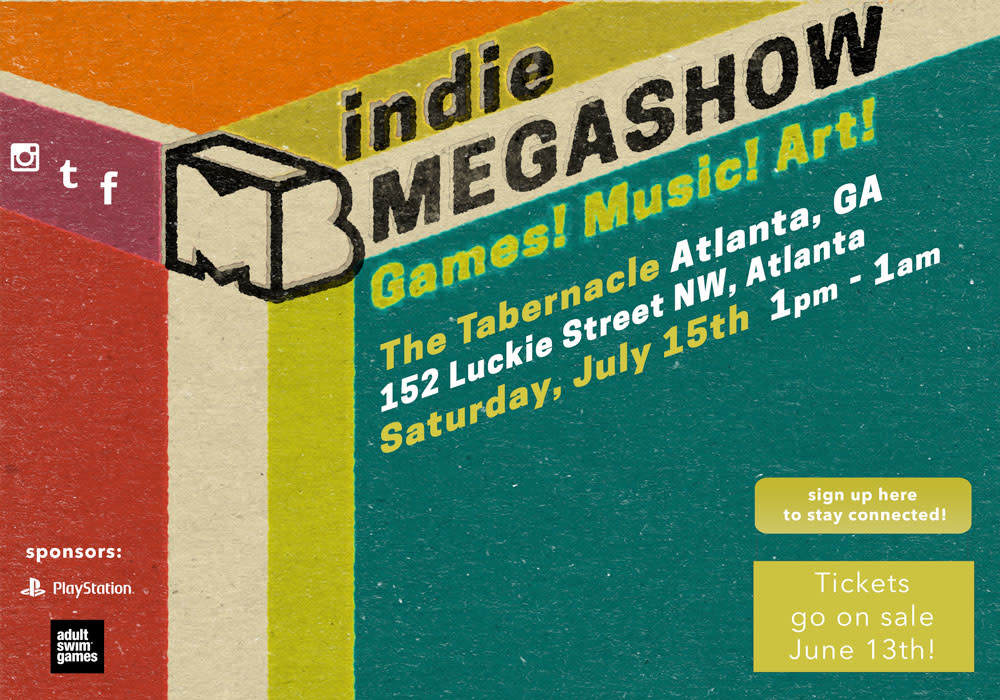 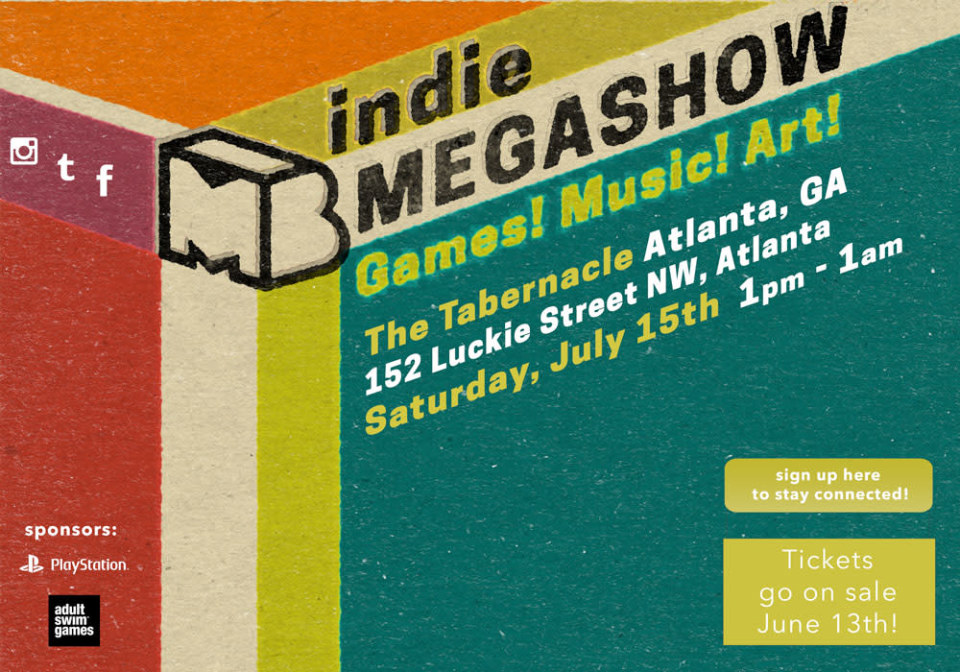 The Indie Megabooth, a bastion of independent games at conventions around the world, is growing. Again. But this time around, things are different: The Megabooth is expanding beyond games.

The Megashow is the first standalone festival to be spun off from the Megabooth proper: It's a roaming, daylong fair designed to highlight local creatives and bring communities together around video games, art and music. The Megashow will make its debut at the Tabernacle in Atlanta on July 15th.

"Our initial goal was to expose new audiences to indie games and show them that there was this whole other side to game creation," says Megabooth leader Kelly Wallick. "Over time, we've moved so far past that to the point that we have fans and press who specifically come to the Megabooth area to discover content and reconnect with teams and games they love, which is amazing. But on the flip side of this, it has become more challenging to reach new audiences."

That's where the Megashow comes in. Wallick hopes it will introduce the wider artistic world to video games, specifically showcasing the creativity and innovation of the independent industry. The Megashow is looking for Atlanta-based musicians, traditional artists, installation work, rappers, crafters, local geek shops and, of course, video game developers, just to name a few potential vendors. Adult Swim Games is already onboard and will showcase a handful of its latest titles, plus some projects that haven't been released yet. The people behind Indie Megabooth know how to put on a successful, genre-shifting show. It popped into existence in 2012, at a time when Fez was the most popular game among fans of independent titles. Microsoft's indie-publishing program, ID@Xbox, was still a year away, and Sony was too focused on selling the Vita to worry about non-partnered programmers.

It was an exciting time to be independent. Indie Game: The Movie debuted in May that year, and technology was advancing in a way that enabled more people than ever to create the games of their dreams. The mainstream gaming industry was just about to realize the potential within indie development, and the community was bursting with fresh ideas.

The Indie Megabooth wrapped up all of this tension and explosive growth in a humble space at PAX East, highlighting a collection of burgeoning independent developers and their latest games. The team chose well: This first installment included Owlchemy Labs (which made Job Simulator and was bought by Google), DrinkBox Studios (which was building the acclaimed platformer Guacamelee) and Ska Studios (which went on to make the 2D, Dark Souls-style RPG Salt & Sanctuary).

Oh, and the booth featured Hello Games, the studio behind the controversial indie superhit No Man's Sky. Back then, Hello was focused on the mobile racing series Joe Danger.

The Indie Megabooth came along at the right time with the right people, and it had the necessary infrastructure to introduce amazing independent games to new audiences. Today the Megabooth is a staple at major gaming conventions across the globe, and it's grown into a massive space featuring dozens of incredible indie games. As the independent-gaming industry has grown, so has the Megabooth.

"My hope is that we have helped shape this growth in the past and will continue to push forward with positive intent as we expand into growing a community of fans -- in the same way we grew our community of developers," Wallick says. "We try to be a slow and steady force of change, to affect as much as possible in our own way, even though the rest of the industry feels like it's moving faster than we can all keep up with."

There is plenty of overlap when it comes to video games, art and music, allowing the Megabooth to leverage its existing infrastructure and turn the first Megashow into something truly special. This isn't about leaving games behind. It's about finding new fans.

"You can end up in a bubble of sorts, where the types of games indie creators make aren't really reaching all the types of players that would really enjoy their work," Wallick says.

She hopes the Megashow will pop this bubble.

"Pulling all these fragmented audiences and creators together feels really reminiscent to what the Megabooth was founded on," she says. "Plus, it feels a bit like bringing the arcade and physical experience back into gaming -- to create a shared, local community experience. Which I personally really miss."

In this article: adultswimgames, applenews, art, business, design, gaming, indie, IndieGames, IndieMegabooth, kellywallick, Megashow, music
All products recommended by Engadget are selected by our editorial team, independent of our parent company. Some of our stories include affiliate links. If you buy something through one of these links, we may earn an affiliate commission.