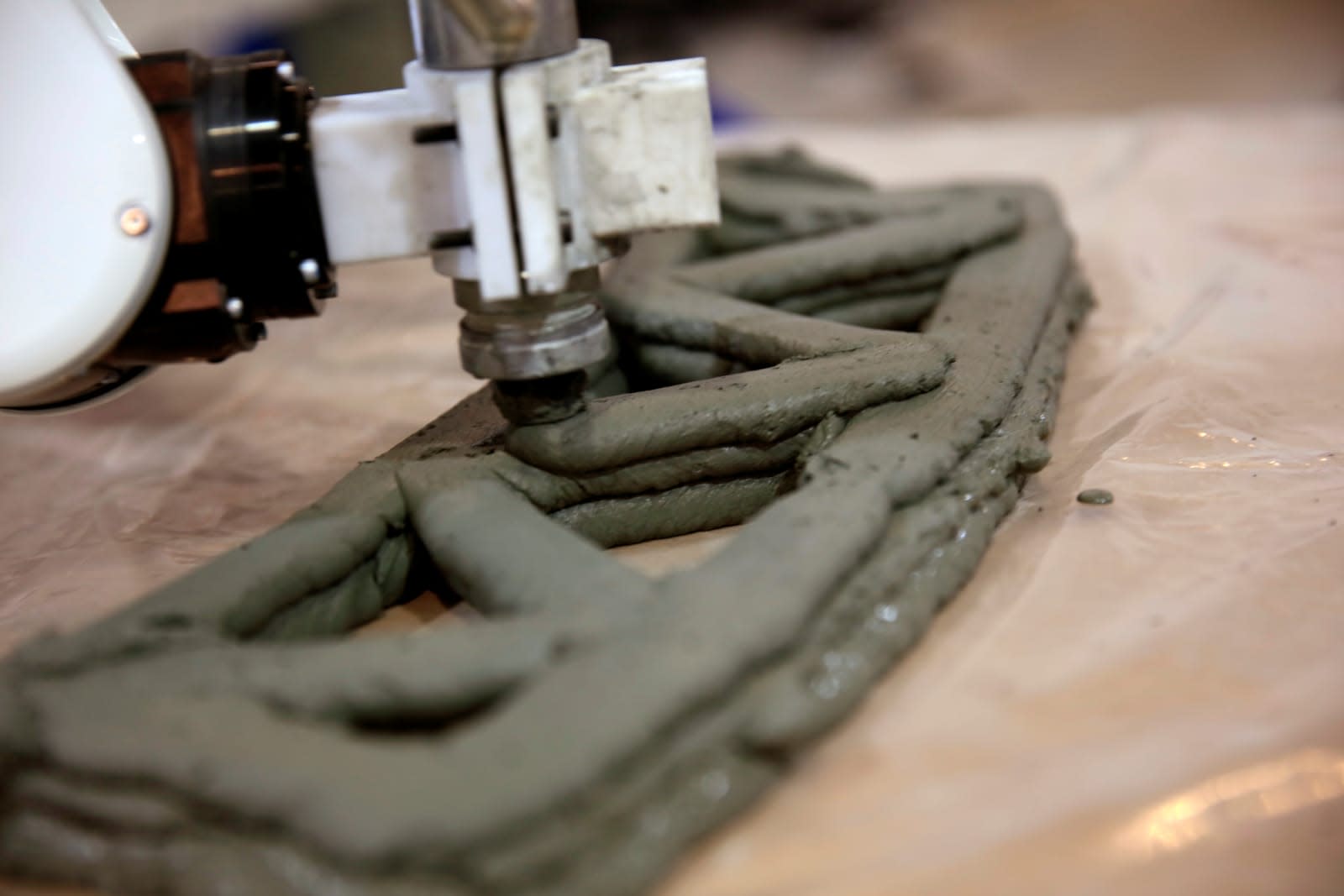 3D printing is a massive category that covers everything from small, DIY, plastic projects to metal meant to be used in Boeing's 787 airplane. Yet another usage has come to light, courtesy of the Eindhoven University of Technology in the Netherlands. Researchers there have started manufacturing parts for a 3D-print reinforced concrete meant for a cycling bridge. When the construction is complete, it'll apparently be the first bridge to use 3D-printed, reinforced concrete (but not the first 3D printed bridge using other materials -- or even concrete itself. (The image above shows a 3D-printed concrete test done at the Nanyang Technological University in Singapore; the one below comes from the Eindhoven University of Technology.) It sounds like the university is getting by on a technicality with its "first-ever" claims, but that doesn't make this project any less interesting. Manufacturing of the concrete parts has begun, and it's anticipated that bridge construction will start in September. To get to the point where the 3D printed parts were considered reliable, the team at the university first built a 1:2 scale model, which was able to hold a 2,000kg (over 4,400 pounds) load.

As for why this process is an improvement over standard concrete techniques, printing a bridge will use far less concrete than pouring it into molds. There's an environmental impact here, as well -- the production of concrete cement releases CO2, so cutting down on those emissions is worth noting. There's also more freedom of design, as a 3D-printer can fabricate shapes that are much harder to produce with a mold.

Another benefit is that the steel reinforcement cables can be printed at the same time as the concrete parts, leading to pieces that are "pre-stressed" for additional stability. Of course, this bridge is meant for much lighter weights than those that handle auto traffic are meant for -- it's not clear that this production technique would be able to scale up to handle a more intense load. But even if 3D printing can only be used for less strenuous jobs, there's still plenty of places where it could be useful.

In this article: 3dprintedbridge, 3Dprinting, applenews, bridges, concrete, design, EindhovenUniversityofTechnology, gear
All products recommended by Engadget are selected by our editorial team, independent of our parent company. Some of our stories include affiliate links. If you buy something through one of these links, we may earn an affiliate commission.