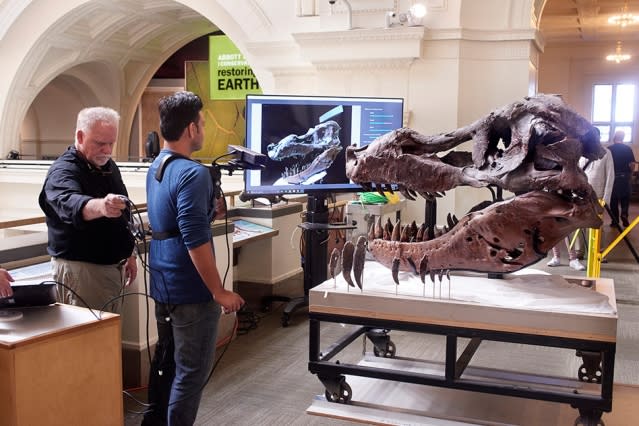 When your fancy high-tech tools aren't suited for the job, it's time to call the tinkers. The Field Museum of Natural History had a certain famous Tyrannosaurus rex skull they wanted examined with 3D imaging systems, but their dental scanners couldn't fit around the dinosaur's massive jaw. They contacted MIT Media Lab's Camera Culture group, which scanned the whole five-foot fossil with a $150 makeshift setup featuring a Microsoft Kinect.

While the Kinect's resolution tops out at 500 micrometers, it only costs $100, compared to thousands of dollars for high-end 3D imaging systems that get down to 50 or 100 micrometers. Still, it was precise enough to scan the skull so scientists can look closer at mysterious holes in the jaw.

There's an easy joke here about using a dinosaur to scan a dinosaur: After reactive outcry following some of Microsoft's Kinect ambitions when the Xbox One launched back in 2013, the gaming titan has slowly shut down the motion-capture camera system. Heck, after only two third-party Kinect-playable games came out in 2016, the developer of one of them (the brilliant Fru) told Engadget at this year's E3 that we shouldn't expect many more games to use the peripheral.

Which is a shame, given how versatile it is: From Nine Inch Nails shows to trying on clothes, artists and technologists have found novel uses for the aging device. But outside hacker spaces, the camera attachment that once came standard with every Xbox sold rarely appears, except occasionally playing second fiddle to today's sexy tech, VR.

In this article: CameraCulture, FieldMuseum, gadgetry, gadgets, gear, kinect, microsoft, MicrosoftKinect, mit, MitMediaLab
All products recommended by Engadget are selected by our editorial team, independent of our parent company. Some of our stories include affiliate links. If you buy something through one of these links, we may earn an affiliate commission.