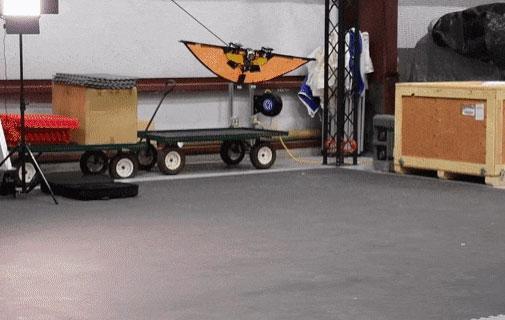 The military is constantly working on new drone technology. That includes new types of drones like autonomous boats and small swarming UAVs as well as ways to combat drones, like frying them with microwaves, guided bullets and hacking. Right now, the US Army is working on a small, lightweight drone that can take on a number of tasks depending on what's needed in a given situation.

The drone, which you can see in action in the video below, looks a little bit like a flying squirrel. It's small, weighing just over half a pound, and its rotors can tilt themselves, giving the UAV plenty of flexibility in how it moves around. The design goal is to create a drone that can easily integrate with soldiers in the field and have multiple uses. "You're not going to know ahead of time what you need that vehicle to do. It might need to go over the next hill, see what's there. It might just need to follow above you to kind of give you some scouting," Steve Nogar, a researcher working on the project, says in the video.

Next up for the small drone is the ability to perch. The developers want to give the UAV the ability to land on various objects in its surroundings, which will require it to sense the environment and do so very quickly. That level of design will need to integrate things like AI and fast perception, challenging given the stripped down design of the lightweight drone, which has just one camera.

Nogar and others are continuing to hone the drone's abilities at the US Army Research Laboratory at Aberdeen Proving Ground in Maryland.

In this article: ai, army, design, drone, gadgetry, gadgets, gear, military, robots, uav, UsArmyResearchLaboratory, video
All products recommended by Engadget are selected by our editorial team, independent of our parent company. Some of our stories include affiliate links. If you buy something through one of these links, we may earn an affiliate commission.