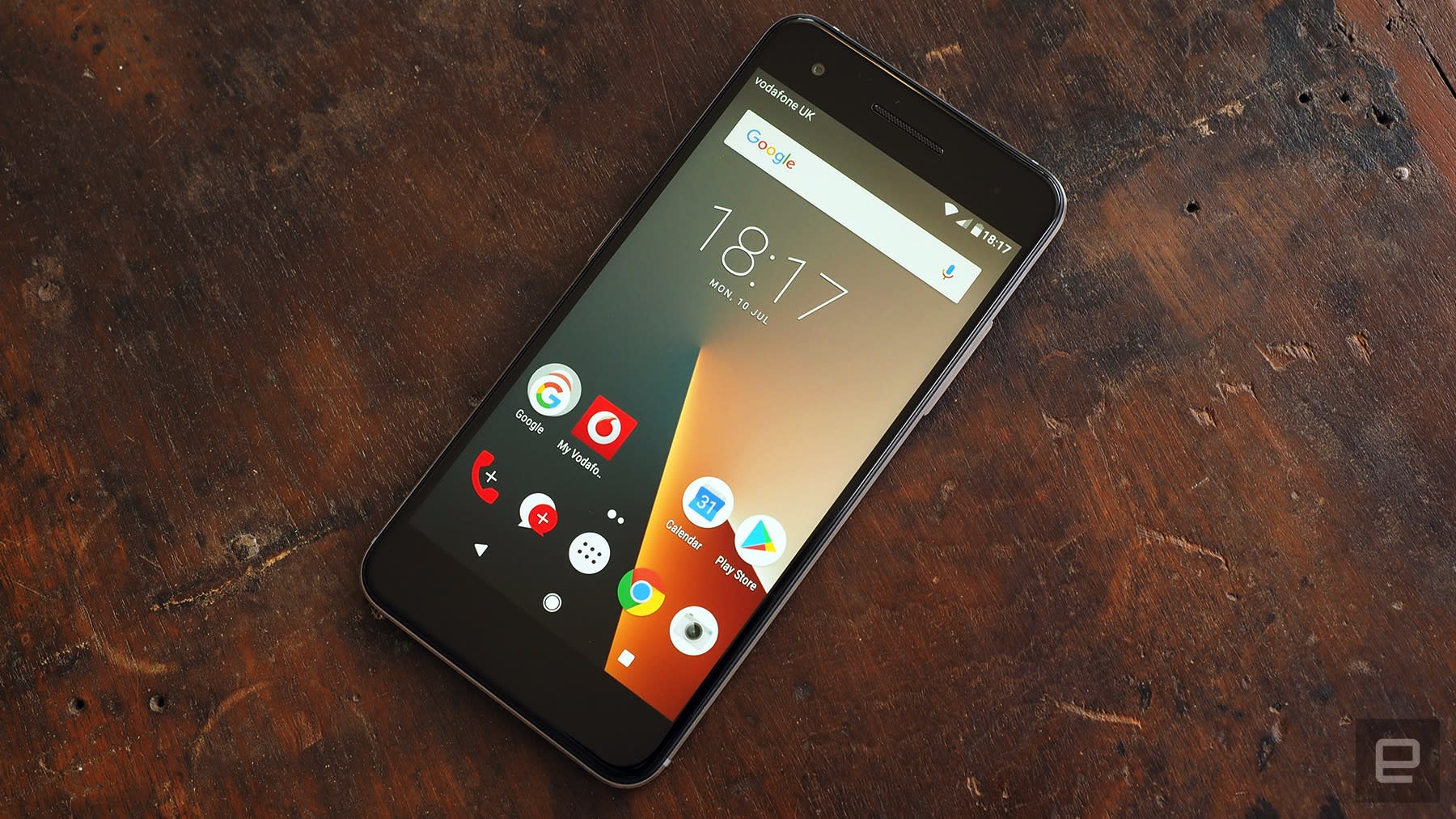 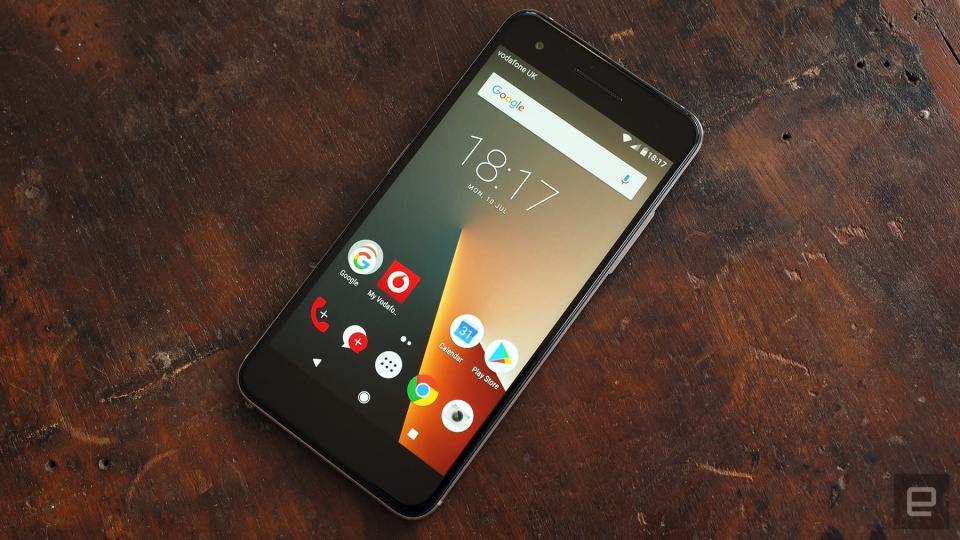 Vodafone's own-brand devices have been hit and miss over the past few years. There was the Smart Ultra 6, which was one of the best affordable phones of its time, and the Smart Platinum 7, which was an interesting step into more expensive, sub-flagship category. But alongside those, there have been a number of humdrum handsets that failed to impress. As per its yearly update cycle, Vodafone recently released new own-brand hardware, with the Smart V8 in particular slotting into the carrier's roster as one of the best affordable options. The most immediately striking feature of the Smart V8 when you free it from its box is the build quality. It's almost entirely brushed metal aside from two pockets of textured plastic, with neatly chamfered edges and loudspeaker grilles. While it's not pushing the boundaries of design by any means, it certainly looks and feels like it's punching above the £159 pay-as-you-go price point.

The spec sheet isn't to be taken lightly either. You're looking at a 5.5-inch, 1080p LCD display, an octa-core 1.4GHz Snapdragon 435, 3 gigs of RAM, 32GB of expandable storage, a 16-megapixel primary camera and 8MP front-facer, all powered by a decent-sized 3,000mAh battery. You also get a rear-mounted fingerprint sensor and NFC chip -- hello Android Pay. Perhaps even more important, the Smart V8 is running Android 7.1.1, so it's basically as up-to-date as you can get on the software front. It's more or less the stock Android experience, albeit with a few borderline-bloatware apps from Vodafone added in. One quirk I've discovered worth noting is I can't seem to resize widgets on the homescreen. Not a huge deal, but it does mean the digital clock widget is naturally off-centre, which is slightly irritating.

In sunny summer conditions, the 16MP camera can be pretty handy. Good colour saturation, clarity, and contrast thanks to the HDR mode. The app is pretty busy with filters and features and settings, from full manual control to long exposure and "active photo" modes (kinda like GIFs/Live Photos). You won't find much help in them in low-light conditions, though, where the camera begins to fall off fairly quickly. All in all, there's nothing particularly special about the Smart V8. These days, metalwork, this kind of spec sheet and value-added features like fingerprint sensor and NFC are becoming standard at the mid-to-low end. The new handset does have something going for it, though -- a pretty competitive price tag.

Vodafone's pay-as-you-go range is relatively sparse around the £150 mark. You've got the £149 Sony Xperia L1, which is less attractive enough on paper to justify the jump to the £159 Smart V8. The closest handset beyond that point is the fairly comparable £199 Huawei P8 lite (2017). The Moto G5 gets a nod too, obviously, as well as the Wileyfox Swift 2, since they can be bought elsewhere for bang on £159. You wouldn't say either of them are significantly better than the Smart V8, though. If you've set yourself a slightly tighter budget, Vodafone also recently launched the Smart N8, an £85 handset sitting in the crowded low-end of the pay-as-you-go spectrum. It's more than appropriately specced, with a 5-inch, 720p display, quad-core 1.3GHz MediaTek chip, 1.5GB of RAM, 16 gigs of expandable storage, 13- and 5-megapixel cameras, fingerprint sensor, NFC and 2,400mAh battery.

Despite looking a little on the drab side, it's a decent value device. You could always save yourself a London pint and opt for the £79 Moto G4 Play instead, which recently began receiving Android Nougat, but you would be sacrificing the fingerprint reader/NFC combo. But that's true of most other devices dipping below the £100 marker at the moment. While the two smartphones have obvious places in Vodafone's backroom, the new Smart Tab N8 is where things get confusing. The draw of pretty much all own-brand tablets is ultimate portability, thanks to 4G, at a reasonable cost. I wouldn't call the Smart Tab N8 very portable though, because it's massive. It's not that heavy at 465g and it's pretty thin, too, with 8.95mm between the glass front and textured, tactile plastic back -- it's that it's all face. Not only does the slate carry a 10.1-inch display, but a significant bloating of bezel around it. It's not something you could slip into a handbag and it not be a nuisance, let's say. Worse yet, that 10.1-inch screen runs at a very noticeable 1,280 x 800 resolution, making it easy to pick out individual pixels. Large tablets are typically geared more towards entertainment, but 149 ppi doesn't really cut it nowadays.

The other specs are largely irrelevant: A quad-core 1.1GHz MediaTek processor, 2 gigs of RAM, 16GB of expandable storage, 4,600mAh battery and 5MP/2MP cameras on the appropriate sides. Vodafone is selling the Smart Tab N8 on contracts starting at £16 per month for a 5GB data cap and no upfront payment. I'd sooner get exactly the same plan with Samsung's 10.1-inch Galaxy Tab A (2016), since it's been upgraded to Nougat already and waves a more alluring spec sheet, the 1,920 x 1,200 display being the most important upgrade. Hits and misses for Vodafone again, it would appear.

In this article: gear, hands-on, mobile, smartn8, smartphone, smarttabn8, smartv8, tablet, vodafone, vodafonesmartn8, vodafonesmarttabn8, vodafonesmartv7
All products recommended by Engadget are selected by our editorial team, independent of our parent company. Some of our stories include affiliate links. If you buy something through one of these links, we may earn an affiliate commission.