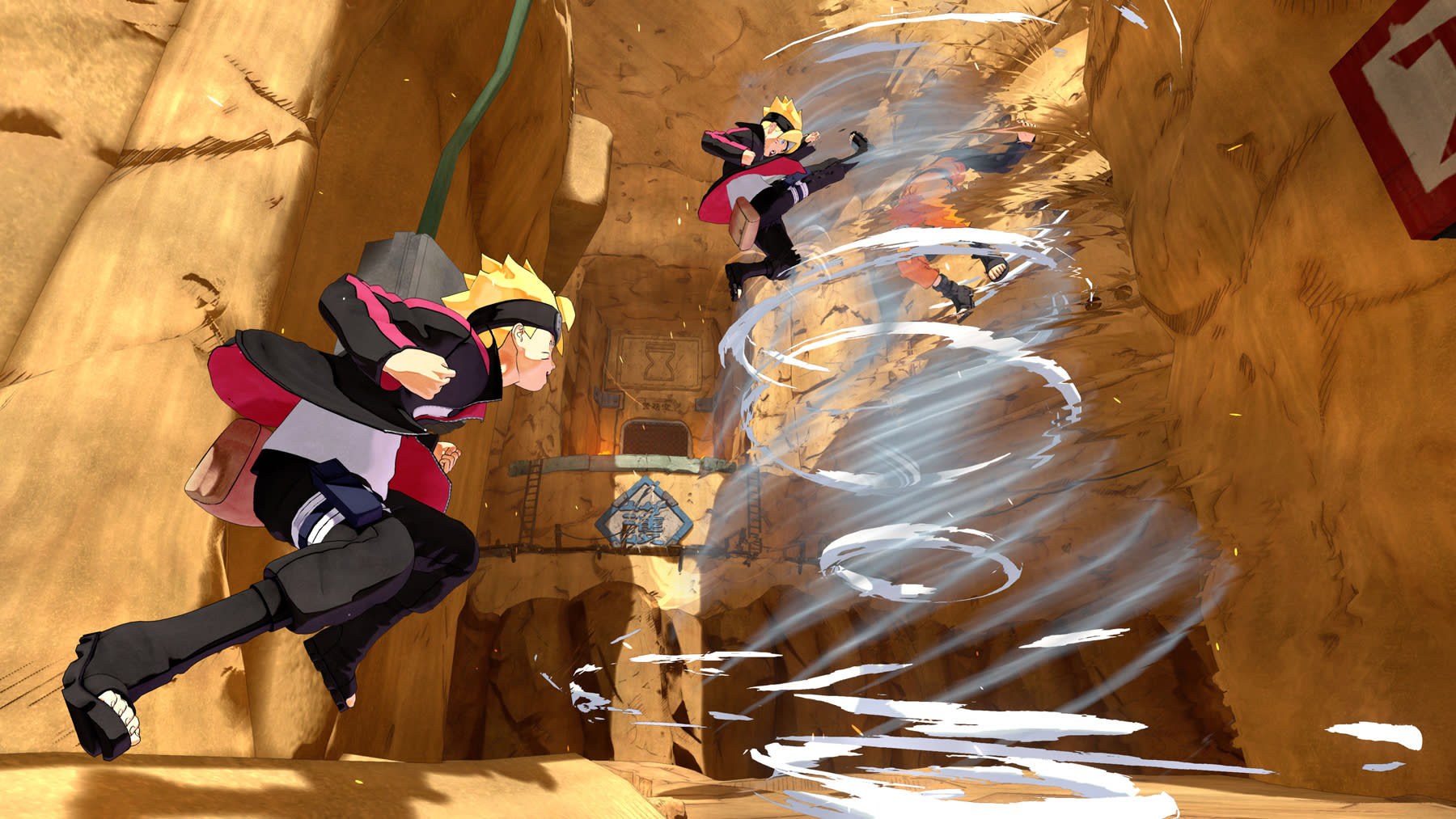 You can even make your own custom ninja.

Naruto is in a strange place right now. The long-running manga series ended in early 2015, before its anime adaptation wrapped up in March this year. The spiky-haired ninja saved the world and achieved his dream of becoming the Hokage, or rather the leader, of the Hidden Leaf village. But now there's Boruto, a new series about his boisterous son. Both the manga and anime are relatively new and it's not clear just yet if either will replicate the success of the original series.

That leaves Bandai Namco, the video game rights holder for Naruto, in a tough spot. The popular Ultimate Ninja Storm games allowed players to relive the events of the Naruto manga and anime, right up to the end of the first movie starring his son Boruto. But there simply isn't enough story material to make a new Boruto game at the moment. While everyone waits for the new manga to accumulate a healthy lead, Bandai Namco is trying something different with a game called Naruto to Boruto: Shinobi Striker.

The new title is a tactical, four-versus-four online brawler. Matches take place in large, three-dimensional arenas, giving players the freedom to move around, run on walls and jump across large chasms. For a Naruto game, this is pretty unusual. Most have opted for a traditional one-on-one fighter system with limited player movement on a small, circular stage. Shinobi Striker is expansive and built around two competitive modes, capture the flag and a control point-style "barrier battle." Conceptually, these feel out of place in the Naruto universe, but they're justified somewhat by the story, which is about some kind of ninja tournament.

While surprising, the team-based combat does have some deep ties to the show. In the Hidden Leaf village, ninjas are split up into three-person teams, typically with a fourth, older member to act as their teacher. "We wanted to put that in the game as a new experience," Noriaki Niino, the game's producer tells me through a translator. "And then, in the story, they say the most important thing for a shinobi is teamwork. So that's what we wanted to show in this game and build a new experience around."

The game is due in "early 2018" on Xbox One, PlayStation 4 and PC. Right now, it still feels like like an early prototype. At Gamescom I was able to try a few flag battles set in one of the forests surrounding Konoha, where Naruto, Boruto and their friends live. The knocked-over tree trunks and barbed wire fences are reminiscent of the manga, but the space is still quite small and feels like a stadium, rather than a natural slice of Naruto creator Masashi Kishimoto's ninja world. Again, that's all part of the "tournament" fiction, but I was hoping to feel a little more liberated in Shinobi Striker.

Capturing flags and running them back to your base can be quite mundane. A couple of times I was able to take a quiter "route" to the opposing base and pick up a flag undetected. Only once I was half-way back did someone notice and try to give chase, at which point I was disrupted mid-wall run and plummeted to my death. All of my progress was lost immediately. The combat, however, is exciting and true to the manga source material. Sasuke is able to shoot fireballs and Naruto has his classic "Rasengan," a powerful ball of wind. Each character has a mixture of light and heavy attacks which, if successful, unlock more powerful "jutsu" moves and awakenings. The iconic Naruto cast have been assigned one of four classes, which roughly equate to attack, defence, range and support. Much like Overwatch, success is dependent on understanding and utilising different team compositions. A big part of Shinobi Striker is the character creator, which lets you customise and train a ninja from scratch. Unlike the traditional heroes, these avatars are able to switch style between respawns. So you might want to push aggressively at the start with three attack types, before switching to a more balanced squad to see out the match.

"There is no real, 'best answer' for what is the best team," Niino says. "It all just depends on the situation."

Bandai Namco says you'll be able to train with the original Naruto crew and learn their jutsu. That includes Shikamaru's shadow stitching jutsu and Choji's spiky human boulder. For fans, this is pure wish fulfilment. It's a chance to build their dream ninja by cherry-picking techniques from the manga's most memorable characters. You won't obtain them all right away, however. It would be a little silly, for instance, if you could instantly learn Amaterasu, one of the most powerful techniques in the Naruto universe.

Unlocking them won't turn you into a one-hit K.O. machine, either. "If you could do that in the game, it would get boring," he suggests. So while there are some power differences between the various jutsu, they'll actually be quite small to maintain balance across the community.

Unfortunately, I wasn't able to create my own ninja. There was, however, some pre-built custom characters that I could switch to before a match. They looked pretty generic, with standard ninja jackets and headbands, but hopefully there will be some crazier options in the final game. The Ultimate Ninja Storm series was always generous with its costumes, offering outfits both from different eras and outside the Naruto universe. Shinobi Striker seems perfect for this kind of treatment and could be a way for players to explore little-seen or discussed parts of the world.

I also found the characters to be a tad slow. Niino says that's by design, however. "That's on purpose," he explains. "Because there are eight players on the field and if it's too fast, you won't be able to know what's going on." The team did try a faster version, but found it too quick for anyone to react or mount attacks properly. "So we kind of slowed it down a little bit," he adds. Niino stresses that because the game is in an early stage, character movement and other factors, including audio and visual effects, could change before the final version.

Naruto to Boruto: Shinobi Striker is being developed by Soleil, a subsidiary of Dead or Alive and Ninja Gaiden creator Tomonobu Itagaki's company, Valhalla Game Studio. That will be a disappointment to fans of the stylish Ultimate Ninja Storm series created by CyberConnect 2. In all aspects, then, this new game is a gamble. But what better time to take a gamble then now, before the next story-driven adventure game set in the Boruto universe? Shinobi Striker's competitive slant will be off-putting to some, but for those who crave a more serious fighter, this could be an engrossing spin-off.