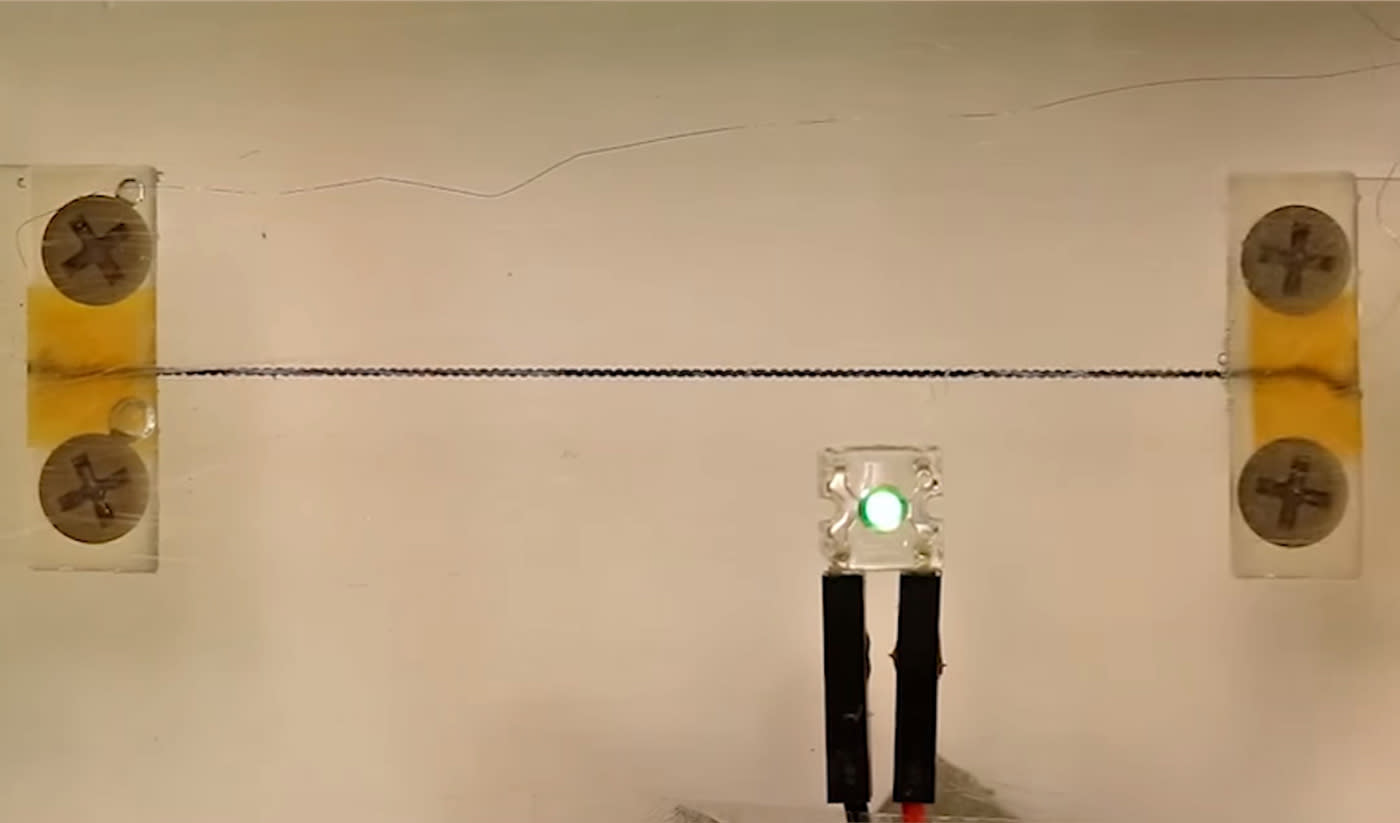 Wearable makers have long sought to harvest electricity from your movement, but current tech is expensive and inefficient. However, researchers from Texas and South Korea have discovered a promising method using our good old friend, the carbon nanotube. The team twisted the lightweight tubes into tight, elastic-like coils, so that they rotate and generate electricity when stretched. The threads (called "twistron") could lead to new types of generators or self-powered wearables that can track your heart rate and breathing.

As shown below, the nanotube threads must be spun very tightly to have the right amount of elasticity. When pulled, the change in volume and friction frees electrons from the threads, which can be released when dunked in an electrolyte like salt water. "When you insert the carbon nanotube yarn into an electrolyte bath, the yarns are charged by the electrolyte itself," says research lead Dr. Na Li. "No external battery, or voltage, is needed."

The energy generated from a single thread is enough to power an LED, and when lumped together, they can put out 250 watts per kilogram when stretched at 30 times per second. "No other reported harvester provides such high electrical power or energy output per cycle as ours for stretching rates between a few cycles per second and 600 cycles per second," said Li.

In the lab, the team sewed twistron harvesters into a shirt, with the electrolyte integrated via o a gel also woven into the fabric. When subjects breathed normally, it generated an electrical signal that could power a wearable tracker, for instance.

The team also sought to find out if ocean waves could both stretch the nanotubes and act as an electrolyte. They waded into the South Korean surf and placed a 4-inch piece of the yarn weighing about the same as a mosquito between a float and a sinker. That stretched the yarn about 25 percent and generated a small amount of current.

As with all things nanotube, however, cost is an issue. "If our twistron harvesters could be made less expensively, they might ultimately be able to harvest the enormous amount of energy available from ocean waves," said co-author Dr. Ray Baughman. He adds, though that they're perfect for wearables. "Just 31 milligrams [.001 ounces] of carbon nanotube yarn harvester could provide the electrical energy needed to transmit a 2-kilobyte packet of data over a 100-meter radius every 10 seconds."

In this article: electricity, gear, green, Nanotubes, power, stretch, video, wearables, yarn
All products recommended by Engadget are selected by our editorial team, independent of our parent company. Some of our stories include affiliate links. If you buy something through one of these links, we may earn an affiliate commission.