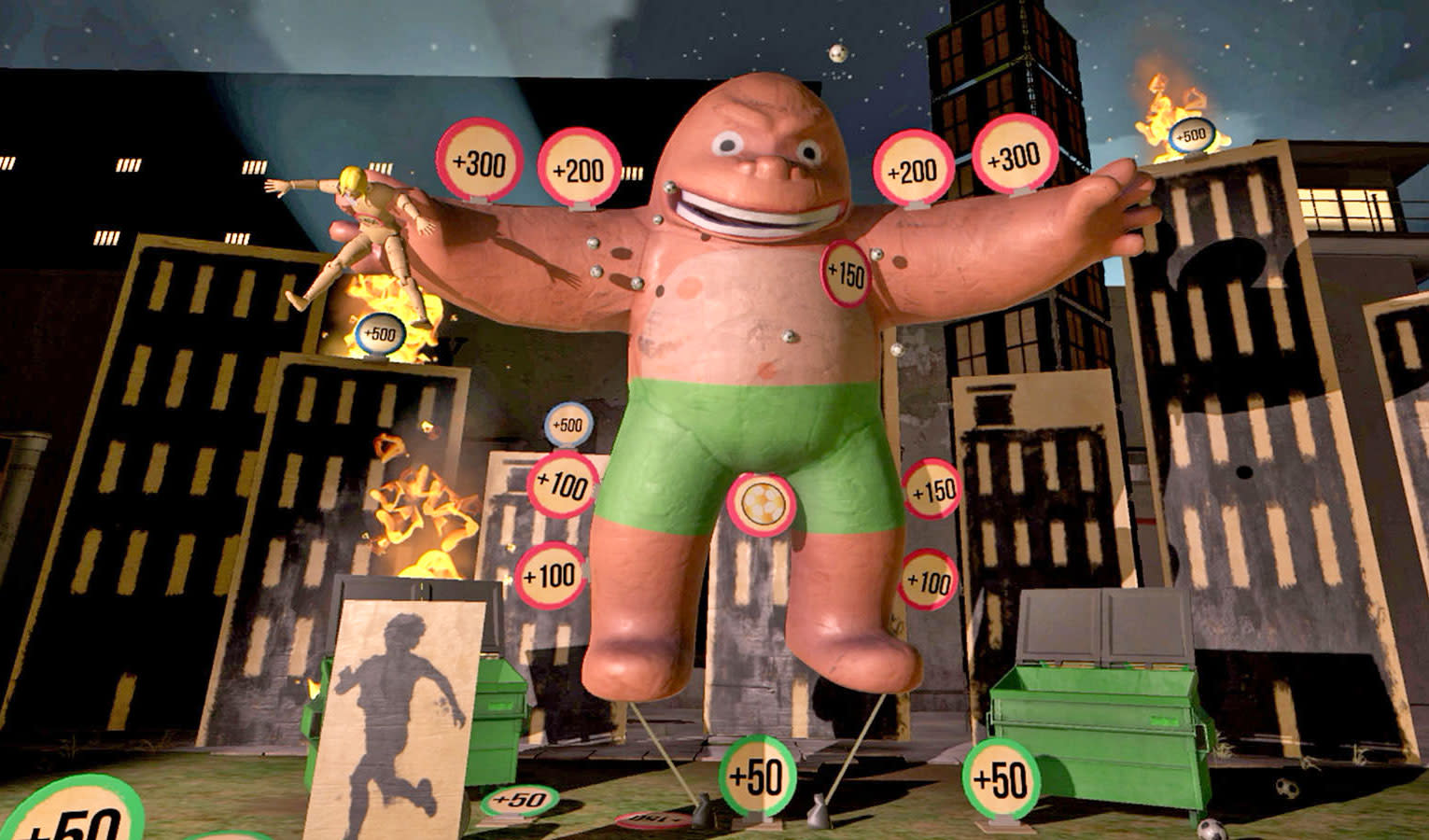 With VR going mainstream, families are going to be looking for titles that won't give their kids nightmares. One of the best of those, Headmaster, has only been available on Sony's PlayStation VR until now, but today it arrives to the Oculus Rift and SteamVR in a surprise launch. Described by the developer Frame Interactive as the "bizarre love child of Wii Sports and Portal," it simulates soccer heading (football, if you like) in a surreal, carnival-like "Football Improvement Center."

The game is easy to grasp, which is one of the reasons for its popularity on the PSVR. You simply head a simulated soccer ball with the same motion you'd use in real game, and the motion tracking and graphics takes care of the rest. The balls come in streams from all over the place, and along with nets, you aim at pinatas, rubber duckies and a rotating dummy using a "knife ball."

There's a fairly elaborate backstory, as developer Frame Interactive describes: "You are a professional soccer player who had a bad season, so your club sent you to The Football Improvement Centre (FIC), which is not a prison. There you learn The Proper Heading Motion™ and enthusiastically participate in your re-education by passing lessons and exams until you graduate."

Headmaster's physics are well done, according to critics. A slow head nod will lob the ball in a curve, while a sharper snap will send it like a cannonball. "The physics feel so accurate, it's jarring not to feel the impact of an actual soccer ball on your forehead," Wired wrote.

A metacritic user adds that Headmaster creates the atmosphere of being "alone on a full size pitch, heading real balls into a full-size goal," thanks to the solid game physics. "Mistakes always feel like the fault of the player and not the game." That could be in part due to Sony's PSVR headset, but there's no reason why that won't carry over to the Oculus Rift and HTC Vive.

The developer says it worked hard to keep the "surprise launch" for PC VR systems under wraps, much as Rez Infinite managed to do. There are a few new features on PC: It introduced a "lonely party mode" that supports one whole player but does let you compete against other scores. There's also a "practice zone" to buff up your skills, and a "stadium level," which is just the same thing but in a giant stadium. The latter feature that will be used at an upcoming Headmaster tournament at Pax West, the developers say.

Finally, there's something called no hands support. "After thinking about the Football Improvement Centre's strict NO HANDS policy, we created Handball Avoidance Mitts, which 'some people' would say are dirty oven mitts wrapped in duct tape," Frame Interactive jokes. It's not clear how that affects gameplay (a GIF shows it above), but the feature is currently in beta and not enabled by default. Headmaster is available starting today -- check Frame Interactive's Headmaster site for more info.

In this article: av, Football, gaming, Headmaster, Oculus, PSVR, Soccer, SteamVR, video, VirtualReality, wearables
All products recommended by Engadget are selected by our editorial team, independent of our parent company. Some of our stories include affiliate links. If you buy something through one of these links, we may earn an affiliate commission.