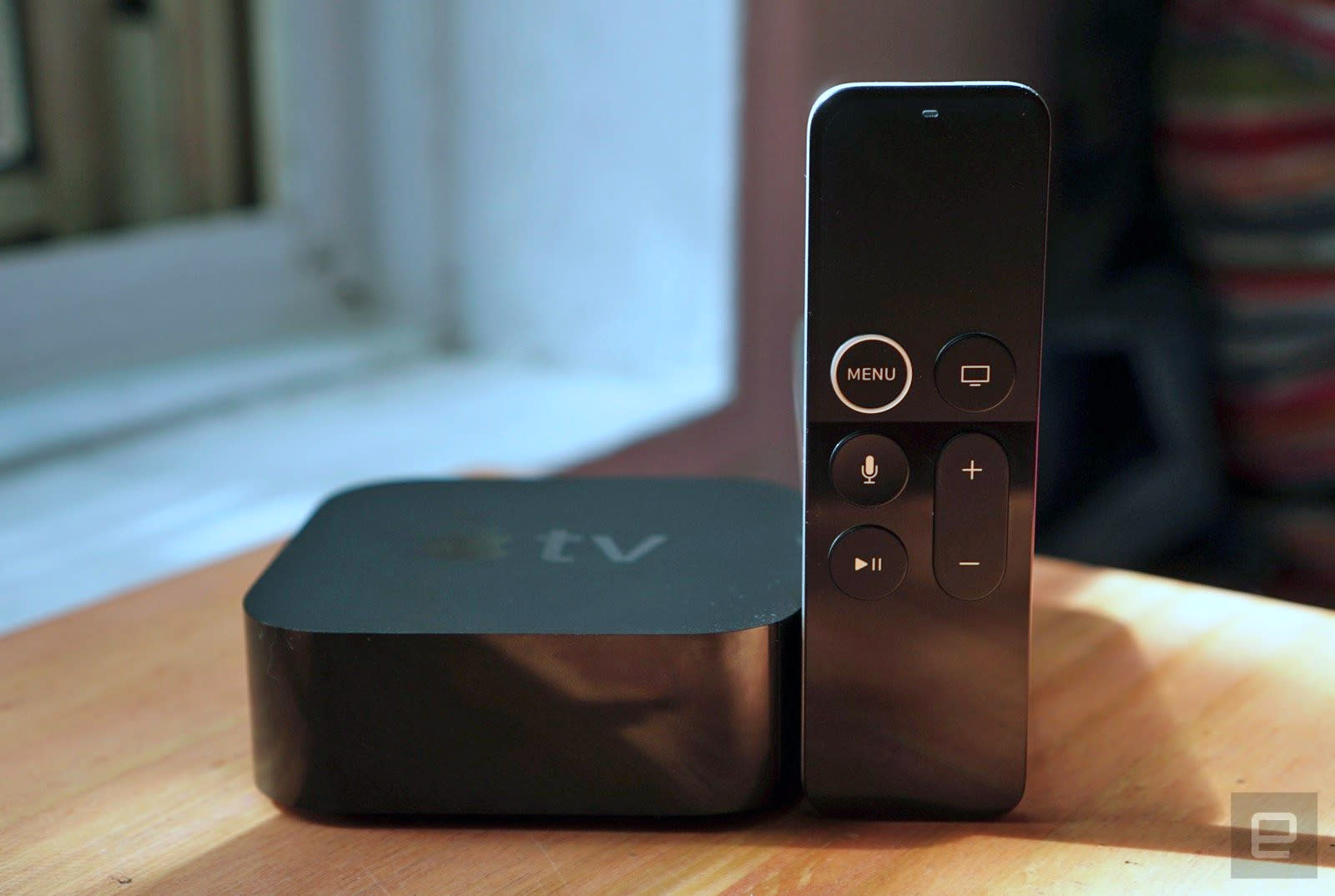 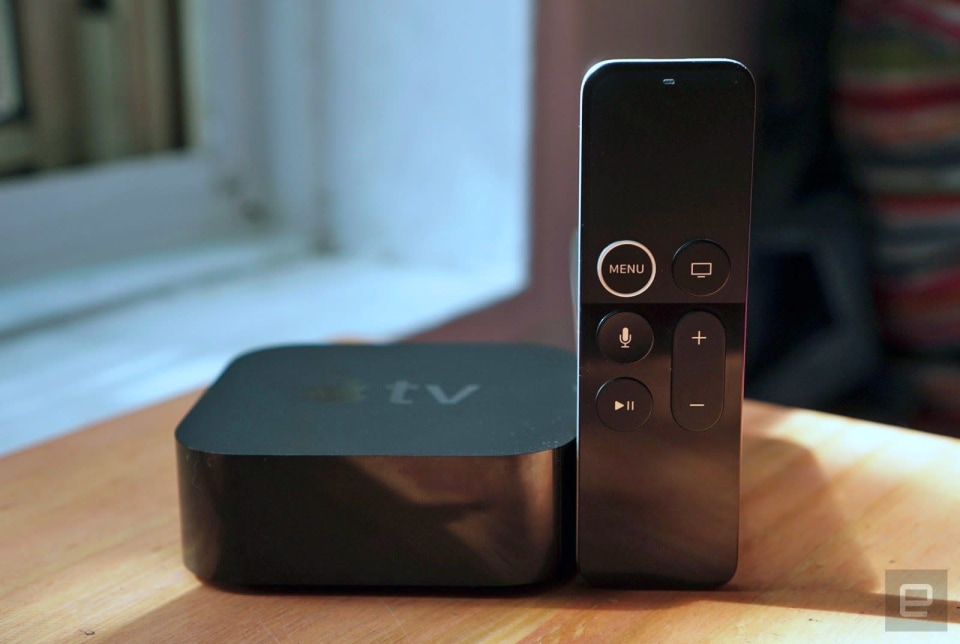 Apple's long-awaited fourth-generation Apple TV was almost a slam dunk. The only problem? It didn't have 4K. That was a notable omission since both Amazon and Roku released streaming players supporting the new format in 2015. Now, Apple is finally ready to enter the ultra-high-definition fray with the Apple TV 4K. But, as usual with 4K hardware, the real star of the show isn't the resolution bump over 1080p -- it's support for high-dynamic range (HDR) video. And in typical Apple fashion, they've also figured out a few ways to make all of this new technology more accessible than the competition. I've only spent a day with the Apple TV 4K so far (our full review is coming next week), but I can already tell that it's the streaming box I've been waiting for. While I was mostly positive on the last model, its lack of 4K became a sticking point when I upgraded to one of LG's 4K OLED TVs last year. I ended up relying more on my set's built-in apps to enjoy 4K/HDR content, and I only hopped over to the Apple TV when I needed to use iTunes (my preferred platform for digital purchases) or specific streaming apps. That's no longer an issue with the new box -- it can satisfy all of my media needs.

Before we go any further, it's worth explaining the real benefits I'm talking about: 4K video delivers four times as many pixels as 1080p HD, which means it'll look sharper on larger screens. And I do mean large -- you probably won't be able to tell the difference in resolution unless you're sitting very close to a TV that's at least 55-inches. HDR, a feature on many 4K TVs, is the more noticeable upgrade. Basically, it lets you see video that's both brighter and darker than before. Apple also wisely chose to support both HDR standards, HDR10 and Dolby Vision. While 4K is the big buzzword right now, HDR is what your eyes will instantly notice. 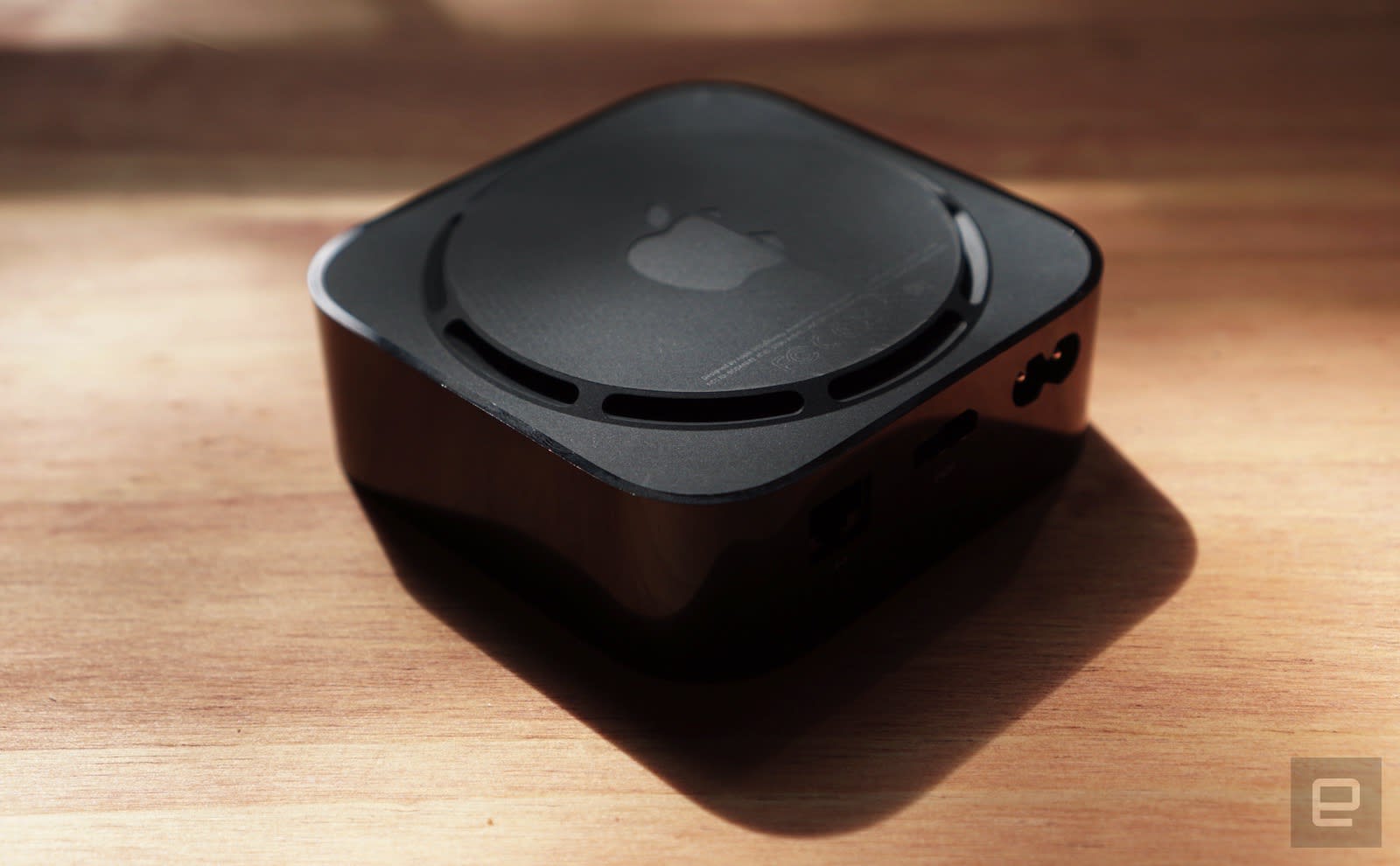 The Apple TV 4K looks almost the same as the last model, with one small difference: Its base is raised slightly to allow for better airflow. That's not too surprising, since it's using Apple's A10X Fusion processor, which is far more powerful (and generates more heat) than its predecessor. Beyond that, it has the same stubby design as the fourth-gen Apple TV. On the back, all you've got is a Gigabit Ethernet jack, an HDMI port and a power slot. Apple dropped the USB-C port from the last model, which was mainly for diagnostic and administrative purposes.

Also making a reappearance is the slim remote that came alongside the last Apple TV. It's also mostly the same except for a white ring around the menu button. That lets you know when you're holding the remote correctly without actually looking at it. Given that that was one of the major complaints about the last remote, it's a good thing Apple came up with some sort of fix. Aside from that tweak, though, the new model won't win over people who didn't like the last version.

Setting up the Apple TV 4K didn't take much effort. After plugging it in, I held up my iPhone next to it, punched in a security code and the set-top box then sucked in my WiFi and iCloud account details. I reached the home screen within a few minutes, just like when I set up the last model. And thanks to the One Home Screen setting in tvOS 11, which stores your app layout in iCloud, all of the software from my last Apple TV automatically installed. I still had to manually log into iCloud and each of my streaming apps, though.

As you'd expect, the Apple TV 4K didn't have a problem choosing the right screen resolution for my set. But I was surprised to find that it automatically enabled HDR10 on my TV, as well. It turns out that the box keeps HDR enabled all the time to avoid unsightly switching from regular SDR (standard dynamic range) mode. With some TV sets, that process involves your screen going dark for around five seconds -- not exactly the smoothest consumer experience. It makes sense for Apple to keep HDR enabled, anyway, since the entire Apple TV interface is rendered to support the new formats. (Update: It turns out the Apple TV enables HDR10 at 60Hz on my TV, not Dolby Vision. But the Dolby Vision films I viewed definitely had HDR working properly.)

You'll find Apple's first batch of 4K HDR films in their own section on the iTunes store. So far, the selection includes some major new releases like Wonder Woman, Baby Driver and Alien Covenant. Notably, they're mostly selling for $20, with a few older titles going for $15. Walmart-owned Vudu, which has been selling and renting 4K films for years, currently has those titles for $30. Even the rental prices for 4K are lower on iTunes -- $6 versus $10 on Vudu. And, just as Apple promised, several films I previously purchased on iTunes -- Star Trek Beyond, The Lego Movie and Kingsman were automatically upgraded to 4K HDR.

When Apple announced its ambitious pricing model, I argued it would be huge for the 4K market. Now that I'm actually seeing it in action, it seems like only a matter of time until Vudu (which launched on the Apple TV last month) drops its prices to match. That's a win for all consumers, not just Apple fans.

So how do the 4K films actually look? Simply put: stunning. Kong: Skull Island started playing within a second, and it was sharp from the get-go, with no need for buffering. It's a film with plenty of explosions, gorgeous natural imagery and giant monsters, all of which made it the perfect 4K/Dolby Vision demo. When Kong stands in front of the bright tropical sun, I had to shield my eyes a bit -- it was almost as if I was looking at actual daylight. And since there are plenty of dusk and night scenes, the film really shows off HDR's ability to add more detail to darker scenes.

When Apple announced its ambitious pricing model, I argued it would be huge for the 4K market. It seems like only a matter of time until Vudu (which launched on the Apple TV last month) drops its prices to match. That's a win for all consumers, not just Apple fans.

The jungle setting and monster designs also give the added resolution a chance to shine -- at times I could make out individual hairs on Kong's face and blades of grass on the ground. I also checked out trailers for several films, including Baby Driver, Edge of Tomorrow and Kingsman, but it's unclear at this point if they're actually displaying in 4K/HDR. They look better than standard HD trailers, but we're waiting to hear back from Apple for confirmation. So far, the only third-party app that supports 4K is Netflix, but Apple says Amazon's upcoming Prime Video app will offer it as well. 4K is also coming to the YouTube app soon, and Apple is negotiating with Hulu to enable it eventually. (So far, Hulu only supports 4K on game consoles.) 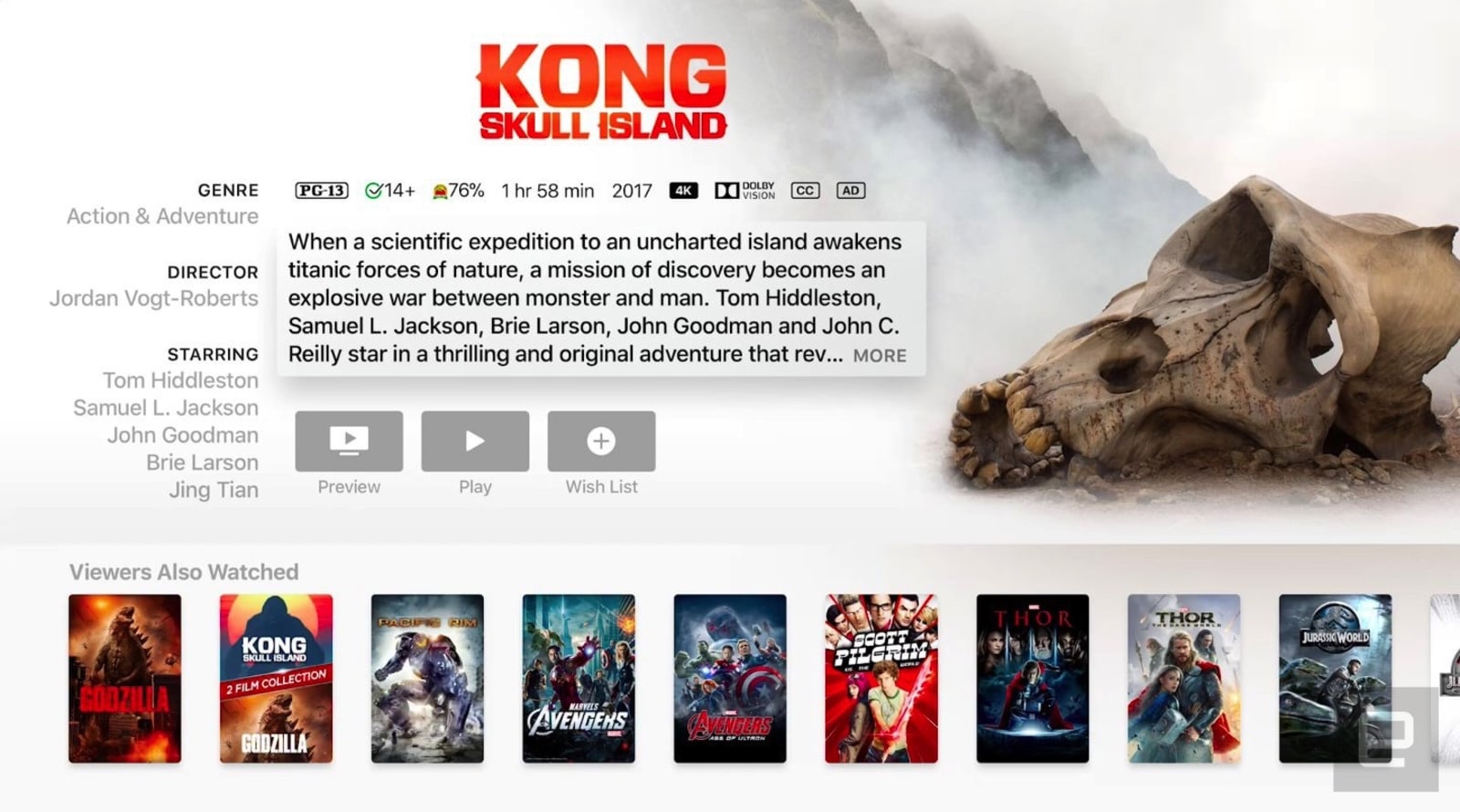 As for games, I didn't have access to any new titles, but Transistor loaded up quickly and played more smoothly than it did on the last Apple TV. Honestly, Apple has squandered the box's gaming potential so far, but hopefully that'll change with this new version. The company has already nabbed a killer exclusive with Sky, an upcoming title from Journey creator Jenova Chen. I also saw Playdead's indie hit Inside running on the box, and it didn't look much different from the Xbox One version I've already played.

There are still potential downsides to Apple's new set-top box. Its support for surround sound audio tops out with Dolby 7.1 -- not the newer and more immersive Atmos format and DTS:X formats. And, at the moment, Apple isn't offering any iTunes TV shows in 4K. But those are both things that can change over time with some licensing deals and software updates. 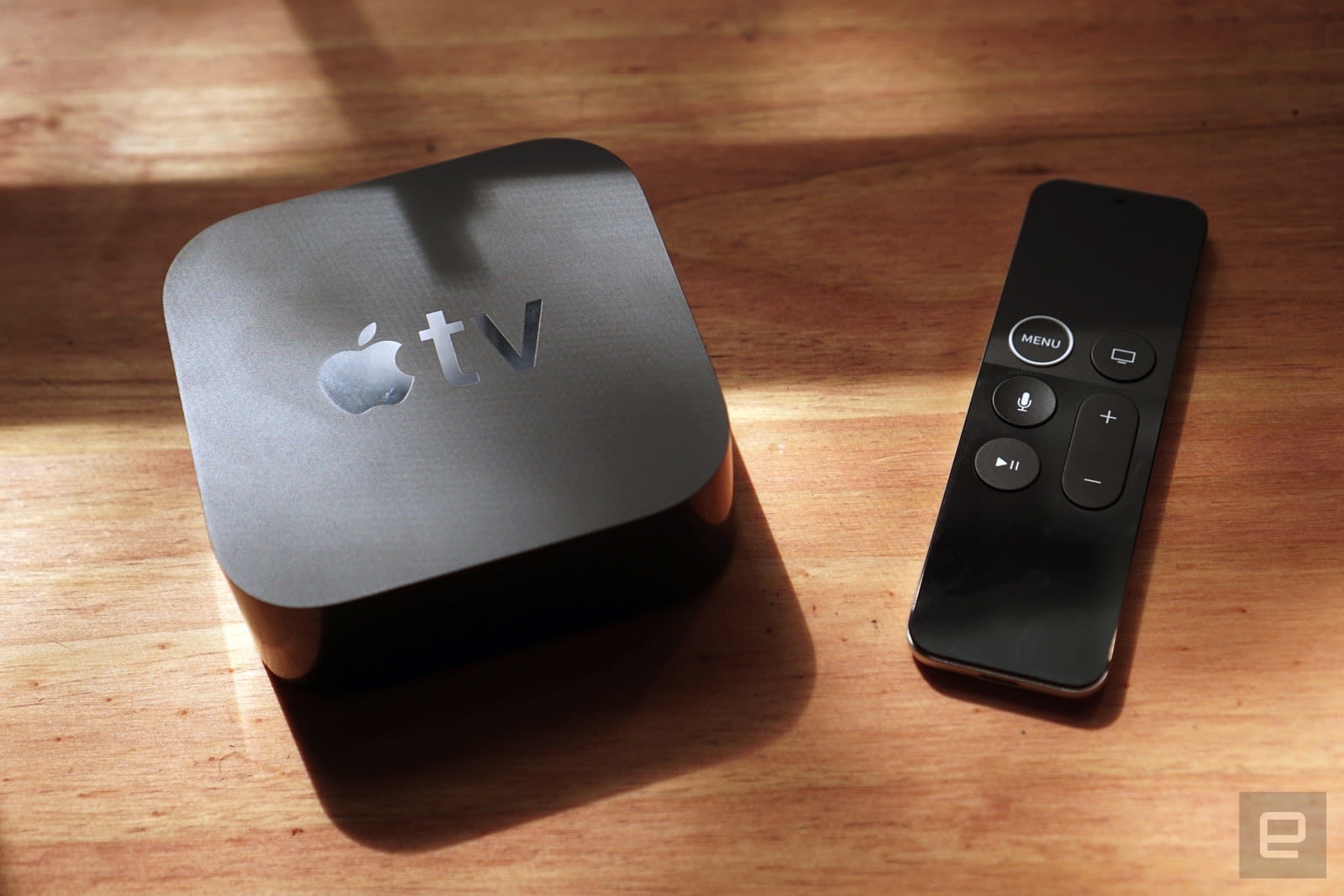 Overall, the Apple TV 4K handled high-resolution films just as well as Vudu does natively on my TV. It's tough to tell how well it compares to 4K Blu-ray, which is currently the highest quality way to watch anything in your home. I'll dig deeper into that for our full review next week.

In this article: 4K, apple, AppleTV, AppleTV4K, av, entertainment, gadgetry, gadgets, gear, hands-on, HDR, UHD
All products recommended by Engadget are selected by our editorial team, independent of our parent company. Some of our stories include affiliate links. If you buy something through one of these links, we may earn an affiliate commission.