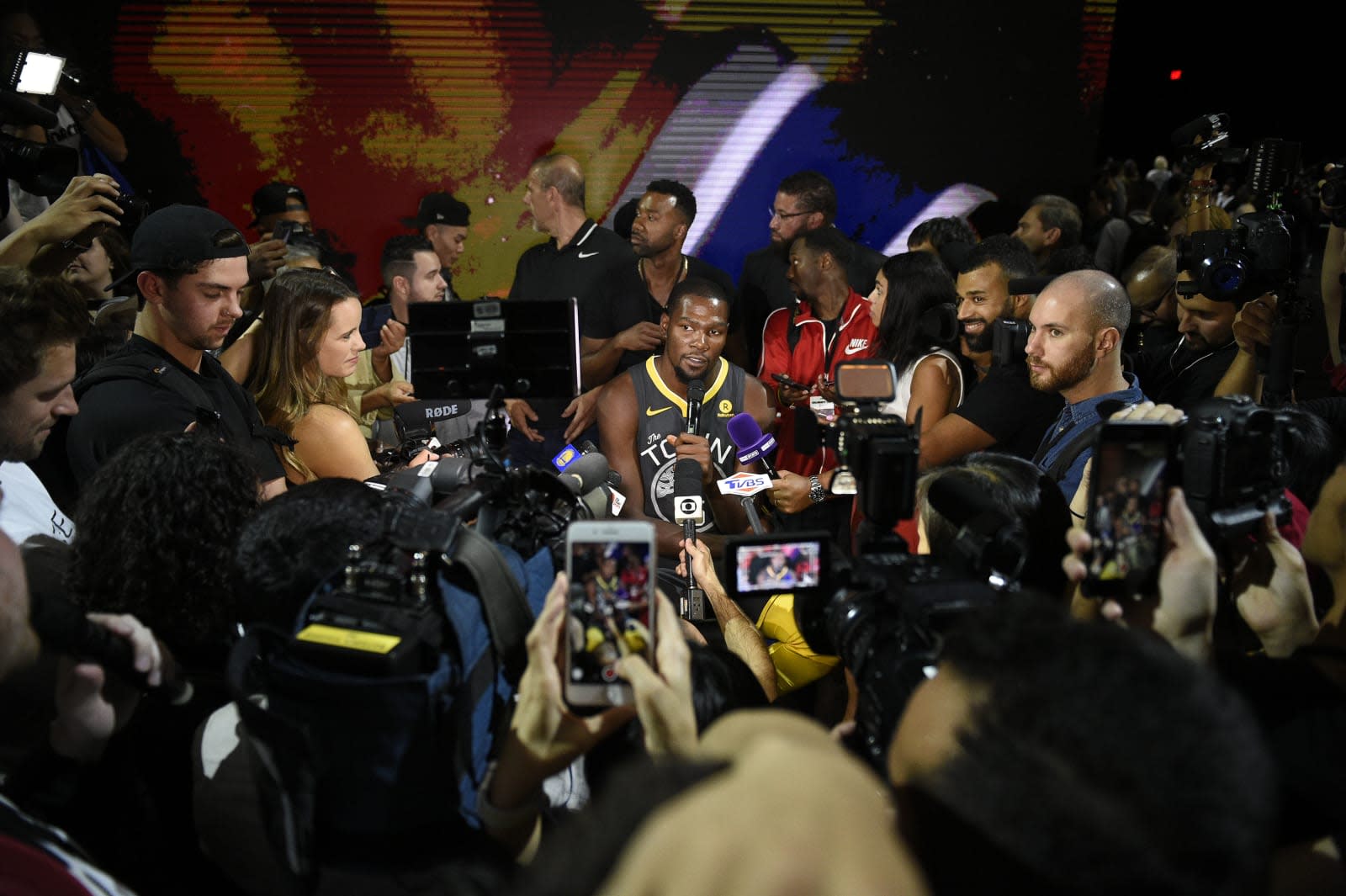 What does an NBA champion and Finals MVP have in common with Taylor Swift? In the case of the Golden State Warriors' Kevin Durant, it's that internet trolls love calling them snakes. Swift earned that label last year after a feud with Kim Kardashian and husband, Kanye West; for Durant, that scorn came after he decided to leave the Oklahoma City Thunder to join a main Western Conference rival, the Warriors. Since that day, July 4th, 2016, his mentions have been overtaken by angry basketball fans calling him a cupcake, coward, sellout, traitor and, yes, a snake. That's right, a cupcake and a snake.

Durant has claimed that these negative interactions on Twitter and Instagram don't bother him, but the evidence suggests otherwise. Earlier this week, a user sent him a tweet saying, "man I respect the hell outta you but give me one legitimate reason for leaving okc other than getting a championship." Through his @KDTrey5 account, Durant replied, "he didn't like the organization or playing for Billy Donovan. His roster wasn't that good it was just him and russ [Russell Westbrook]." In a separate tweet, he continued, "imagine taking russ off that team, see how bad they were. Kd can't win a championship with those cats."

KD has secret accounts that he uses to defend himself and forgot to switch to them when he was replying to this guy I'm actually speechless pic.twitter.com/9245gnpa3c

Given Durant's history of not shrinking from confrontations with bitter OKC fans who can't get over the fact he became a free agent to go to the Warriors, his response wasn't particularly newsworthy. What was surprising was how we defended himself in the third person. And although he hasn't confirmed the existence of a burner Twitter account, all signs point toward that being the case. After all, this is a guy who once responded "your mother" when someone asked if he was softer than the football program at the University of Texas. Why, then, would he refer to himself as KD? Twitter users started wondering the same, and it wasn't long before Durant's third-person tweets went viral.

Was he hacked? Have we reached peak Kevin Durant? Did someone from his entourage take it upon themselves to stand up for him? Or did he simply have another account that he used to defend himself from time to time? As it turns out, Durant revealed at the TechCrunch Disrupt conference this week that it was indeed he who sent those tweets bashing his former team -- but he didn't explicitly say if he did that thinking he was using another account. "I use Twitter to engage with the fans," he said. "But I happened to take it a little too far, that's what happens sometimes when I get into these basketball debates. What I really love is to just play basketball, and I went a little too far."

Apparently, he's so embarrassed that he hasn't been able to sleep or eat since posting those tweets, so you know he definitely regrets not switching to his presumed ghost Twitter account. The thing is, Durant is already one of the most-hated men in the NBA, and this latest gaffe won't help. Some of his peers have already started mercilessly mocking him on social media, making comical comments and creating hashtags like #burnertwitter. Thanks, Joel Embiid.

This is hardly the first time Durant has been roasted he's endured regular backlash over the past year on Instagram and Twitter, platforms where he frequently engages with NBA fans. And by "engages," I mean he's not afraid to share his opinion with the world -- even if, as mentioned earlier, sometimes it leads to "yo momma" jokes. Last month, another user sent him a tweet saying, "Never have someone like @KDTrey5 on ya team because they'll switch up on you when they think times are rough." Durant replied: "Cool, ill give u 30 if you don't want me on your team chump." Then there's this one:

By now, the list of sour words used to describe Warriors-era Durant is so long and well-documented that his sponsor Nike actually designed a sneaker that reflects his meme status. Seriously, it's called the KD 10 Finals, and it features a sole with text of all the bad things he was called during his first season in the Bay Area. "Cupcake," "soft," "sellout," "snake," "pathetic," "can't beat 'em, join 'em," they're all part of the shoe. The name-calling didn't just come from the disappointed OKC faithful either, but also fans of other teams and even his ex-teammates. And it all seems to have caught up to him this week.

"I don't regret clapping back at anybody or talking to my fans on Twitter," he said at Disrupt, where he was on a panel discussing his investments in the tech industry. "I do regret using my former coach's name, and my former organization that I played for. That was childish, that was idiotic, all those type of words. I regret doing that, and I apologized to them for doing that." Durant says he will now "scale back" his social-media usage and instead plans to focus more on playing basketball: "I want to move on from that. I was really upset with myself. I definitely want to move on and keep playing basketball. But I still want to interact with my fans as well." 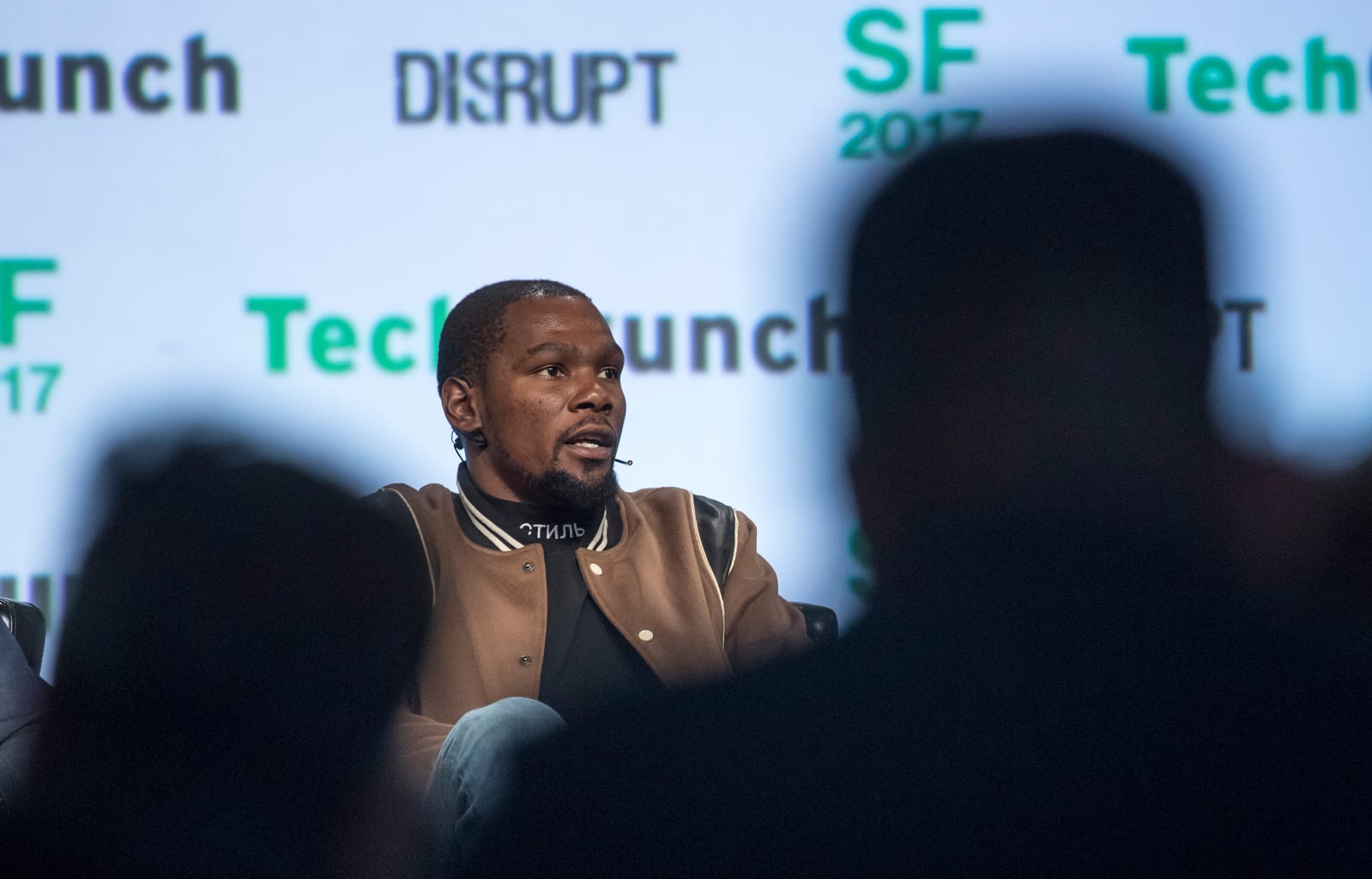 “I do regret using my former coach's name, and my former organization that I played for. That was childish, that was idiotic, all those type of words. I regret doing that, and I apologized to them for doing that.”

As for Durant's secret Twitter account, no one has been able to find it, meaning we may never know how many more times he had his own back. That's a shame, really, because if it does exist there's probably some clever stuff that we'll forever miss out on. Either way, Durant's actions showed that the adverse reaction from fans has, in fact, affected him. Otherwise, why would he be out there with a fake Twitter account, defending himself from trolls?

Still, he's lucky his situation is sports banter more than anything, not serious online abuse like other famous people have had to deal with in the past. Maybe Kanye West, Solange and Ed Sheeran have found the perfect formula to live a stress-free life: Vanish from social media, even if it's only temporary.

In this article: basketball, celebrities, entertainment, facebook, instagram, internet, kanyewest, kevindurant, kimkardashian, nba, socialmedia, socialnetwork, sports, taylorswift, twitter
All products recommended by Engadget are selected by our editorial team, independent of our parent company. Some of our stories include affiliate links. If you buy something through one of these links, we may earn an affiliate commission.